Should President Donald Trump fail to deliver his ultimate regional deal, the Palestinians could opt for German Chancellor Angela Merkel to take the lead on relaunching peace talks with Israel. 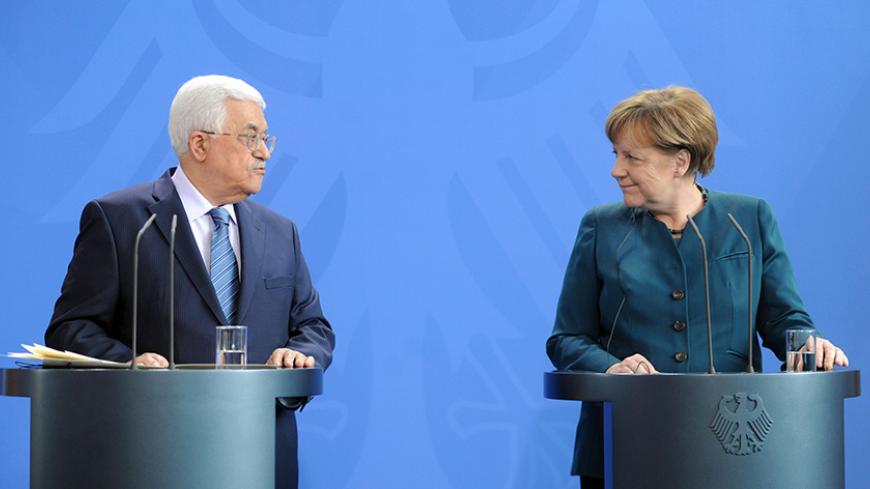 A senior Palestinian minister close to President Mahmoud Abbas told Al-Monitor that the Palestinian leadership is ready to seriously engage with the Trump administration on moving ahead with plans for a regional deal for Palestinian-Israeli peace. The senior PLO official said on condition of anonymity, "We are showing great flexibility, as directed by President Abbas, on the phrasing of the condition to freeze settlement construction — restraining it to the existing built areas of settlements."

He added, "We are not rigid on the outlines for opening a regional peace conference. Abbas is ready to start serious permanent status negotiations with [Prime Minister Benjamin] Netanyahu and his team, beginning with borders and security — where both sides will have to show their respective maps — and with a parallel process of normalizing Arab states’ relations with Israel.”

The minister acknowledged that it is the Palestinian leadership’s decision to give President Donald Trump, as the leader of the free world, the chance to seriously intervene with his strong negotiation skills in favor of a two-state solution. As part of this strategy, Abbas is fully coordinating with Egyptian President Abdel Fattah al-Sisi, Jordanian King Abdullah II and Saudi King Salman bin Abdul-Aziz Al Saud. According to Palestinian sources, a special Abbas envoy visited Riyadh last week, in the midst of the crisis with Qatar, to coordinate positions and the insertion of the 2002 Arab Peace Initiative into the negotiation process. “Our proactive strategy is producing positive dividends in terms of Trump’s adviser’s more positive attitude to Ramallah, and in terms of Netanyahu's being increasingly on the defensive,” the minister said.

The minister believes there are chances for a renewal of the peace process under the auspices of Trump. Yet, given Trump’s domestic troubles and Netanyahu’s positions, he believes Ramallah must have a fallback position in the diplomatic realm. “Unlike many others in the international community, the Palestinian president has not given up on Donald Trump," he said. "But should Trump disappoint, like others in the international community, we have decided to opt for German Chancellor Angela Merkel, in conjunction with French President Emmanuel Macron, to take the lead in preventing a deadlock in the peace process." He grinned when he said, “As in Leonard Cohen’s famous song: ‘First we take Manhattan, then we take Berlin.'"

The minister said Ramallah is in close contact with German Foreign Minister Sigmar Gabriel regarding Berlin's taking more of a lead role on a two-state solution. A senior official in the German Foreign Office told Al-Monitor that Merkel is now ready to play a more active and independent role on Middle East policy. The source said German goals in the region are to be part of a Western-Arab coalition against terrorism, to uphold the Iran deal and to advance the Israeli-Palestinian peace process based on a two-state solution.

Germany has traditionally been reluctant to play a role in the Israeli-Palestinian issue given the country's special relations with Israel. Yet Merkel is concerned that the US administration will not produce a viable diplomatic process, and that Trump’s aims in the region are mainly related to American business interests in the Gulf and to an anti-terror perception.

The German source emphasized that Germany does not want in any way to predetermine permanent status issues. It is strongly opposed to Israeli settlement policy and wants to strengthen Abbas’ posture. According to the official with direct access to Merkel, the chancellor is ready to create a regional economic framework in favor of a two-state solution. The idea raised in German policy planning circles is to propose an “EU Marshall Plan” for Israel and the Palestinian Authority in close cooperation with the Arab League.

Such a plan would offer several incentives for a two-state solution. For instance, it could offer upgrading nonmember status within the EU on trade and scientific cooperation. It could also propose EU economic assistance such as institution-building to the Palestinian state in the making, and German security assistance to Israel. Additional incentives could be normalization programs between the Arab states and Israel; a greater role for NATO in the anti-terror struggle and the monitoring of the security arrangements for the two-state solution; and the establishment of a regional development bank for the sake of achieving regional economic cooperation.

The German Marshall Fund of the United States, headed by former White House official Karen Donfried, is also engaged in these plans. A senior Israeli Foreign Ministry official told Al-Monitor on condition of anonymity that Israel will categorically oppose any European or German role in the peace process. The Israeli official said, “We will work only with the Trump administration, and we have the US president’s commitment to prevent any European, French or German initiatives on the regional peace process.”