While unrest continues in Jerusalem and the West Bank, and despite opposition from Palestinian President Mahmoud Abbas, Fatah militants might stop objecting to an intifada and even take the lead. 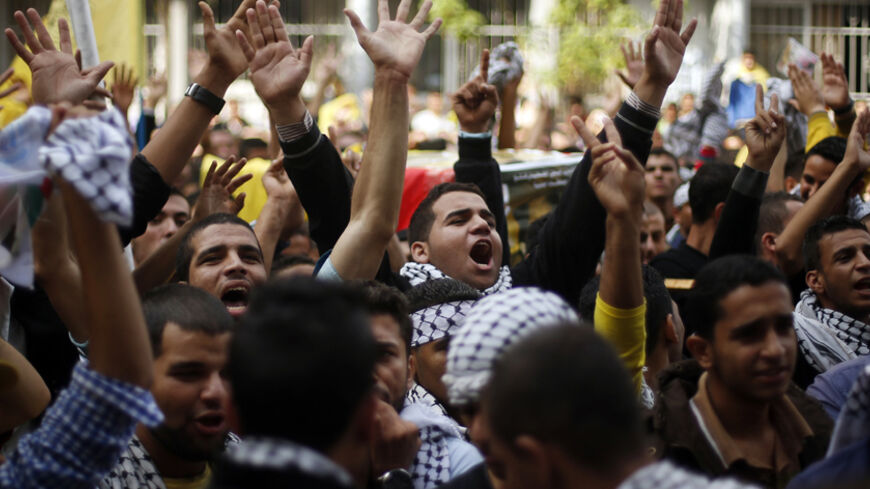 One of the leading members of the Fatah young guard from Hebron told Al-Monitor that Fatah will not object anymore to an intifada if the unrest in the West Bank and East Jerusalem continues.

"We are against terror but cannot quell the popular unrest. It is not the preference of our leader [Mahmoud Abbas], but if the popular uprising that has erupted in Jerusalem escalates, then we will take the lead."

He then continued with a lengthy monologue, which typifies, in his opinion, the mood of Fatah.

"We feel that our choice of strategy, namely peace negotiations, has not been vindicated. The Americans (and specifically US Secretary of State John Kerry) came with good intentions but then became a rubber stamp for Israel's policies. The settlement expansion is not only an expression of Israel's anti-peace policies. On the ground this expansion actually makes the contiguity of a Palestinian state impossible, especially in the Jerusalem area. We must now gain the upper-hand over Hamas in our public opinion — this may come through international diplomatic achievements or through a nonviolent intifada."

He introduced me to some of his Fatah friends. They clearly have a sense that the time has come for them to start taking control of events. They are disillusioned with their own leadership but unanimously blame Israel: "[Prime Minister Benjamin] Netanyahu is intentionally weakening Abbas and strengthening Hamas. Abbas stands for a negotiated solution, Hamas for violent resistance. Who got more out of Israel?"

They speak about settlements in the same manner that Israelis speak about terrorism. When asked what form such an eventual intifada would take, the Fatah source said: "It will be more like the first intifada with mass unrest, demonstrations and confrontation with the army and police in the West Bank and East Jerusalem, but without the use of the Palestinian armed policy, as in the second intifada. The world must understand that we will resist an unending occupation."

He adds that he has not changed his moderate views in favor of peaceful coexistence between the two states, yet he now objects to endless circular negotiations, as have taken place since Netanyahu came to power in 1996.

That a moderate Fatah member — who was active for years in peace-building measures with Israelis — preaches in favor of a third intifada should set off alarm bells in Israel. But, apparently, this is not the case.

The Netanyahu government is still counting on Abbas to prevent an intifada out of self-interest. Indeed, senior sources close to the Palestinian Prime Minister Rami Hamdallah told Al-Monitor that while Abbas will not intervene against the unrest in East Jerusalem, he is opposed to a full-fledged intifada as, in his view, it would derail the ongoing Palestinian diplomatic drive at the United Nations.

Nevertheless, it seems that an intifada is brewing, as most Palestinians have given up any hope of diplomacy. They believe that Economy and Trade Minister Naftali Bennett and the settlers are the driving forces behind Israel's policymaking. The economic situation is dire in the West Bank, with rampant unemployment of the young; East Jerusalem is poor and suffers from lack of infrastructure. The daily humiliation at checkpoints is becoming unbearable and, above all, it seems that time is running out.

The repercussions of such an intifada would be very significant; an intifada will put an end to any foreseeable negotiated solution and it risks deteriorating into a bloody clash between Palestinians and settlers. It will damage Israel's military deterrence, since there is very little the Israel Defense Forces can do to fight such a popular resistance. Another possible repercussion would be considerable economic damage to both sides — tourists will simply stay away. Economic aid to Palestine will be at risk, certainly when it comes to the new US Congress.

A new intifada will probably radicalize the Fatah leadership at the expense of the pragmatic old guard that came from Tunis. It will challenge Hamas and even more radical forces to "compete" with Fatah through terror. It may also endanger Israel's peace treaties with Jordan and Egypt, further increasing Israel's international isolation. Perhaps most significantly, extremism will be on the rise in both Israel and Palestine.

Netanyahu is not looking forward to such a prospect, but he is not ready to take any measures to prevent the deterioration. State Department sources tell Al-Monitor that when US Security envoy Gen. John Allen visited Jerusalem at the end of the war in Gaza on Aug. 25, he again proposed the US security plan for the West Bank — as a basis for future negotiations — to the prime minister, who rejected it out of hand. Other suggestions of a partial settlement freeze, raised by Justice Minister Tzipi Livni at the end of October, were also brushed off. Netanyahu is focused now on his re-election, probably in the 2015 elections, and is reaching out primarily to his right-wing base.

It is hard to say what the level of unrest and violence from Palestinians in the year to come will be. What is clear is that the Palestinian-Israeli equation will be brimming with stone throwing, terrorism, settlement expansion and endless bellicose rhetoric by politicians who thrive on confrontation.

The only solace is that when this chapter one day comes to a close, the two sides and the international community will again look for a political solution to separate the parties into two states. This is the traditional rollercoaster ride of the Middle East, but the slopes are getting steeper and steeper.