Hamas watches its words in response to Jerusalem bus bombing

Hamas is celebrating — but not claiming responsibility for — the April 18 bus bombing in Jerusalem, indicating it is walking a fine political line between maintaining its popularity among frustrated Palestinians and avoiding a punitive retaliation by Israel. 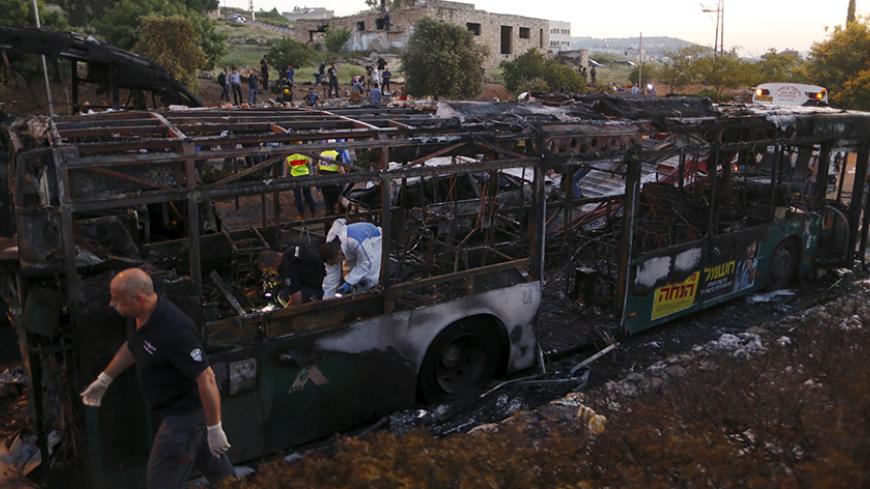 Israeli police forensic experts work at the scene after an explosion tore through a bus in Jerusalem and set a second bus on fire, April 18, 2016.

Since the outbreak of Palestinian unrest in October, attacks on Israelis have been mainly individual and driven by personal motives. Knives have been the main weapons used, with guns appearing only occasionally. This is why the unrest is called "the individual intifada," given the absence of any organizing party.

However, a bus bombing April 18 in Jerusalem that wounded 20 Israelis turned out to be a Palestinian operation carried out by Abdel-Hamid Abu Srour, 19, of Bethlehem. Abu Srour died from his wounds two days later.

Hamas waited until April 21 to issue an official statement mourning Abu Srour, who was a member along with three close relatives — Maher, Mahmoud and Nasr Abu Srour. The relatives were accused in the 1993 death of an Israeli intelligence officer in West Jerusalem during the first intifada. Also, masked men wearing the uniform of Izz ad-Din al-Qassam Brigades, Hamas' armed wing, attended the mourning for Abu Srour and vowed to carry out more operations against Israel. The last time masked men appeared in the West Bank was probably in 2007.

Still, Hamas did not claim responsibility for the bus bombing, raising questions about its reluctance — especially since it staged a rally April 28 celebrating the attack.

Husam Badran, Hamas spokesman and its former military commander in the northern West Bank, told Al-Monitor, "The Jerusalem operation is a natural development that comes in response to the escalating Israeli occupation crimes. These operations are performed based on field developments. Hamas members follow the movement's policy, which consists of resisting the occupation by all means. Groups that carry out such operations do not ask for the group's permission and are not asked to wait for anyone's approval in the movement. Hamas is honored to have its men in the West Bank at the forefront of the confrontation with the occupation."

A couple of hours after the April 18 bombing, Palestinian forces rushed to issue an official statement welcoming the operation. Chief among these forces were Hamas, the Islamic Jihad, the Popular Front for the Liberation of Palestine and the Democratic Front for the Liberation of Palestine. The groups said such an attack was expected, given the Israeli army's ongoing killing of Palestinians and Israeli settlers' storming of Al-Aqsa Mosque. The operation, the statement said, shows that the unrest will continue.

Fatah, which is led by Palestinian President Mahmoud Abbas, did not issue a formal statement, but a spokesman in Jerusalem echoed the other groups' stance April 18. He added, however, that Palestinians are not looking for and do not want violence.

A Palestinian official close to Abbas told Al-Monitor on condition of anonymity, "The Jerusalem operation has taken us back to square one, when the Israeli army invaded the West Bank as part of Operation Defensive Shield at the very beginning of the second intifada in 2002. This is a clear Palestinian setback" that intensifies the Israeli military's scrutiny "at a time when the Palestinian Authority [PA] is making efforts to take out the army from these territories."

"Also, the Jerusalem operation proves our security analyses [that show] Hamas is seeking to establish calm in the Gaza Strip and create tension in the West Bank in a bid to weaken the [rival] PA," he added.

Meanwhile, the Israeli security service Shin Bet arrested a six-member Hamas cell in Bethlehem on April 21 for the Jerusalem attack. The same day, the Israeli army announced the arrest of Ibrahim Haddad from Jerusalem, the owner of two blacksmith shops that allegedly make explosives and roadside bombs.

Hamas still has not claimed responsibility for the operation, prompting Israeli security services to believe that the movement does not want to be dragged into a new war in the Gaza Strip, as happened in June 2014 when the movement kidnapped three Israeli settlers in Hebron. That action prompted Israel to launch a war in Gaza that lasted more than 50 days. However, Hamas is calling for operations against Israel everywhere to revive the unrest, and it sees the Jerusalem operation as an incentive for Palestinians to carry out similar attacks.

Nashat al-Aqtash, a professor of media and political science at Birzeit University in the West Bank, told Al-Monitor, "It is difficult to determine whether or not the Jerusalem operation was individual or organized, in light of the security pressure placed by the PA and Israel on the West Bank, but Hamas is clearly pushing toward such operations against Israel in a bid to revive the intifada."

At the same time, he said, Hamas is trying to avoid repercussions by not claiming responsibility. "Also, there is a high probability that such an operation could be carried out again in the event Israel continues its intransigence toward Palestinians."

It seems that Hamas is making precise calculations in this critical phase with Israel. It probably knows that it ought to weigh the pros and cons carefully before taking any political steps or making media appearances.

Yet Hamas has not disavowed the attack, either; it apparently wants to preserve its popularity among Palestinians, most of whom in the Gaza Strip and the West Bank want the current Palestinian attacks to turn into an armed intifada, according to the latest poll conducted by the Palestinian Center for Policy and Survey Research in March.