How new Israeli settlements will lead to more violence

The United States, European Union and Palestinians have condemned an Israeli plan to build a settlement that could be the tipping point toward more violence and terror. 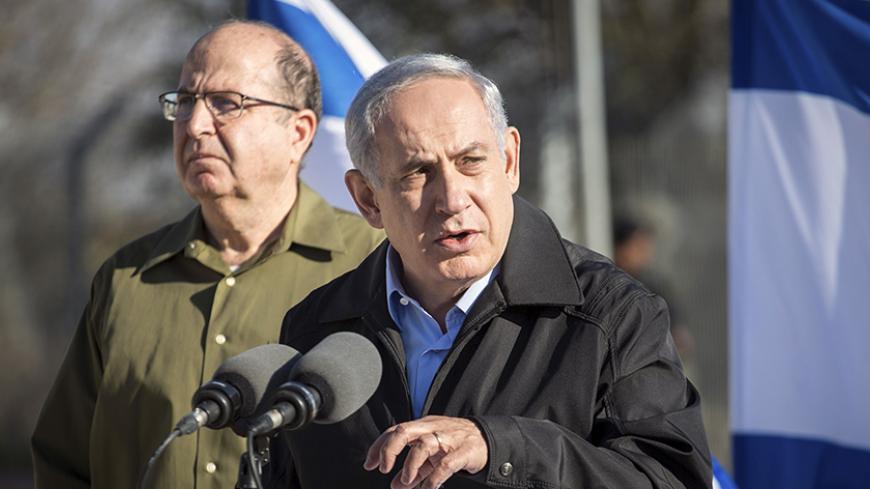 Israel's Prime Minister Benjamin Netanyahu stands with Defense Minister Moshe Ya'alon (L) as he delivers a statement at an army base near the Etzion bloc of Jewish settlements in the West Bank, Nov. 23, 2015. - REUTERS/Emil Salman

Israeli Minister of Defense Moshe Ya'alon has reportedly decided to expand the Etzion settlement bloc in the West Bank to include a compound later intended to become a new settlement. Located between the Etzion bloc and Hebron, the new settlement would create an Israeli corridor stretching from Jerusalem to the city of Hebron. The plan has been severely criticized by the US administration. State Department spokesperson John Kirby condemned the decision, asserting that it hinders attempts to reach a peace agreement between Israel and the Palestinians. “Continued settlement activity and expansion raises honest questions about Israel's long-term intentions,” Kirby said Jan. 8 at a press briefing.

The Palestinian reaction was much sharper. In the view of the Palestinian leadership, the move is aimed at sabotaging the last chance for a two-state solution. A senior Palestinian security official who spoke to Al-Monitor on condition of anonymity angrily stated, “This is Ya'alon's way of thanking the Palestinian Authority's [PA] security cooperation. The minister of defense is well aware of the fact that the PA security forces have averted attacks, mainly by Hamas, against Israelis. President Mahmoud Abbas is taking considerable political risks on the issue. The approval of a new settlement that hinders the establishment of a two-state solution is an affront against all moderates in the Palestinian leadership and might serve as a prescription for enhancing violence.”

The security official also discussed the political situation within the Palestine Liberation Organization and the PA leadership. According to him, the PA has come to a dead end. Prime Minister Benjamin Netanyahu's settlement policies on the one hand and the international preoccupation with Iran and the Islamic State on the other leave no glimmer of hope for a political process on a two-state solution. In parallel, the economic situation in the West Bank has worsened because of Israel’s stringent security measures across the territory. Abbas is perceived as weak, and rumors continue to spread on social networks about his possible resignation. According to a Dec. 14 poll by the Palestinian Center for Policy and Survey Research (PSR), a majority of Palestinians support his departure from office. Inside the leadership, there is a growing camp calling for Abbas to make a drastic move. Only very few, said the official, support Abbas' policy of sustaining the status quo.

The Palestinian official said various Fatah elements are currently considering three options for altering the status quo. One option is to hold new elections for the presidency and parliament so younger and more combative Fatah members can take the lead. Another option is to dismantle the PA to put the entire economic onus for administering the territories on Israel and the political onus on the international community. The other option would be to reach an agreement with Hamas to launch a combined, armed intifada.

With these options in play, the recent move by the Israeli minister of defense has strengthened the hand of the hard-liners in Fatah who favor armed struggle. The senior security official, who has been an active player in the peace process, now supports an armed uprising.

At this point, the Palestinian leadership has yet to decide on a strategy that would lead toward statehood. The Israeli government, however, has settled on its strategy, and Ya'alon’s decision, backed by the prime minister, is strategic in nature. The latter aims at creating, through settlement expansion, two irreversible processes: jeopardizing the territorial contiguity of a potential Palestinian state and increasing the number of settlers. The second process is designed to prevent any future Israeli prime minister from evacuating settlers.

The European reaction to Ya'alon’s announcement was no less critical than the Americans'. A senior EU official in Brussels who spoke to Al-Monitor on condition of anonymity said that she was extremely concerned about the ramifications of the announcement. She said, “It is a clear signal to the Palestinians that the Israeli government will not take into consideration the interests of Abbas, and therefore we foresee a radicalization of Fatah.”

According to the official, the EU is very concerned about the economic situation in the West Bank. It has become increasingly difficult to advance European development projects on the ground because of Israeli security measures and PA dysfunction. Without a political process on the horizon, she foresees chaotic developments.

Indeed, the writing is on the wall. The relatively low-level, sporadic terror attacks by individuals will probably be replaced by more organized armed uprisings. According to the above-mentioned PSR poll, two-thirds of Palestinians support an armed intifada. Is it, however, avoidable?

The Palestinian security official replied to this question by stating, “It’s simple. Instead of announcing every week a new settlement, Israel has to freeze settlement construction and release 40 pre-Oslo prisoners. The next day, we shall come to the negotiation table. More settlements will lead to more terror.”