Is Fatah planning the intifada?

Elements within the Fatah leadership warn that they might take the lead of the violent intifada "to capture international attention" and "to influence Israeli public opinion by demonstrating that occupation has its price." 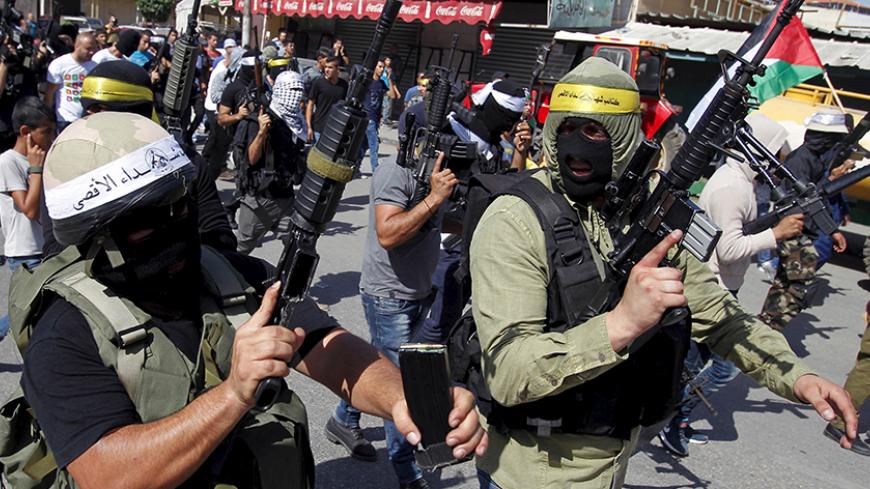 Palestinian militants from the Fatah movement take part in an anti-Israeli military show in the West Bank city of Jenin, Oct. 16, 2015.

There is a sense of despair among all pragmatic political factions in the Palestinian Authority (PA). Even the most moderate elements with good ties to the West have given up on the eventuality of a diplomatic process leading to a two-state solution. This is perceived by public opinion as a defeat for President Mahmoud Abbas and an achievement for Hamas.

A senior Fatah source in Hebron with good ties to the Tanzim (Fatah militia) told Al-Monitor on Dec. 4 on condition of anonymity that a battle has erupted between Fatah and Hamas as to who will lead a violent intifada against Israel. According to his analysis, there is nothing left anymore of the Palestinian national unity. Hamas is inciting the violence of the youth, and Fatah has imprisoned many West Bank Hamas operatives.

The source, who is also close to the imprisoned Marwan Barghouti, a senior Fatah official, told Al-Monitor, “The militants in Fatah are ready to give Abbas one last chance to achieve a Security Council resolution on Palestinian statehood along the 1967 lines with East Jerusalem as its capital and with a relatively short timeline. If that is not achieved, we will opt for a change of strategy. Fatah opposes terror, but will take the lead on a violent uprising. We don't support the current violence of our courageous youth, and our security forces are curbing it, yet the anger and frustration in the West Bank are so widespread that bigger violence will erupt sooner or later.”

“An intifada must be led strategically and have strategic goals,” the source said. “The target must be, first and foremost, to capture international attention to the predicament of the Palestinians and, then, also to influence Israeli public opinion by demonstrating that occupation has its price. The message, therefore, of the intifada, which in some ways has already begun, will be Palestinian independence.”

Indeed, the Palestinian mood in the West Bank has shifted as a result of three events. The first is the opposition of the new Israeli government to a two-state solution. Then there is the issue of the Islamic State “hijacking” global attention. The third event, the most important perhaps, is the continuous expansion of settlement construction, which is about to make the establishment of a Palestinian state virtually impossible.

The Fatah source outlined in broad terms the nature of the eventual future intifada in relation to its goals:

Massive demonstrations against the Israeli army will arise, mainly at checkpoints both inside the West Bank and on the border with Israel, to highlight the occupation. The same thing will happen in the environs of Israeli settlements and on roads that were constructed mainly to serve settlers, to highlight the illegality of the settlements.

In addition, East Jerusalem will become a focal point of this violent intifada in order to highlight its centrality to Palestine and Islam.

The Fatah operative assessed that though much of the Palestinian leadership prefers the option of a nonviolent uprising, a degree of violence is unpreventable and actually preferable in order to attract international public opinion and the attention of governments around the world.

According to the same source, there will be a diplomatic side to this strategically oriented intifada. The diplomatic campaign will focus on recruiting Arab support, international attention and Israeli public opinion. A key target will be Cairo. Egyptian public support for the uprising is of prime importance. The Abdel Fattah al-Sisi regime is also a key element in obtaining Arab League legitimacy for the Palestinian struggle. The core of Palestinian diplomacy efforts will be galvanizing the international community into recognizing the centrality of the Palestinian cause. The Fatah official claimed that an intifada will not succeed unless it can produce diplomatic gains with the United States, the European Union, Russia and China, as well as in the United Nations’ arena.

Regarding Israel, the Palestinians aim to impress upon the more pragmatic parts of the Israeli public that Israel does not get to enjoy a “free ride occupation,” and that the settlement policies will exert a high price for the Israeli economy to pay. In parallel, the PA will turn to the Gulf countries to ask for financial support in case any of the traditional PA donors, such as the US Congress, cut the scope of aid.

It seems that Palestinian policy planning for a violent uprising has advanced and become concretized. How many of these plans will be carved out remains an open question. Nevertheless, having visited Hebron lately, it appears to me that we will soon reach the point of no return.