Predictable Ending Ahead For Israeli-Palestinian Negotiations?

If history is a guide, the Obama administration is unlikely to find success in its latest effort involving renewed Israeli-Palestinian direct negotiations. 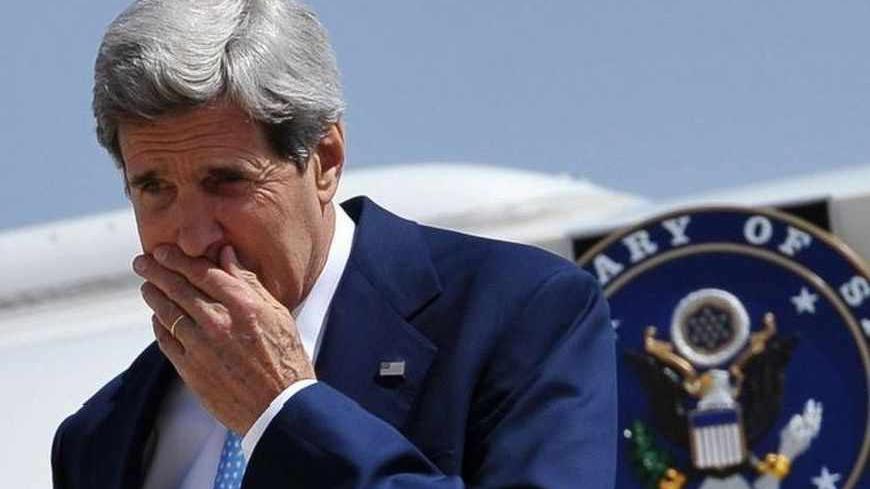 US Secretary of State John Kerry steps off his plane upon arrival at Queen Alia International Airport in Amman, July 16, 2013, during his travels to revive Israeli-Palestinian peace talks. - REUTERS/Mandel Ngan

US Secretary of State John Kerry’s July 19 declaration of renewed negotiations between Israel and the Palestinians is reminiscent of an observation by Albert Einstein: People who are not sane believe one can do the same thing over and over and expect different results.

Direct negotiations have been held 10 times between Israel and the Palestine Liberation Organization (PLO) to reach a permanent settlement on the occupied territories. Ten times the talks ended, at best, with no results, and in a round of violence, at worst. American presidents came and went, Israeli governments fell, and a Palestinian leader passed away. Champagne glasses clinked, cameras clicked, and talks began. Generations changed, terrorists blew themselves up and settlements thrived. No agreement materialized.

To understand the challenge undertaken by the Barack Obama administration, let’s briefly review the history of negotiations on ending the Israeli-Palestinian conflict and the occupation. Is it possible that the 44th president of the United States will succeed in bringing Israeli Prime Minister Benjamin Netanyahu and Palestinian President Mahmoud Abbas (Abu Mazen) to an agreement? Will he manage to navigate the path on which three of his predecessors tripped in their efforts to remove the barriers between the Palestinians and eight Israeli prime ministers? Stay tuned for the answer at the end of this article.

The first agreement relating to a permanent arrangement regarding the territories that Israel captured from Jordan in 1967 was signed at Camp David in 1978 by Prime Minister Menachem Begin and Egyptian President Anwar Sadat under the auspices of US President Jimmy Carter. The agreement stipulated that negotiations on a final status agreement would begin “no later than the third year of the interim five-year (autonomy) period.” Instead of peace talks, we got the 1982 war in Lebanon.

At the Madrid peace conference, convened in 1991 and attended by Israeli Prime Minister Yitzhak Shamir, US President George H.W. Bush announced the start of direct negotiations between Israel and a Jordanian-Palestinian delegation based on UN Security Council Resolution 242, which deals primarily with Israeli withdrawal from territories (or from “the territories”) conquered in 1967.

The next Israeli prime minister, Yitzhak Rabin, traded in the Madrid process for negotiations with the PLO that concluded with the signing of the Oslo Accord in September 1993. This agreement, signed with PLO chairman Yasser Arafat under the auspices of US President Bill Clinton, also stipulated the start of negotiations on a final status agreement no later than the third year of the interim period.

In April 1996, Israeli Prime Minister Shimon Peres and Arafat announced the start of negotiations on a final status agreement. (This detail is missing from the current official biography of President Peres.) The actual negotiations never began, and in fact, they took a long vacation when Benjamin Netanyahu won election as prime minister that same year. At the end of 1998, Netanyahu and Arafat signed the Wye Agreement at Wye Plantation, Maryland, under Clinton’s auspices. Everyone committed to start “immediate and accelerated” discussions on a permanent arrangement with the goal of reaching an agreement by May 1999.

In September 1999, Israeli Prime Minister Ehud Barak, who had replaced Netanyahu that year, signed the Sharm el-Sheikh Memorandum with Arafat in the presence of Egyptian President Hosni Mubarak, Jordan’s King Abdullah and US Secretary of State Madeleine Albright. Once again, the sides committed to renewing negotiations on a permanent status “in an accelerated manner” and to making a determined effort to reach agreement on a framework agreement within five months. The final agreement, including all the final status issues, was supposed to have been signed within one year of the renewal of negotiations.

The negotiations resumed in July 2000, at the Camp David summit, in intense talks between Barak and Arafat with the help of Clinton and his team. In December, Clinton presented the sides with his road map for a final status arrangement. In January 2001, a short time before Barak vacated his seat in favor of Ariel Sharon, a round of direct talks in Taba ended without results.

Two years later, the Quartet —  the European Union, Russia, the United Nations and the United States — led by President George W. Bush presented another road map, which called on all sides to “reach [a] final and comprehensive permanent status agreement that ends the Israeli-Palestinian conflict in 2005,” including “an agreed, just, fair, and realistic solution to the refugee issue, and a negotiated resolution on the status of Jerusalem.” The agreement was to fulfill “the vision of two states, Israel and a sovereign, independent, democratic and viable Palestine, living side-by-side in peace and security.” Instead, Hamas won Palestinian elections, conquered Gaza and the Quartet consoled itself with a unilateral Israeli withdrawal from Gaza in 2005.

In November 2007, President Bush invited Prime Minister Ehud Olmert and Abu Mazen to a summit in Annapolis, Maryland, to declare that the sides would launch immediate negotiations on peace and the establishment of two states for two peoples, to be conducted continuously, aspiring to conclude by the end of 2008. But Olmert ended his political life prematurely, and a resurrected Netanyahu broke off the diplomatic process.

In September 2011, Abu Mazen appealed to the United Nations to promote the two-state solution along the 1967 borders. At the last minute, the Quartet presented the sides with a new blueprint for renewing talks. This time, the sides were to reach agreement no later than the end of 2012. At the beginning of that year, the Israeli prime minister’s representative, Yitzhak Molcho, met with the head of the Palestinian negotiating team in Amman for barren talks on the subject of borders and security.

Ron Pundak, who rocked the cradle of the Oslo Accord, offers lessons from the failure of the process in his spellbinding book, A Secret Channel: Oslo – The Full Story (Yedioth Ahronoth Books, 2013). He contends that the main problem in any agreement stems from its diplomatic goal and the area of its implementation. “Rabin and Peres failed to pick up the gauntlet and did not take advantage of the opportunity to chart a clear goal for everyone,” Pundak wrote. “The lack of a clear diplomatic goal was detrimental to the peace process since the signing of the Oslo Accord.” The same problems persist to this day, on the eve of the renewal of negotiations according to the Kerry blueprint. One need only change the names of the main characters.

The diagnosis regarding Barak is doubly true for Netanyahu. The prime minister refuses to even concede that the West Bank — or Judea and Samaria, as he calls it — is occupied territory, not to mention East Jerusalem and the possibility of land swaps. Kerry spilled buckets of sweat in an effort to bring Netanyahu to the trough. If he is successful in getting him to drink from it, this writer will gladly eat his hat.