Looking back on Oslo, 25 years later

Yossi Beilin, one of the authors of the Oslo Accords, offers seven insights into their achievements and their failures. 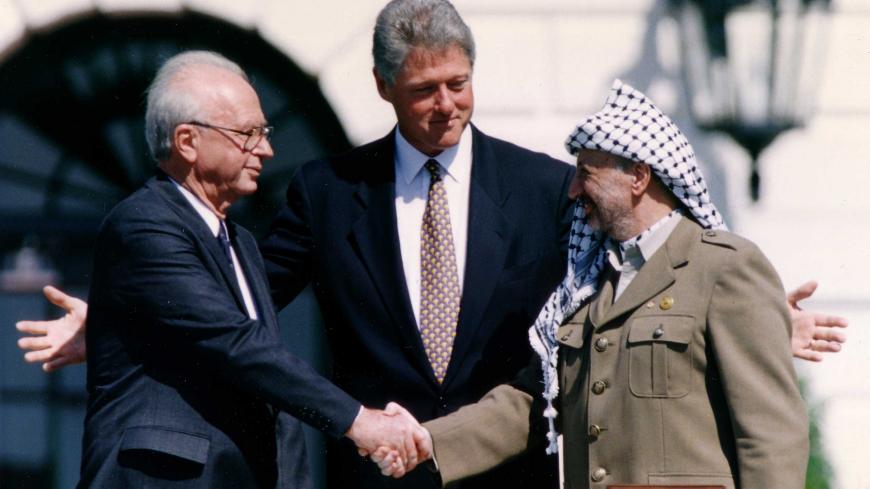 PLO Chairman Yasser Arafat (R) shakes hands with Israeli Prime Minister Yitzhak Rabin (L), as US President Bill Clinton stands between them after signing the Israeli-PLO peace accord at the White House in Washington, DC, Sept. 13, 1993.

Exactly 25 years ago, on a hot day in Washington, the eyes of the world were trained on the White House lawn at a sight that was until then a wild fantasy: PLO leader Yasser Arafat and Israel’s Prime Minister Yitzhak Rabin shaking hands. With the sponsorship of the young leader of the free world, US President Bill Clinton, and their deputies Shimon Peres and Mahmoud Abbas, and they signed a statement of principles meant to bring about a historic peace agreement.

A quarter century later, most of the West Bank territory remains under the direct military control of Israel, the Palestinian cities are governed by a problematic independent administration and the scaffolds — the institutions created for the purposes of an interim agreement that was supposed to end in 1999 — still stand. The temporary has become permanent and the optimism that flourished in the first days after the secret process in Oslo and the agreement that grew out of it were revealed has turned sour. In the estimate of many supporters of the permanent-status solution, it is becoming less and less achievable.

The many articles and documentary films that have been produced to mark the quarter century since that signing ceremony have raised a number of questions, which I’ll attempt to answer here.

Why was there a need for the Oslo channel, if negotiations were already taking place in Washington between an Israeli delegation and a joint delegation of Jordan and Palestinian leaders of the occupied territories (alongside negotiations with Syria, Lebanon and Jordan)?

The Jordanian-Palestinian delegation was artificial and did not succeed in advancing toward an interim arrangement as it was supposed to do according to the mandate of the 1991 Madrid Summit. The Palestinians received instructions directly from the PLO and the Jordanians received instructions from King Hussein, so there was a need to change the paradigm and establish an informal channel.

The Oslo process was born on April 29, 1992, just a few weeks before the election. Terje Rød-Larsen, who ran the Norwegian research institute FAFO, asked to meet with me during a visit to Tel Aviv. I was then a Labor Party Knesset member. He knew about my diplomatic work on the Israeli-Palestinian issue and suggested that after the election, if I am appointed to a role with bearing on diplomatic negotiations, I could use his institute for secret talks to try to resolve the problems that have held up talks in Washington. After our victory in the election, I examined  two other options that were rejected: the United Kingdom and the United States. Oslo was, in my view, the only practical option.

Why were Peres and Rabin not informed about the secret channel?

The hostile relationship between Rabin and Peres is key to understanding Oslo. For years they served together and developed great mutual distrust. When Rabin was elected prime minister in 1992 he preferred not to name Peres foreign minister, but in the end, appointed him on two conditions: Peres would not deal with any bilateral diplomatic process or with Israel-US relations. Peres agreed to these strict conditions, but felt uncomfortable telling me about them.

In September 1992, on the sidelines of the visit of my Norwegian counterpart, Jan Egeland, to Israel, an informal meeting was held to discuss the option of the secret channel. Rød-Larsen, his wife Mona Juul, my friend Yair Hirschfeld and my diplomatic adviser Shlomo Gur participated. The conclusion was that I should inform Peres about the offer of a secret meeting in Oslo between myself and Faisal Husseini, the most important Palestinian leader in the occupied territories who was very involved in the diplomatic process.

On the day I intended to broach the topic with Peres, he told me that he had asked Rabin's permission to meet with Husseini, whom he has known for a long time, but was denied. This was when he first told me of the conditions under which he was appointed foreign minister. It was clear to me that I couldn’t suggest a meeting between myself and Husseini, since I would have to ask Rabin’s permission and Rabin would not have allowed it. I knew that I could ask for such permission only if we could succeed in reaching a draft agreement with the Palestinians.

I asked Hirschfeld to open the channel and to find an alternative to Husseini. The Palestinian figures we talked with said that without direct talks with the PLO, there would be no advancement. It was Hanan Ashrawi who suggested talking with Mahmoud Abbas’ deputy Abu Alaa (Ahmed Qurei), and a meeting took place on Dec. 4, 1992, in London between him and Hirschfeld.

Did the Oslo talks take place in contravention of Israeli law?

No. The Oslo talks began on Jan. 20, 1993, immediately after the Knesset passed a law to cancel the prohibition on contacts with the PLO.

Why did Rabin agree to authorize the continuation of the talks, after all?

Despite his earlier promises not to negotiate with the PLO, Rabin agreed because he did not succeed in advancing the talks in Washington, and he did not fulfill his central campaign promise of reaching an agreement with the Palestinians within six to nine months. As expected, at the moment we presented Peres and Rabin with a paper agreed upon with a Palestinian partner, they found it very hard to reject it.

What was the “Oslo philosophy?”

The Oslo process didn’t have an original philosophy. I intended for the results of the secret talks to be presented as a miraculous, fully resolved understanding to ensure the delegations signed an agreement in Washington. The main importance of Oslo was mutual recognition of the PLO and Israel and the ability to solve several concrete problems that prevented the Washington talks from advancing. But the principal component was the continuation of the idea of a Palestinian five-year autonomy, which emerged from the 1978 Camp David agreement between Israel and Egypt and was affirmed at the Madrid summit.

The philosophy of Oslo wasn’t a belief that through the graduated process, love would break out between the sides and a peace agreement would later be achieved, but rather Rabin’s wish to prove that he is continuing something and is not breaking down existing frameworks.

In my view this was the greatest mistake of the Oslo process. When we understood that we are sitting down with people who truly want to reach an agreement with Israel, we should not have been satisfied with this, because it’s not every day that such an opportunity arises. I believed then that we must immediately continue to negotiations on a permanent-status arrangement and not allow extremists from both sides to thwart the process. Rabin told me that if we go to a permanent arrangement and fail, it would be very difficult to return to discussing an interim agreement.

Why has Oslo not brought peace?

Because of violence that prevented us from having the time to realize the agreement and the trap of an asymmetrical negotiation.

The extreme right in Israel and Islamic groups used violence that we did not foresee to thwart the process and to denigrate it in the eyes of the public. The first murderous event occurred in February 1994, when a religious Jewish doctor from Kiryat Arba settlement, a reserve officer, entered the Hebron Cave of the Patriarchs in his military uniform and massacred 29 Muslims in cold blood and injured many others. The second event was the most dramatic: the assassination of Rabin in 1995 by an extremist Jew who did so explicitly to stop the process. The third was the provocative 2000 visit of then-opposition head Ariel Sharon to the Temple Mount.

After 40 days of mourning the Hebron massacre, Hamas’ suicide attacks began. A day after Sharon’s visit to the Temple Mount, the second intifada began. Arafat was not strong enough to stop it and at a certain stage he too got on board the wave of violence.

When such an asymmetrical negotiation takes place, the stronger party must be careful not to gain too much. We succeeded in convincing the Palestinians not to mention a freeze in settlement construction, but Israel continued to build settlements after the Oslo agreement, and this was the gravest Israeli provocation. Likewise, we got an agreement to extradite Palestinian citizens (and not only Israeli citizens who happened to be in the territories) but in most cases the Palestinians did not carry this out. This made it easy for the right to declare that the Palestinians are violating the agreement.

In 1996, after Rabin’s assassination and Peres’ defeat in the election, Benjamin Netanyahu was elected prime minster. As the opposition leader he promised to nullify the Oslo agreement that was signed only two and a half years earlier, and as prime minister then and now he continues to succeed in turning the interim agreement into a permanent one. Netanyahu understands that the agreement gives him the most expedient conditions to maintain the status quo. Under its auspices he can delay transferring the majority of the West Bank to the Palestinians and pride himself in fulfilling an international agreement.

The fact that the most right-wing government Israel has ever had is holding tight to the Oslo agreement is its greatest failure. That’s what the Palestinians feared from the start, and we erred when we reassured them this won’t happen.

The most important lesson of Oslo is the imperative of seizing a diplomatic opportunity to reach a permanent arrangement like to the Clinton Parameters and the Geneva Initiative, and not to be lured into believing that a diplomatic window that opens will remain so for long.