Prime Minister Benjamin Netanyahu implemented successfully his plan of preserving the Oslo interim agreement, while distancing any possibility for a two-state solution. 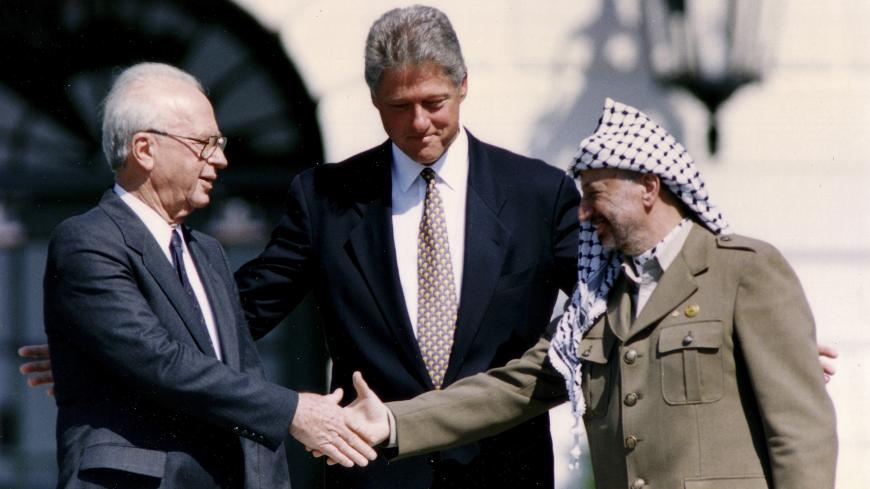 PLO Chairman Yasser Arafat (R) shakes hands with Israeli Prime Minister Yitzhak Rabin (L), as US President Bill Clinton stands between them, after the signing of the Israeli-PLO peace accord, at the White House in Washington, Sept. 13, 1993. - REUTERS/Gary Hershorn

Majed Faraj, head of the Palestinian General Intelligence Service and viewed as a possible successor to President Mahmoud Abbas in a number of Middle East capitals, is now in the midst of intensive negotiations in Washington with his American hosts. On the table is an effort to reboot Trump administration relations with the Palestinian leadership in Ramallah. It was publicized in Israel on Sept. 3 that President Donald Trump asked Abbas to meet with him in New York when Trump will attend the UN General Assembly gathering later this month, but Abbas rejected the offer. The disconnect between Washington and Ramallah blocks all American efforts to jump-start the negotiations and finally unfurl the “deal of the century” that is being crafted by emissaries Jared Kushner and Jason Greenblatt for recalcitrant partners Abbas and Israeli Prime Minister Benjamin Netanyahu.

Parallel efforts were also made in Ramallah. High-level representatives of Egyptian intelligence met with Abbas Sept. 1 for four continuous hours in an effort to reach some type of compromise that would enable renewal of the negotiations. The elderly, unwell Palestinian leader was focused, alert and in good form, but no compromise was reached.

The Egyptian efforts on Saturday continued in the course of the week in Washington. Working vis-a-vis the Palestinian delegation, headed by Faraj, the Americans are trying to consolidate some kind of deal that will enable renewal of the negotiations. According to senior political sources well-versed on the issue, the Palestinians are demanding a total cancelation of the cut in American assistance, in addition to some kind of American act or statement that would offset the transfer of the American Embassy to Jerusalem. They also demand a quiet understanding that east Jerusalem would become the capital of the future Palestinian state, and that the 1967 cease-fire lines would constitute the basis for future negotiation. On top of that, Abbas personally demands the replacement of emissaries Kushner and Greenblatt for “objective emissaries capable of serving as fair brokers.’’

It is extremely doubtful that these conditions will be fulfilled. Meanwhile, it is clear that the unfurling of the “deal of the century” has been postponed, and we can only hope and pray that it is not being postponed to the next century. All this is taking place on the 25th anniversary of the 1993 Oslo Accord, an agreement that put an end to the condition of war that prevailed between Israel and the PLO and led to mutual recognition of the sides for each other. But for the last decade, the (interim) agreement has been dormant and fossilized. No Palestinian state has yet been established, a permanent-status arrangement (which should have followed the interim agreement) is as out-of-reach as ever, and the disconnection between Jerusalem and Ramallah is absolute despite the fact that the two cities are only a 20-minute drive apart. Yet despite all this, Oslo is not dead and it is too early to eulogize it. On the contrary: It is still alive and kicking at this very moment.

Over the last decade, “Oslo” became a kind of curse word in the Israeli public. The vast majority of Israelis believe that Oslo has failed. The Israeli political right has attacked this agreement furiously since the day it was born, and the “loathsome” accord is perceived as a rusty, hopeless castoff in the junkyard of history. In face of all this, we must ask: If the agreement is so terrible, why hasn’t Israel revoked or abolished it? Why does the present right-wing government (established in 2015), the most right-wing government in the annals of the state of Israel, continue to fulfill the Oslo agreement verbatim? Many senior Israeli personages have declared, “The two-state solution is dead” —​ former Minister Gideon Sa’ar was the most recent of these — yet the government has not voted to cancel the agreement. Why? It would be a lot easier to accomplish than the whole government-initiated process that led up to acceptance of the controversial Nationality Law, yet it’s not happening.

The answer is clear: The Oslo Accord’s success in stabilizing the reality on the ground is in fact the biggest failure of all. When Netanyahu was first elected to the premiership in 1996, he did not cancel the agreement; he signed it. He transferred Hebron — the “City of our Forefathers” — to the Palestinians (the 1997 Hebron Protocol); he went to the Wye Plantation and signed on the dotted line to transfer another 13% of the West Bank as part of the “second stage” of the agreement (the 1998 Wye River Memorandum). Before he carried out his promise, Netanyahu lost the 1999 elections to Ehud Barak. When Netanyahu returned to power 10 years later, he found a much more difficult reality on the ground: The settlers had doubled and tripled themselves, despite the agreements. At this stage, Netanyahu implemented his original, secret plan: not to cancel Oslo, but to freeze it in its early stages.

And that is exactly what happened: Oslo ground to a halt after the first stage was implemented but before the second. This can be compared to bringing a child into the world but halting his development at age 5. No Palestinian state arose; the sides lost confidence in each other; and the second, bloodstained Intifada (2000-2005) destroyed whatever remained of hope and of the Israeli peace camp. Thus, the reality on the ground constitutes a perfect status quo as far as Netanyahu is concerned: On the one hand, most of the Palestinians live in Area A, under direct Palestinian control. On the other hand, no Palestinian state has risen; sovereign Israel is all around the Palestinian territories; and the Israel Defense Forces are stationed on the Jordan River, Israel’s eastern border.

And so the situation remains as it is: stuck. The Oslo Accord was implemented successfully regarding a preliminary separation between the Palestinians and the Israelis. But before it matured into a permanent-status arrangement, namely a peace agreement for a two-state solution, it ground to a halt and went into a coma. With regards to Netanyahu, this coma could last forever. With regards to Abbas, he also seems to favor the status quo.

The Oslo concept was good, but its execution was bad. Two and a half decades of distrust, confrontations and terror attacks created a reality in which the leaderships of both sides are unable to talk to one another; they even do not believe that it is possible to square the circle and reach a permanent-status agreement.

On the other hand, many seniors in the Israeli security system — which diligently maintains security cooperation with the Palestinian security apparatus — feel that the principles behind a future permanent agreement with the Palestinians are clear to everyone and are within reach. A very senior member of the security system recently told Al-Monitor on condition of anonymity, “Give me Abbas for a few hours and I’ll get him to sign a permanent-status agreement. The parameters are well-known; they’ve been chewed over and over-discussed for generations. What is needed is real willingness and courage.”

“Willingness and courage” are nowhere to be found. The last person who was equipped with these characteristics was shot three times in his back on that night in the square in November 1995. Former Prime Minister Yitzhak Rabin died, and Oslo was buried alive but somehow — despite it all— continues to live on to this very day.