Sharon's legacy: Only death is irreversible

The late Prime Minister Ariel Sharon's legacy, including the disengagement from Gaza, was designed to hinder an agreement with the Palestinians in the West Bank. 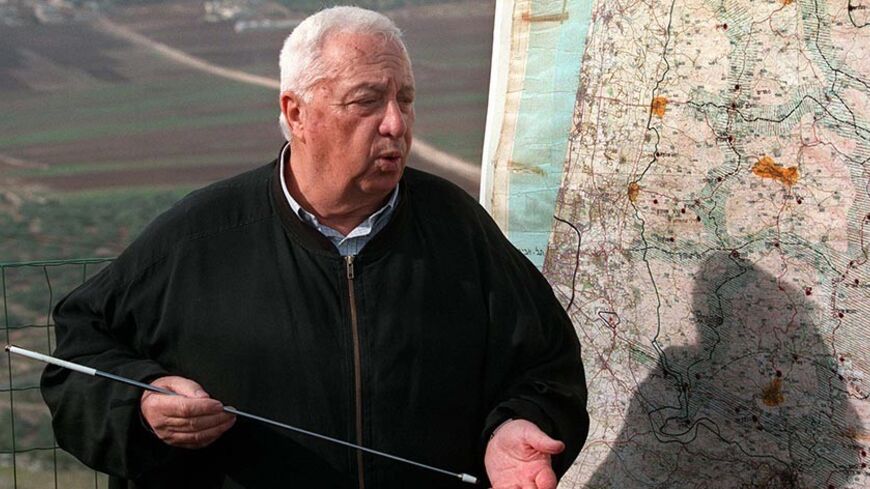 Ariel Sharon maps out his vision of an Israeli security zone stretching deep into the West Bank on land Palestinians see as part of a future state, Dec. 5, 1997. - REUTERS

It was in the spring of 1992, a number of months after the Madrid Conference, which began the peace process, and before the elections to the Knesset that ended 15 years of Likud Party rule. Ariel Sharon, then the minister of housing in the Shamir government, invited me to tour the Samaria region. From the heights of one of the hills near the Alfei Menashe settlement, he pointed to innumerable, randomly scattered clusters of red roofs, and many gleaming asphalt roads crisscrossing the landscape.

“You’re probably asking yourself, what’s the point of scattering small settlements on every hilltop, instead of concentrating all of them in one settlement?” Sharon thundered in his unique voice and explained, “This dispersion is intended to prevent any government established in Israel from returning to the borders of the Green Line and enabling the creation of a Palestinian state.”

Twenty-two years later, cabinet members who passed before Prime Minister Ariel Sharon’s coffin, knew that not too long from now they will have to choose between the creation of a Palestinian state, with a western border based on the Green Line, and a diplomatic-security crisis and the risk of an economic boycott. The motto “Another goat and another dunam” that Sharon inherited from the leaders of the mother party of Israel's Labor Party, Mapai, who founded the state, has ended its role. The 1977 plan, “A million Jews in Judea and Samaria,” which was meant to thwart the plan to divide the land, has passed from the world.

Despite the generous aid that Sharon and his heirs have offered, and still offer, the settlers, less than 400,000 Jews, 5% of Israel’s population, have chosen to settle in the West Bank. Two-thirds of them are crowded in areas abutting the Green Line. The vast dispersion of isolated settlements all over the West Bank has not swayed the international community to abandon its insistence on the 1967 borders and on territorial exchange as a key to a diplomatic agreement. There is no phenomenon that causes more damage to Israel’s status in the world like the settlement enterprise.

As defense minister in Begin’s government (1981-83), Sharon's goal was to destroy once and for all the idea of dividing the land and perpetuate the vision of Greater Israel. On this issue, too, he achieved the opposite of his intentions. The pursuit of the leadership of the PLO, and Palestinian Authoriy Chairman Yasser Arafat specifically, into Beirut, in the Lebanon War (1982), which was meant to create a “new order” in Lebanon and push out the PLO, embroiled the Israel Defense Forces (IDF) in a bloody war and strengthened the Shiite, pro-Iranian forces in Lebanon.

More so, the loss of control in Lebanon was the main incentive for Arafat and his exiled friends in Tunisia to recognize Israel within the 1967 borders in 1988, on the basis of UN Resolution 242. From there, the road was already paved for international recognition of the PLO, the convening of the Madrid Conference, the return of the Israeli Labor Party to power, led by the late Prime Minister Yitzhak Rabin, and to the Oslo Accord.

From his seat in the opposition, Sharon acted as a vocal trumpet for the extreme right, which did not shrink from incitement against Rabin. In an interview with the Kfar Habad ultra-Orthodox journal in 1995, extensively quoted in the daily press, Sharon claimed that Rabin had gone mad. After a short period of calm in the foreign minister’s office in the first Netanyahu government (1996-99), Sharon made his way to the prime minister's office, upon the ruins of the Oslo process.

His provocative ascent to the Temple Mount in September 2000, at the height of the efforts to revive the failing negotiations at Camp David, gave the signal for the outbreak of the second intifada. The journalist Uri Dan, who was Sharon’s good friend, later recounted, “Arik would call me and ask, do I think there’s a connection between his ascent to the Temple Mount and him becoming prime minister? I answered him in the same way that he asked, 'And what do you think, Arik, is there a connection?' There was silence on the other end of the line.”

The series of suicide bombings, whose peak was the murder of 30 Israelis gathered for a Passover traditional meal at the Park Hotel in Netanya, was the grounds for Prime Minister Sharon’s decision, in March 2002, to launch Operation Defensive Shield. While the IDF assault on the cities of the West Bank fatally damaged terrorist elements, it also heavily damaged the physical and political infrastructure of the Palestinian Authority.

Moreover, in his book, A Look at the Resistance from Within, Mohammed Arman, a member of the Izz ad-Din al-Qassam Brigades, who is sentenced to 36 life sentences for the murder of more than 40 Israelis, tells how Sharon played into Hamas’ hands. The arch-terrorist revealed that all Hamas units received directions from above to thwart the Arab peace initiative on the eve of its anticipated approval at the Arab League summit in Beirut. The initiative was approved on March 28; the bombing in Netanya took place on March 29. On March 29, Sharon announced Operation Defensive Shield. The din of battle in Jenin and Ramallah drowned out the regional voice of peace from Riyadh to the Maghreb.

A few months before Sharon directed the IDF to surround the Muqata and isolate Arafat from the outside world, the former head of the Mossad, Shabtai Shavit, who was one of Sharon’s advisers, said in an interview with the Israeli daily Yedioth Aharanoth (Dec. 7, 2001) that if Israel could get rid of Arafat, “No one could step into his shoes to open doors among world leaders, and the Palestinian question will fall from the international agenda.” In the same interview Shavit also argued that [Palestinian Authority Chairman] Abu Mazen (Mahmoud Abbas) is “a member of the Bahai faith,” and therefore his appointment as Arafat’s heir “is like appointing a Samaritan as president of the State of Israel.”

Abu Mazen, as we know, was appointed prime minister, a fact that did not prevent Sharon from calling him “a chick who hasn’t sprouted feathers” in a government meeting. When it became clear that despite his efforts to ground Abu Mazen, the two-state solution wasn’t disappearing from the world’s agenda, Sharon formulated the plan for disengagement from the Gaza Strip. The problem was that the disengagement, which was not coordinated with Abu Mazen, led to the Hamas takeover of the Gaza Strip. Nevertheless, the diplomatic process was launched again.

The followers of the “new Sharon,” who claim that the evacuation of the settlements of Gush Katif testifies to Sharon’s reversal in his final political days, are urged to read the interview/confession Sharon’s right-hand man, Dov Weissglass, gave the Israeli daily Haaretz in October 2004.

Here are some enlightening quotations: “The disengagement is actually formaldehyde in which you put the president’s [George W. Bush’s] plan, so that it can be kept for a very long time. It supplied the necessary amount of formaldehyde so that there wouldn’t be a diplomatic process with the Palestinians. … Arik [Ariel Sharon] does not see Gaza as an area of national interest today. He does see Judea and Samaria as a region of national interest. He justifiably thinks that we are still very, very far from the time where we could reach final arrangements in Judea and Samaria.

“What I basically agreed with the Americans was that we don’t deal at all with some of the settlements, and with other settlements we won’t deal until the Palestinians turn into Finns. … Basically, this whole package called the Palestinian state, with all it entails, has been removed from our agenda for an unlimited time. And all this is officially authorized. All this is with a presidential blessing and the approval of the two houses of Congress.

“There was a very difficult package of commitments that they expected Israel to accept. They called this package the diplomatic process. It included components that we could never accept and components that we can’t accept today. But now we have succeeded in taking this package and pushing it past the mountains of time. With the right management, we’ve succeeded in removing the issue of the diplomatic process from the agenda. And we have educated the world that there’s no one to talk to.”

There’s something symbolic, perhaps historical poetic justice, in that the man who dedicated his life to creating an irreversible reality in the occupied territories has passed away just as the diplomatic and political reality at the beginning of 2014 reminds us that only death is irreversible.