Palestinians warn that President Mahmoud Abbas might decide at the beginning of 2018 to dismantle the Palestinian Authority and cancel the Oslo Accord. 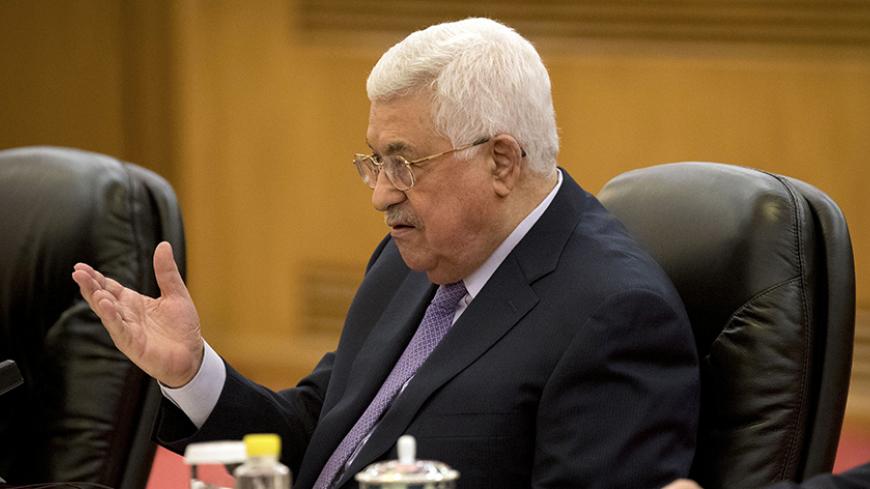 Palestinian President Mahmoud Abbas speaks during a meeting with Chinese President Xi Jinping, not shown, at the Great Hall of the People in Beijing, China, July 18, 2017. - REUTERS/Mark Schiefelbein

The Temple Mount crisis and violence has left the Palestinian leadership in Ramallah extremely frustrated. While the goal to restore the status quo on the Temple Mount/Haram al-Sharif was achieved and the Israeli government indeed dismantled all security measures July 25 at the entrances to the Temple Mount, the credit for this in the Palestinian public opinion went to the radicals. The Palestinians feel that Hamas and the northern branch of the Islamic Movement in Israel, not President Mahmoud Abbas or King Abdullah of Jordan, are the ones who forced Israel to capitulate.

A senior Palestinian minister, an official with an extensive security background who is close to Abbas, told Al-Monitor on condition of anonymity that the Fatah leadership is currently extremely concerned over the nature of the Palestinian struggle in the eyes of the Palestinians and the Arab and Muslim world. The leadership fears that Israeli Prime Minister Benjamin Netanyahu’s security measures near Al-Aqsa Mosque added a religious layer to the national conflict.

The senior Palestinian official said, “The Israelis do not understand the enormous dangers involved in a religious war. It would bring Hamas, Hezbollah and Iran to the forefront of the armed struggle and endanger the pragmatic elements in the Palestinian leadership. If Israel contrives to make Al-Aqsa a cause celebre, it is doomed to confront later on Islamic fundamentalist neighbors that will not shy away from any military, terrorist or popular violence.”

The official warned that turning the Palestinian struggle into a religious one in nature would create an existential threat to the secular majority in the Palestinian leadership. “The day will come that you will miss [PLO leader] Yasser Arafat and Mahmoud Abbas — especially if Israel’s government continues to be led by messianic settlers,” he added. He defined Netanyahu’s current policies as pyromania.

The official noted that given recent events, the diplomatic window of opportunity regarding any possible initiative by US President Donald Trump and his team may close in the months after the UN General Assembly meeting in September. Given the current crises and the painfully slow process led by Trump’s envoys, he said, the Palestinian leadership has begun to question its own future.

According to the official, Abbas has altered his rhetoric in internal leadership deliberations and is threatening, in the case of diplomatic failure and greater violence, to resign at the end of the year and dismantle the Palestinian Authority (PA). Abbas’ mood is more militant nowadays. The official recounted that Abbas was disappointed with the lack of Arab support during the Temple Mount crisis, and he found the US intervention through envoys Jared Kushner and Jason Greenblatt very lacking. Even during this crisis, Abbas was ready to call for the first time in many years on the military wing of Fatah, the Tanzim, to get involved in the protection of Al-Aqsa and its worshippers.

The official added, “We were closer to an outburst of an intifada than Israel acknowledges.”

What concerns the Palestinian leadership most is the split between the more religious and fundamentalist forces in the West Bank and Gaza Strip and the more secular ones led by Fatah. Therefore, Abbas has decided to espouse a very nationalistic line, attempting to overshadow the religious one.

The official claimed that Abbas still objects to violence, as he always has, and that for him the last resort is the dismantling of the PA, placing the onus of the total diplomatic stalemate on Israel and the Arab League. The official said, “Abbas has a clear vision of how this could take place. In his eyes, dismantling the PA would constitute a shock therapy to encourage the international community to act on a two-state solution.”

If Abbas pursues the idea of dismantling the PA, he could make a series of announcements at the beginning of 2018. These could include the dismantling of the PA, the abolition of the Oslo Accord, the end of any security coordination with Israel, the temporary relocation of the Fatah leadership to Cairo and the distancing of the PLO from the 2002 Arab Peace Initiative.

The official warned about dismissing such a possibility and said that the status quo must change — for better or worse.

A senior Israeli Foreign Ministry official told Al-Monitor that Israel senses the weakness of Abbas, 82, and that his health might be frail. The Israeli source argued that the security establishment in the PA would not allow Abbas such a move, as it wants to keep the clout of Fatah as strong as possible in its struggle against Hamas. Still, the source acknowledged that given the relative passivity of the international community, including that of the United States, which Israel welcomes, a crisis with the PA is looming. Such a crisis, he said, might occur sooner than Israel expects.