Will struggle over Jerusalem transform into regional religious war?

Israel, the Palestinians and the United States underestimate the emotional impact of the struggle over Jerusalem on Arab public opinion, thus leaving the gate open for it to escalate to a wide-scale conflict. 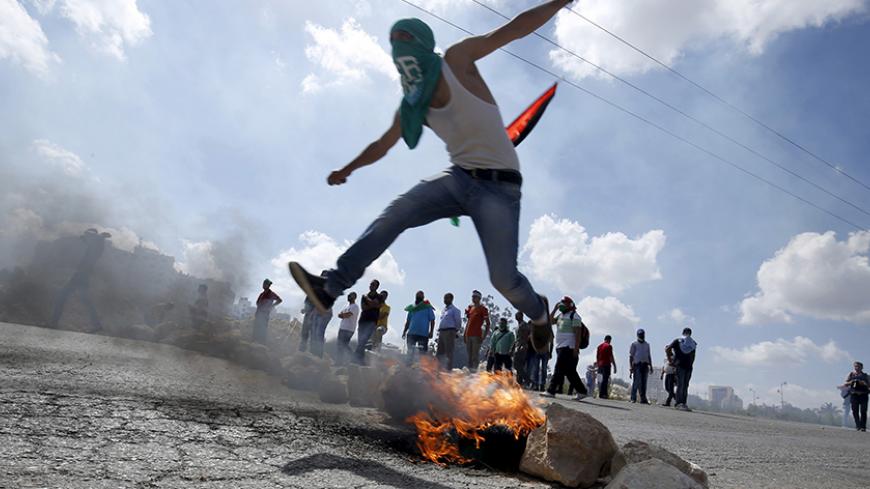 A Palestinian protester jumps over a burning tire during clashes with Israeli troops over tension in Jerusalem's Al-Aqsa Mosque, near the occupied West Bank city of Ramallah, Sept. 29, 2015. - REUTERS/Mohamad Torokman

Doomsday scenarios rarely play out the way they are predicted. Yet, not much imagination is needed to envision what could happen in the Middle East these days if a hand grenade were to be thrown at praying Muslims at Al-Aqsa Mosque or Jews at the Wailing Wall. At a time when religious fanatics on all sides seem to have the upper hand and appeal to large masses, the regional conflict is increasingly dominated by organizations such as the Islamic State (IS), al-Qaeda, Hezbollah, Hamas, and so on. Also in Israel, religious zealots have discovered how easy it would be to set the region on fire. And so, a Middle Eastern "September 11" is not out of the question.

A senior security official in Ramallah told Al-Monitor of his concern that the current confrontations surrounding the Al-Aqsa Mosque could inflame the whole region. He accuses Israel for taking unilateral measures that change the status quo on the Temple Mount and is worried of Hamas exploiting the situation in favor of a jihadi confrontation with Israel, headed by the movement. He also voiced concern about IS captivating the imagination and the support of young Palestinians, especially in the Gaza Strip; thus inciting them to follow its lead into a religious war.

A combined attack from the north, south and east on Israel by Hamas, Hezbollah and IS (IS operating both in the north — the Golan Heights — and the south — the Sinai Peninsula) would set off a prolonged violent and unprecedented confrontation. Such an eventuality is feared and contemplated by all relatively secular regional leaders, yet little is done to prevent the Middle Eastern conflict from turning into a Jewish-Muslim one.

For the US administration, curbing Islamic fundamentalist terror organizations is of highest priority, mainly in Syria, Iraq and Yemen. As to the Israeli-Palestinian context, concerns about the Jerusalem issue have been raised in Secretary of State John Kerry’s contacts with Prime Minister Benjamin Netanyahu and President Mahmoud Abbas. Yet, the US policy only entails calling on the parties to exercise restraint.

As to the Palestinian leadership in Ramallah, Abbas is using his security forces to avoid a major outbreak of violence. He is warning Israeli and international interlocutors of the outbreak of a third intifada and of the end of his security cooperation with Israel.

There is also no doubt that Netanyahu is interested in preventing the deterioration of the situation into a religious confrontation over Jerusalem. He believes that the stringent measures the Israeli Cabinet adopted against Palestinian youth stone throwers, such as a 2- to 4-year minimum prison sentences, will contain the situation.

The current situation and imminent dangers call for full coordination between Israel, the Palestinian Authority (PA) and the United States; yet there is no willingness for such cooperation on any of the sides, as this would necessitate the renewal of peace negotiations on a permanent status solution. All three sides’ current measures in relation to the Jerusalem situation are insufficient and resemble a bandage for a cancer patient.

The US administration is dealing today more with the symptoms of the unrest in Jerusalem than with its root causes — the stalemate in the political process, which plays into the hands of the fundamentalists.

The PA finds itself between a rock and a hard place. It has to support the rebelling Palestinian youth in Jerusalem, yet it wants to prevent a major outbreak of violence or an intifada. Thus, its policies are marred with ambiguities.

As to Netanyahu, he, as usual, sees the Jerusalem confrontations with the stone-throwing Palestinian youth through the lens of the gun. The Israeli Cabinet's fairly draconian new measures, including the possible use of live bullets against stone throwers, speak volumes as to a fundamental Israeli misunderstanding of the situation. Clearly, Palestinian youth attacking Israeli soldiers and citizens have not been deterred in past years by Israeli measures, as they believe that they have everything to gain from being the underdog in this struggle. Influenced also by Palestinian mass media, they also believe they are fighting for a holy cause.

Worse still for Israel is that the international community has switched the roles of David and Goliath in the Middle East, with Israel now playing the role of Goliath; a very bad image considering that Goliath was bigger and that he lost.

A common and serious flaw of the three parties’ policies is that in the struggle against Islamic fundamentalists, they underestimate the emotional impact of the struggle over Jerusalem on Arab public opinion. While it is true that the leaderships of IS, al-Qaeda, Hezbollah, etc., don’t care much about their Palestinian brethren's fate, they also use the unresolved conflict, the occupation and the Jerusalem tension in order to recruit the Arab and Palestinian masses.

Therefore, it is of great urgency to deal with the political aspects of the current crisis by launching a peace process in favor of a viable Palestinian state, security for Israel and a political resolution for Jerusalem as one city and two capitals, with each side responsible for its holy sites.

Anything short of that may end up with a violent deterioration into a third intifada with strong religious undertones and the involvement of Islamic fundamentalist terror organizations.