Israeli Prime Minister Benjamin Netanyahu and Palestinian President Mahmoud Abbas must each separate himself from the religious parties near him, or else the conflict will escalate into unprecedented levels. 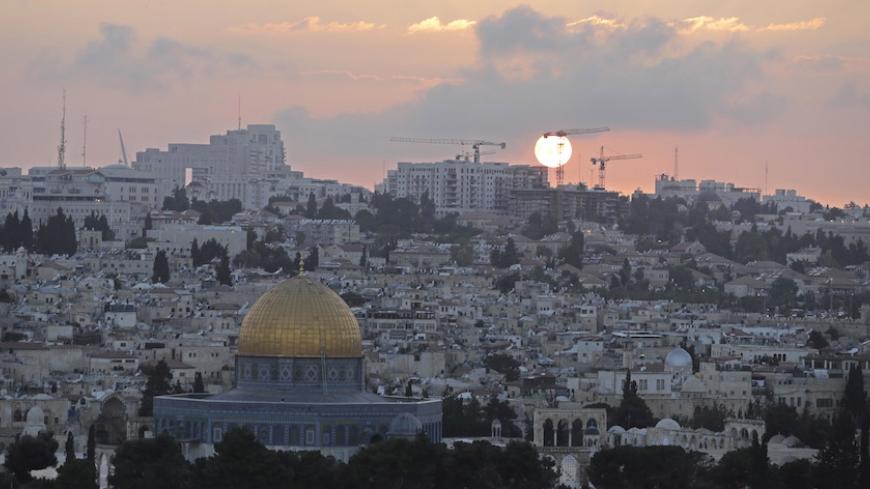 The Dome of the Rock (L) located on the compound known to Muslims as Noble Sanctuary and to Jews as Temple Mount in Jerusalem’s Old City is seen during sunset, May 29, 2015. - REUTERS/Ammar Awad

The current violent conflict between Palestinians and Israelis makes one reminisce about better days — when Prime Minister Yitzhak Rabin, Foreign Minister Shimon Peres and PLO leader Yasser Arafat were working together for a peaceful solution.

A senior PLO official, who was one of a very small number of Palestinians who negotiated directly with Rabin and Peres, told Al-Monitor, on condition of anonymity, that he remembers well his attendance at Rabin's funeral on Nov. 6, 1995: "We felt a common sadness, we knew that this was more than a personal tragedy, it was a loss for peace." He added with great concern, "We hardly agreed with Rabin on any issue. His concept of security infringed on our right to freedom. Yet we respected him and his strategic intention to achieve a peaceful two-state solution. At this time, no matter what the differences in view between him and Yasser Arafat were, the conflict was of national nature — two national movements struggling over self-determination on the same land — and so was the potential solution, which aimed at sharing the land between two states. Since then, we had to deal with five Israeli prime ministers and 10 years of a Netanyahu government. The process has been kidnapped by religious zealots, mainly Israeli settlers, who are playing into the hands of fundamentalist Hamas; thus, we must face a conflict that is turning religious and is leading to major violence."

The senior official, who still has an important say in Ramallah today, is right.

In Israel, the traditionally secular governments dating back to independence have now been replaced with a government that — while led by a mostly secular party, the Likud — is dependent on and driven by a religious powerhouse — the HaBayit HaYehudi party of Naftali Bennett — and a constituency of almost half a million settlers.

In Palestine, the flaws in Fatah's nation-building efforts, and even more so the failure of the various peace efforts, have brought Hamas to power in Gaza, with an important say in the West Bank as well.

This tendency is exacerbated by the weakness of the secular leaderships.

In Palestine, President Mahmoud Abbas has very little love lost for Hamas, but feels compelled to unite with it given the lack of a viable diplomatic track leading to independence.

In Israel, Prime Minister Benjamin Netanyahu won the last March 17 elections due to the great number of traditional HaBayit HaYehudi voters and many of the settlers, who, at the last minute, saved the prime minister from defeat. Netanyahu knows that his leadership base and his sustainability depend on the national religious party and voters, as well as the settlers.

These political realities in Palestine and Israel rule out a rational solution to the current crisis, and the Israeli-Palestinian conflict is on its way to turning into a religious one.

This makes the current crisis a very dramatic one. It is not about the level of violence or casualties or about current policy measures of the two parties in crisis management. This is about a possible major watershed in the history of the Israeli-Palestinian conflict and of the Middle East conflict all together.

If the religious factions become the main forces that drive the conflict, the eventual ramifications will be considerable. The focal point of such a conflict will be Jerusalem and the holy sites, raising the passions and flames of the conflict to uncontrollable levels. Too many people are ready to die and kill in the name of God. We risk witnessing outbreaks of violence of unprecedented nature.

Religious antagonisms are intoxicating, and the level of mutual hatred and racism will be difficult to control.

Such a conflict would bring new players into the field, especially fundamentalist terror movements such as al-Qaeda, the Islamic State and various other jihadi movements. In Israel, the security services are gravely concerned by the desire of extremist Jewish religious zealots like the "Price Tag" movement to set the region on fire. A religious conflict would ignite the broader Islamic world with its 1.4 billion people to support its Muslim brethren in the West Bank and Gaza Strip. The religious clash could spread internationally, bringing about Jewish-Muslim confrontations in France, for instance, and the deterioration of relationships between the West and the Muslim world. We are not there yet, but a new trend has taken off in this dangerous direction.

It is up to Israel and Palestine to make an immediate turnabout in policies and divorce the alliance with religious parties. In Israel, it's about Likud replacing Bennett's HaBayit HaYehudi party with the Zionist Camp and freezing the expansion of settlements. In Palestine, Abbas must abandon the alliance with fundamentalist Hamas and reject its terror.

This should happen now, before it is too late.