Instead of contemplating a passive approach, the United States could declare 2018 the year of permanent status for the two-state solution, establishing an independent Palestinian state alongside a secure Israel. 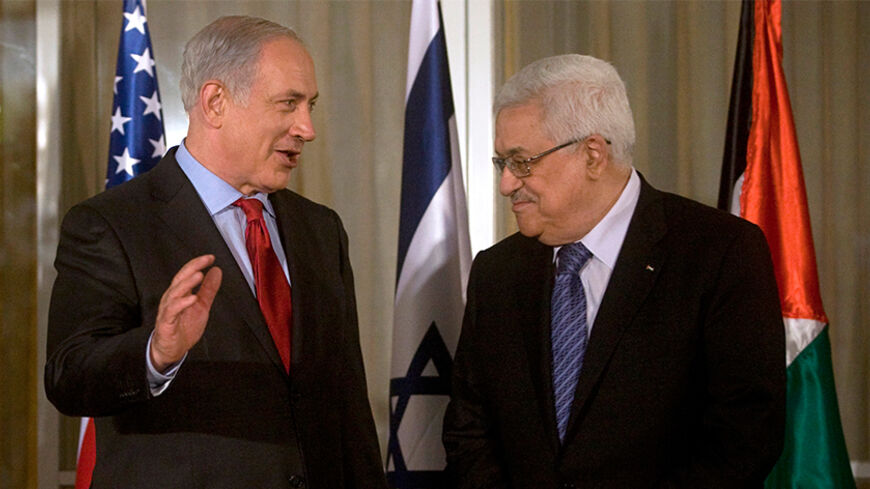 The recent violence in and from the West Bank has made many American diplomats nervous about a bigger breakdown of Middle Eastern stability. Arab media outlets and social networks buzzing about Palestinian casualties and an Israeli affront on Al-Aqsa are a sure recipe for regional turmoil.

Middle East policy analysts from the US State Department have told Al-Monitor that several policy options are being weighed to restore stability and, more importantly, to set a basis for an eventual peace process. These analysts are unanimous in their diagnosis of the dangers facing the region. They qualify the sporadic daily terror attacks against Israel as an outbreak of anger provoked by the ongoing humiliation that results from military occupation of large parts of the West Bank. The inspiration for attacks and the daily knifings come from social network posts and pictures glorifying youth resistance. Hamas, in the view of these analysts, is encouraging the violence and attempting to instigate an intifada, mainly to weaken President Mahmoud Abbas' position in the West Bank. He is branded by them — and also by some Fatah nationalists — as a traitor for his security cooperation with Israel at this time. The fact that this violence has taken on religious undertones with the motto of rescuing Al-Aqsa in the name of Islam raises additional concerns in Washington — that the crisis could grow and transform into a broader regional confrontation, with other Islamist and fundamentalist organizations joining in.

And yet, according to these analysts, the policy measures currently being considered are for the most part of a tactical nature, given the unwillingness of Prime Minister Benjamin Netanyahu to enter serious two-state solution negotiations, as well as Abbas' political weakness.

A senior diplomatic State Department source told Al-Monitor on condition of anonymity that the administration is contemplating two possible sets of measures.

The first set includes practical ones, including mutual confidence-building measures, such as Israeli concessions on Palestinian economic activities in Area C, the de facto freeze of settlement expansion and greater freedom of movement inside the West Bank, in return for the Palestinians refraining from unilateral moves at UN institutions, including at the International Criminal Court.

The second path of a possible US initiative could be a more declarative one, by making public the elements of the framework agreement proposed by Kerry in spring 2014, possibly through a presidential speech.

The administration estimates that at best, these measures may be helpful in achieving stability and preventing an intifada, but will not suffice to renew a viable peace process.

According to the senior State Department source, the Palestinian Authority has indicated to the United States that tactical measures and declarations fall short of their expectations and will not strengthen Abbas' moderate camp.

A senior Palestinian security source told Al-Monitor on condition of anonymity that time is running out for the Palestinian leadership's ability to curb terror and violence: "At a time when daily violence by settlers and the army against Palestinian youth takes place, security cooperation with Israel is viewed as surrendering," he said, warning of a major outbreak of violence and terror — sporadic or incited — by Hamas. When asked about any possible US policy measures, the security official unequivocally criticized the Barack Obama administration: "We were told to wait until after the Iran deal was approved by Congress. Now Syria is at the focus of their regional policy. The administration is again leaning 100% in favor of Israel, and does not comprehend the centrality of the Palestinian cause to the Arab world."

Similarly, Jerusalem does not express much enthusiasm about the American ideas. That was made clear by Netanyahu when he met with Obama on Nov. 9 at the White House. Netanyahu agrees to an immediate and unconditional resumption of Israeli-Palestinian negotiations and to minor tactical confidence-building measures. He rejects, though, any attempts to discuss the US framework proposals and any real and official settlement freeze.

One may understand American reluctance to diplomatically engage in a prominent way without any readiness by the two parties to make significant compromises. Yet, given the dangers entailed in a continuous diplomatic stalemate, the US administration would be better advised to take more strategically-oriented policy measures that pertain to progress on a permanent status agreement and Palestinian statehood. Abbas needs a timeline for statehood to justify his moderate approach. Such an initiative by the United States could be based on the timeline detailed in the Oslo agreement, i.e., three years of negotiations to achieve permanent status. The United States could declare 2018 the year of permanent status for a two-state solution, establishing an independent, demilitarized Palestinian state through basic, acceptable terms of reference, such as the US framework proposals, the 2002 Arab Peace Initiative and Israel's security needs.

Such an initiative would offer the possibility of greater stability and set a framework for future negotiations, including for the post-Obama era.