The Palestinian Authority's plan to dismantle itself

The Palestinian leadership has a tentative strategy in place for the dismantlement of the Palestinian Authority and the establishment of a state under Israeli occupation. 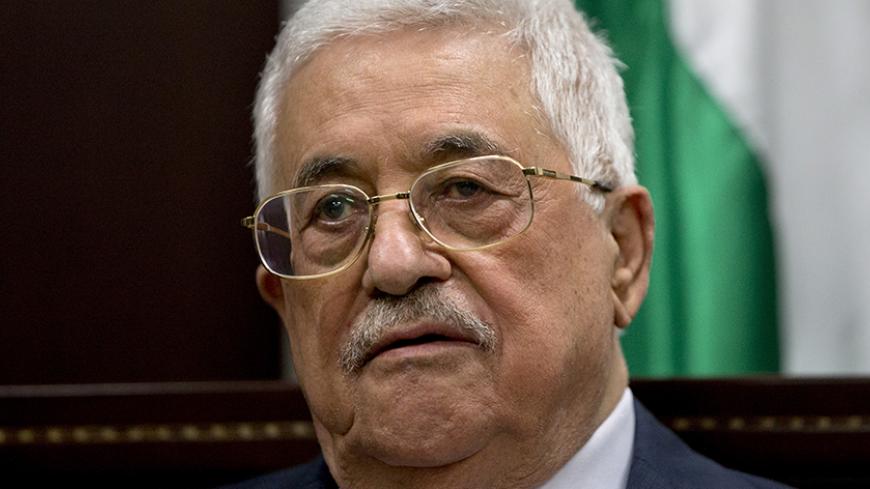 Palestinian Authority President Mahmoud Abbas listens as US Secretary of State John Kerry answers a question in regard to the current situation in the area during their meeting in the West Bank city of Ramallah, Nov. 24, 2015. - REUTERS/Jacquelyn Martin

In the West Bank these days, one thing is clear: The current status quo of random terror by individuals and a Palestinian Authority (PA) cooperating on terror prevention with Israel will not be maintained for long. The Palestinian street buzzes with rumors about a third intifada, the downfall of President Mahmoud Abbas and the collapse of the PA. All this speculation is grounded in realistic analysis of where the current Palestinian despair may lead.

A senior member of the Palestine Liberation Organization and the Fatah Central Committee told Al-Monitor on condition of anonymity that Abbas may be forced to make good on the warning given in his speech to the UN General Assembly Sept. 30 and pass responsibility over the West Bank to Israel as the occupying power.

“I doubt that the authority can survive the current crisis,” said the official. “With daily Palestinian casualties, without any hope on the horizon for a political process and with growing economic hardships, the authority risks collapsing. In the current situation, the existing agreements are whitewashing for the occupation. Israel is exploiting the status quo to prevent Palestinian statehood through massive settlement expansion. We have thoroughly contemplated the meanings and ramifications of dismantling the authority in such a way that at the end of the day would bring about a process for Palestinian statehood together with the international community. The days of us serving as [Prime Minister Benjamin] Netanyahu’s alibi for sustaining the occupation are over.”

These words make it clear that the Palestinian leadership has a tentative strategy in place for the dismantlement of the authority. It is not clear, however, if and when it will be applied.

This new approach/possibility of handing over the responsibility for West Bank security and civilian affairs to Israel means first and foremost moving the Fatah leadership headquarters from Ramallah to Cairo or to Amman. It also means the dismantlement of the West Bank's separation into Areas A, B and C, as Israel would regain full civil and security control.

The source detailed other key elements: Palestinian security cooperation with Israel would come to an end, and instead of assisting the PA directly, international aid would be channeled to Palestinian nongovernmental organizations and refugee camps in coordination with the Palestinian leadership abroad.

In parallel, he said, the UN General Assembly would pass a resolution by September 2016 declaring the West Bank a Palestinian state based on the 1967 lines under Israeli occupation. Such a drastic change would have grave repercussions on the region. There is little doubt that within such a scenario, a violent full-fledged intifada would break out. Most likely, this outbreak would be a combination of the first and second intifadas: the kind of popular uprising we have seen lately combined with armed struggle by Fatah's Tanzim, presumably in cooperation with Hamas forces from Gaza.

The region as a whole would be forced to express its solidarity with the Palestinian uprising, endangering the Israeli-Egyptian and Israeli-Jordanian peace treaties.

It's possible that fundamentalist terror groups would join the battle, especially Hezbollah and perhaps also the Islamic State operating from the Sinai Peninsula or the Golan Heights.

Under such circumstances, Israel would face a major economic burden, both from a security point of view and in terms of dealing with the Palestinian population in the West Bank under its responsibility. Strong political pressure would be exerted by the far Israeli right on the current government to annex part of this territory. The international community, including the UN and the EU, would then be obliged to intervene in the conflict, as was the case before the Oslo Accord.

A senior PA official close to Abbas confirmed to Al-Monitor the eventuality of the dismantling of the authority. This source, who has a great deal of experience in past Israeli-Palestinian peace processes, said that the goal of such a dramatic move would be to provoke an intervention by the international community toward a two-state solution process.

The above ramifications of the dismantling scenario are deeply concerning developments that could be avoided if such a peace conference took place today. Unfortunately, this seems impossible before another round of senseless bloodletting in the region breaks out.