The Palestinian leadership is contemplating a return to the "1948 strategy" of all-out confrontation with Israel. 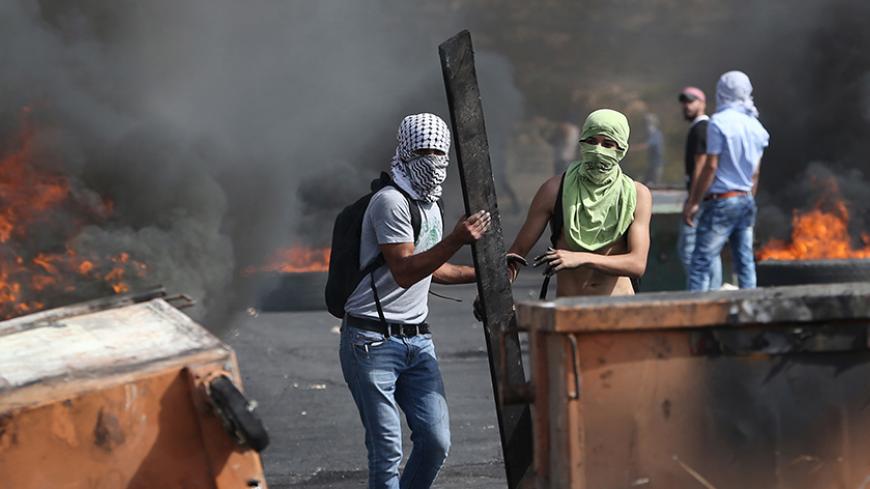 The current wave of terror attacks has many ingredients of an intifada and is probably the prelude to one. Root causes exist and are both profound and related to current developments. Palestinians, with hardly any exceptions left, have given up hope that a political process or the international community will bring about an end to the Israeli occupation and achieve the fulfillment of their independence. The humiliations that are a daily byproduct of living almost 50 years under occupation have left deep emotional scars of frustration, anger and desire for revenge. Currently, these emotions are exacerbated by a belief that Israel is altering gradually and systematically the status quo on the Temple Mount (Haram al-Sharif) in favor of more organized Jewish prayer in the vicinity of the mosques.

The political leadership in Ramallah seems too weak to confront such an intolerable situation.

Above all, the settlements and the settlers (almost half a million) are daily reminders of the hopelessness of the situation in the eyes of Palestinians.

This is fertile ground for Hamas and Islamic Jihad to incite violence in and from the West Bank. These root causes could, in the weeks and months to come, lead to a third intifada, most probably more violent than its two predecessors. A senior Fatah security official told Al-Monitor on condition of anonymity, "President [Mahmoud] Abbas has warned [Prime Minister Benjamin] Netanyahu numerous times, through secret personal messages, of this deterioration. He really wants to prevent this. He is not a man of violence and has instructed us to a nonviolent reaction to the occupation.” The angry security official also warned, "It may be too late. The Tanzim [Fatah armed forces] may soon feel compelled to join and take the lead. They will not leave the forefront of the confrontation with Israel to Hamas. This may not end up in an intifada, but in a war of independence. Israel and the United States have left us little choice."

The Fatah official sees the current crisis as a turning point — turning from conflict resolution back to armed struggle. He believes that Fatah will not remain alone on the battlefield. "With time, Hamas will join forces out of its own interests, also with Hezbollah. We count on Egypt and Jordan to at least break off diplomatic relations with Israel.” He added with grim laughter, "These are not threats, these are plans."

These remarks sound very much like a "back to 1948" Palestinian strategy; only this time with the focus on Palestinian independence and with the Arab side viewed internationally as the underdog. In the case of such an all-out confrontation, the international powers will most likely line up each according to its respective regional interests.

The United States, nearing an election year and dejected about not bringing the parties to the negotiation table, will in such a case intervene, promoting restraint and, with time, a cease-fire. That in itself will be difficult to achieve, as the Palestinian side hopes to reap political dividends from a violent confrontation.

The European Union, probably headed by the French, will seek to satisfy Palestinian political demands for statehood based on the 1967 lines with East Jerusalem as a capital. This may take the form of a UN Security Council resolution. Yet, if this were to occur in the coming year, such a resolution will probably be defeated by a US veto.

As to Russia and China, they will not be perturbed by a violent conflict erupting in what they perceive as an American interests' arena.

Israel, under the Netanyahu government, considers a prolonged Palestinian uprising as a worst-case scenario. From a security point of view, it presents a very difficult challenge, as the Israel Defense Forces will not be able to use its sophisticated weapons or its air force.

As to the diplomatic arena, it is clear, even to Netanyahu, that international sympathy will be on the side of the underdog.

Also, the resilience of the Israeli public will be put to the test, with a suffering economy. Under these circumstances, it is likely that Netanyahu will sooner or later turn to the leader of the Zionist Camp, Isaac Herzog, to form a national unity government.

From a Palestinian point of view, while most of the public opinion and much of the leadership feel that there is no alternative to a violent confrontation, it is hard to see how a confrontation will lead, at the end of the day, to the desired statehood. Israel, even with a national unity government, will not make the necessary concessions under such pressure.

A confrontation, as contemplated by the Fatah security official, may end up in a lose-lose equation, although it could prompt a major international effort for conflict resolution.

It is better for all parties involved to engage in such an effort before an intifada or an all-out war breaks out. Because a US initiative for a UN Security Council resolution is for now out of the question or in any case considered ineffective, there is today only one effective forum for conflict resolution — the P5+1 model, which proved effective in the Iran deal case. Better to adopt this model sooner than later.