Time is running out for Israelis, Palestinians

Before 2017, Palestinians and Israelis will have to make major decisions that can be condensed into one critical choice: Will both leaderships decide to view their national interests as in convergence or in conflict? 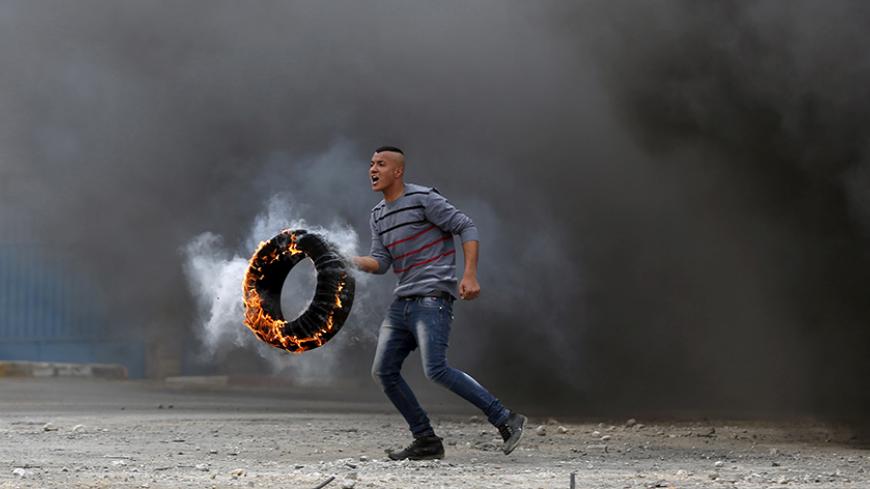 A Palestinian protester throws a burning tire during clashes with Israeli troops at a protest against Jewish settlements, in the Jalazone refugee camp near the West Bank city of Ramallah, March 27, 2015. - REUTERS/Mohamad Torokman

June 5, 2017, will mark the 50th anniversary of the 1967 Six-Day War — 50 years of occupation of the West Bank. To many Palestinians, this will mark the absolute deadline for the achievement of independence. To Israelis, it would offer a juncture for reflection on the country’s identity as a Jewish democracy. For many Israelis, the 1967 war turned out to be a bittersweet victory.

A senior Palestinian official close to President Mahmoud Abbas told Al-Monitor on condition of anonymity that time is running out for Palestinian diplomatic efforts. “We have given the political process with Israel every chance since 1988, and definitely since the Oslo Accord. But we have discovered that Israel is enamored with the occupation. Since the so-called peace process began, the number of settlers has almost quadrupled. Beginning in September this year, we will make a last diplomatic effort to allow for nonviolent resistance. Come June 2017, without Palestinian statehood, we will have no choice but to revert to an alternative strategy of achieving statehood through conflict.”

The implication was clear — the Palestinians feel that diplomacy is failing them and that the time may be nearing for a renewal of the armed struggle. Before that, and to avoid that path, they will reach out to the international community, seeking a process that imposes statehood based on the 1967 borders.

Israel is nearing a crossroads, too. The so-called one-state solution is gaining support among desperate Palestinians and Israelis. In reality, the one-state situation already exists. Stretching from the Mediterranean Sea to the Jordan River is one state, or one autonomous authority, which is totally dependent in all the aspects of its development on Israel. In other words, it’s a situation in which equality is impossible. It’s a situation of a quasi-apartheid relationship — with one state, but without a solution. By June 2017, Israel will have to decide if it is ready to share the sea-to-river land on the basis of two states and maintain its Jewish democratic identity or not. Time is running out.

Before 2017, both sides will have to make major decisions that can be condensed into one critical choice: Will the Israeli and Palestinian leaderships decide to view their national interests in convergence or in conflict? Both these options could be envisioned, so it’s up to the leaders on both sides to choose.

Political convergence of interests exists by the mere fact that the two peoples have a small land, they have much to gain from sharing basic infrastructures related to water, energy and transportation, and many of their most basic interests are interdependent — from security to tourism. Conflicts of interest persist as a result of a century of bloody and painful clashes, leading to a cycle of revenge and, ultimately, to a lose-lose equation.

Creating a convergence of interests requires a national decision-making process based on civil courage of leaders. Continuing the conflict relates to preserving hostility. It stems from a lack of rationality driven by narrow-minded nationalism and populism of leaders.

Today it seems that irrationality prevails on both sides, and, therefore, the Palestinian official’s forecast of the bitter cycles of violence in the years to come looks highly likely. Clearly, the illusion of a sustainable status quo will ultimately fade. So in the future perspective of June 2017, either war or peace loom on the horizon.

The Palestinian official described to Al-Monitor a very gruesome picture of the war option: a violent conflict with Jerusalem and the Temple Mount at its center. Other Arab countries and a diversity of Shiite and Sunni terror organizations would join in the fighting, using both primitive and highly sophisticated armament.

The Ramallah official, who has much experience in security matters, emphasized that his forecast was not a threat, but a logical analysis. In his words, “We are on the verge of the abyss, yet the fall can still be prevented by the international community.” Yet, it is hard to see the current leadership in the region taking the logical, rational decisions necessary to create a new structure of common interests. Furthermore, both Jerusalem and Ramallah may, in the months and years to come, witness a power struggle for the successions of Netanyahu and Abbas, respectively. In many ways, these battles have already begun.

This leaves the ball in the court of the international community. Asked about the Palestinian doomsday scenario, a senior US State Department official, asking that his name not be divulged, told Al-Monitor, “Washington cannot desire a two-state solution more than the parties. Our views and readiness are known to Israel and the Palestinian Authority. For now, unless we hear otherwise, they are on their own.”

With American reluctance to push the sides further, Israelis and Palestinians must act now. Both leaderships must comprehend this. They must move beyond their habits and create political solutions before war breaks out, not after.