Prime Minister Benjamin Netanyahu knows that he cannot go ahead with annexation without the endorsement of US President Donald Trump. 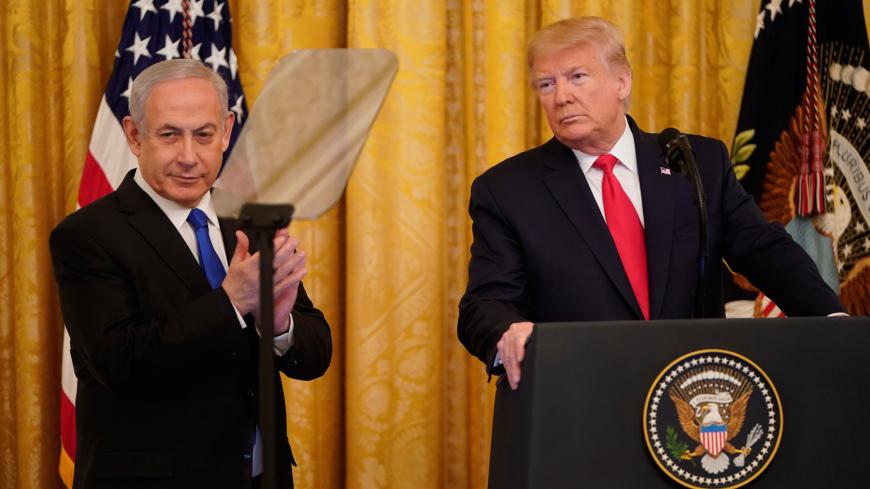 Israel's Prime Minister Benjamin Netanyahu applauds as he and US President Donald Trump deliver joint remarks on a Middle East peace plan proposal in the East Room of the White House in Washington, US, Jan. 28, 2020. - Reuters/Joshua Roberts

“[Prime Minister Benjamin] Netanyahu is entirely dependent on [President Donald] Trump for the annexation. We have no illusions that he would operate against decisions taken in the White House.” These words were told to Al-Monitor by a senior Likud minister speaking on condition of anonymity. The minister spoke on June 23, exactly a week before the July 1 target date set by Netanyahu for the start of the annexation — or “imposing Israel’s sovereignty,” as he calls the process.

However, according to all the hints and briefs that Netanyahu has been scattering in recent days, it is already clear to everyone that the grand annexation of 30% of West Bank and Jordan Valley territories will not be realized in the near future and certainly not prior to the US elections in November. Now he talks about a gradual annexation in stages on limited territory.

At the end of last week, US Ambassador to Israel David Friedman left Jerusalem for Washington where he is expected to participate in a decisive meeting in the White House. That meeting will deal with one question: whether to give the American green light to a limited annexation. Secretary of State Mike Pompeo, Trump’s son-in-law White House adviser Jared Kushner, and Middle East Envoy Avi Berkowitz are expected to participate at that meeting, which could take place as early as June 24.

According to various media items, what will be placed on the table is a program for a symbolic annexation of several settlements in the Jerusalem area. Nothing of this limited annexation program will bear resemblance to the bombastic announcements of the White House six months ago regarding imposing full, historic sovereignty. According to a Reuters report, Trump himself could join in some of the discussions.

For Netanyahu, this is a dramatic event. Israel’s prime minister is concerned about Trump's political problems, as he faces a difficult election campaign and political uncertainty. Netanyahu will not say or do anything against the official White House stance, certainly nothing to politically harm or embarrass Trump or cause political damage.

The truth is that without Trump in the White House, plans for the “great annexation” have no future either. Netanyahu has been closely following the recent polls disseminated in the United States, pointing to the strengthening of Democratic candidate Joe Biden. Israel’s prime minister receives ongoing reports on Trump’s campaign —for example, the major failure of the president’s election campaign in Tulsa, Oklahoma, on June 21. Netanyahu is very concerned over the possibility of a Democratic president returning to the White House this November.

Netanyahu uses his right-hand ally and friend, Israel’s Ambassador to the United States Ron Dermer, to send political feelers out to the movers and shakers in Washington. Almost all Republican congressional members have an open-door policy to Dermer, as does the White House. Thus, Dermer has been doubling up on his reports to Netanyahu from Washington, and in their conversations, they (Netanyahu and Dermer) analyze the situation — sometimes several times a day.

On June 22, 116 House Republicans published a letter to Netanyahu backing Israel’s right to determine its borders. "We support the Trump administration’s engagement with Israel on the Vision for Peace Plan, which was based on the critical premise that Israel should never be forced to compromise its security. We assure you that we will stand shoulder-to-shoulder with Israel and oppose any effort to apply pressure," said the letter. In another letter, sent to Trump, the senior Republicans stated, "We support Israel's right, as provided in the Peace to Prosperity Plan, to declare its sovereignty over Jewish population centers and strategic territories in the West Bank.’’

“I imagine that none of these letters surprised Dermer or Netanyahu,” said a source close to the Prime Minister’s Office to Al-Monitor on condition of anonymity. “They were intended as a tailwind toward any kind of annexation process, and to strengthen Trump vis-a-vis the heavy pressures inflicted on him by Europe, Jordan and Arab countries who warn that annexation will bring down catastrophe on the Middle East.’’

Six months have passed since the impressive ceremony that Trump organized for Netanyahu in the White House in January 2020 in which the latter was officially gifted with US annexation approval. This was in the very midst of Netanyahu’s fateful election campaign, while he was simultaneously coping with a bribery indictment. Trump’s program was marketed by Netanyahu as a historic opportunity and a dream come true for Israel’s right wing, thus assisting Netanyahu in his election campaign. But now, the realization of the plan is cast in doubt.

Over the past months, the two leaders' positions have changed. Netanyahu became stronger on the political front and, against all odds, fortified his base. It is Trump who is not the same president as the one who strode confidently last January toward his second term of office. Trials of all kinds have landed on him, one after another: First, the coronavirus hit New York, then the unprecedented riots inundated large cities. These all caused Biden to rise in the polls. Now Trump is concerned with his own issues and especially his political survival, and Israel’s prime minister is very aware and concerned as well.

Netanyahu has clear interests in a Trump victory and will do his best to help and not hinder; that’s why he is trying to draft the Jewish and evangelical votes. In addition, Netanyahu’s long experience with Democratic presidents (first Bill Clinton, then eight years of Barack Obama) who pressed him towards Palestinian statehood and evacuation of settlements – taught him that the scales could turn against him at any time. Therefore, Netanyahu must be moderate. Yesha Council officials [umbrella organization of the settlers] met with Netanyahu on June 2. They understood that the prime minister is concerned regarding Trump’s chances of re-election, and his conclusion is that he must be very levelheaded in the current era of uncertainty.

In recent years, actions by the Trump administration caused Netanyahu’s popularity to rise among Israel’s right-wing sector, but not only them. Israelis know how to appreciate friendship with American presidents and are unhappy when the two countries are at odds. Netanyahu, a virtuosic campaigner, knew how to squeeze this lemon till it was dry. He turned Trump into a central figure in the recent Israeli election campaigns he led. He made sure to trumpet the recognition given by the United States to the Golan Heights. He emphasized the transferring of the American Embassy in Israel to Jerusalem, and he made clear that everyone knew about his direct line to the Oval Office. The annexation plan should make the jewel of this crown.

The person to determine if there will be annexation and, if so, the extent of annexation, is none other than the president of the United States. Netanyahu is less worried about getting the support of Blue and White leaders Defense Minister Benny Gantz and Foreign Minister Gabi Ashkenazi. In a worst-case scenario, if they refuse to back his plan, Netanyahu can threaten them with a fourth election campaign. In any event, the current Blue and White showings in the polls are so poor that Netanyahu will probably have no problem convincing them.