Trump offers another gift to Netanyahu

The latest statement by Ambassador David Friedman on the possibility of annexing parts of the West Bank indicates that Prime Minister Benjamin Netanyahu and President Donald Trump are tightly coordinated. 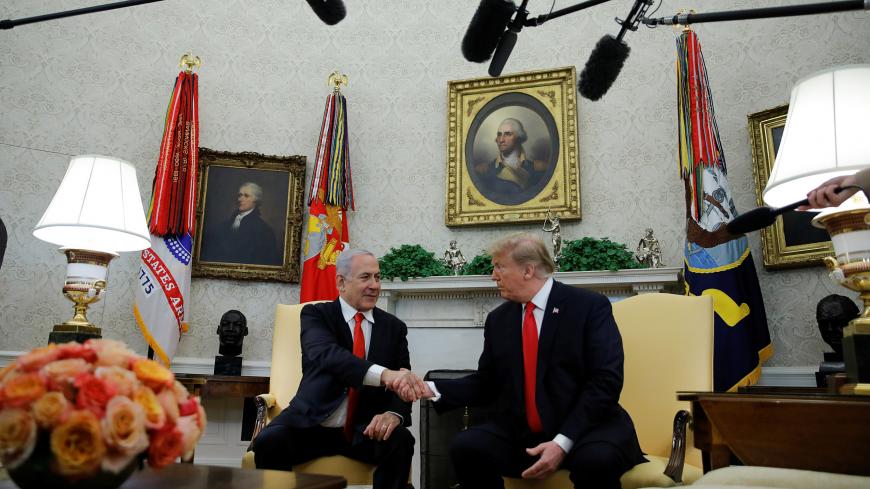 No one in Prime Minister Benjamin Netanyahu's office was surprised when US Ambassador to Israel David Friedman told The New York Times on June 6 about the possibility of Israel annexing some West Bank territories. As we recall, Friedman had said that “under certain circumstances, I think Israel has the right to retain some, but unlikely all, of the West Bank.” This statement aroused a giant storm throughout the Middle East and in Israel’s political space. It was interpreted as an American hint that the United States may recognize annexation of certain Israeli settlements in the West Bank, if and when Netanyahu declares such a course of action.

The ambassador’s statement did not take the prime minister's office by surprise. In fact, it seems that ever since President Donald Trump entered the Oval Office, almost no American moves or decisions really surprised the prime minister's office in Jerusalem. The prevailing assessment is that the opposite is true. “You can’t drive a wedge between Trump and Netanyahu,” one of Netanyahu’s associates told Al-Monitor on condition of anonymity. “They are always on the same page, whether directly or, usually, via the ambassadors.” This close associate was referring to two ambassadors: Ron Dermer, Israel’s ambassador to Washington, and Friedman, the American ambassador to Jerusalem.

A temporary high point was achieved before the last elections in April, when Trump gave Netanyahu a tremendous campaign gift in the form of American recognition of Israeli sovereignty on the Golan Heights. When it emerged that Israel was headed toward another electoral campaign, the need arose for additional US emergency assistance to Netanyahu. Something along the lines of US President Nixon’s arms airlift to Israel during the 1973 Yom Kippur War. Then, it was to save the Jewish state from defeat in the battlefield. Today, it is to save Netanyahu’s neck. As simple as that.

It began on May 27, several days before Netanyahu’s deadline for assembling a coalition government. Trump himself expressed support for Netanyahu on Twitter: “Hoping things will work out with Israel's coalition formation and Bibi and I can continue to make the alliance between America and Israel stronger than ever. A lot more to do!” he tweeted. The presidential tweet was viewed in Israel as a direct, inappropriate interference of the American president in Israel’s political process. However, not a single Israeli volunteer was found to criticize Trump for this — not in Blue and White or in Labor.

When it turned out that Netanyahu failed to craft a government, the US president did not hide his frustration. Now is the continuation: Friedman expressed support for possible Israeli annexation of some of the territories held by Israel. But according to some of the commentators, this announcement may paradoxically cause complications for Netanyahu among the heads of the settlers should the prime minister delay implementation of the promise. After the elections the settlers would want to know why Netanyahu is in no rush to implement annexation when the United States also supports it.

According to sources close to Netanyahu, the reality is the opposite: “This interview was not given by chance,” a high-placed Likud official told Al-Monitor on condition of anonymity. “The comment from the ambassador regarding annexation was not a slip of the tongue,” he added. “It was totally coordinated with the prime minister to answer Netanyahu’s need for right-wing votes, especially those of the Religious Zionists.”

The explanation is simple: In this campaign, Netanyahu is fighting for his political life and personal freedom. He must secure a majority of 61 Knesset members without Yisrael Beitenu leader Avigdor Liberman. He must defeat Blue and White by a convincing margin. He is a prime minister facing three severe bills of indictment and he cannot lose. This is not an easy task. One of the important pools of votes that Netanyahu is storming is that of the Religious Zionists; in other words, the settlers. The odds are good that former ministers Ayelet Shaked and Naftali Bennett (whose New Right party did not pass the Knesset entry threshold on April 9) intend to run again in the next round — whether together or separate from the United Right party headed by Rabbi Rafi Peretz and Bezalel Smotrich. If so, Netanyahu will be forced to siphon off some of the Religious Zionist votes to survive.

Ambassador Friedman’s statement and the well-known closeness between the two figures have instilled new hope in Netanyahu. The day after Friedman’s announcement in The New York Times, and in anticipation of the upcoming elections, it became clear that the leaders of the settlers are planning on speaking out against Netanyahu’s policies in the West Ban, criticizing his allegedly soft approach and urging him to annex settlements.

In other words: Friedman’s words were actually a type of preventive strike. Netanyahu will tell the settlers that while they go out and demonstrate, he (via Friedman) is the only one able to deliver the goods. Netanyahu’s message is simple: Friedman and White House adviser Jared Kushner are “his men.”’ They “bring” him President Trump on a silver platter. Netanyahu is the one to achieve a partial American recognition of a possible annexation. Thus, if the settlers really want their localities to be annexed to Israel, Netanyahu must remain in charge. Period.

Friedman is one of the most influential of the American ambassadors to Israel in the current era. Before his appointment, which was slightly delayed, many eyebrows shot up in Jerusalem and also in Tel Aviv. Friedman is identified with Jewish settlement in the West Bank and was viewed as a strange bird in the US administration. Since then, several years have passed and it turned out that Friedman is close to Trump and Netanyahu. A senior Israeli diplomat once described Friedman as “a dedicated lawyer who wants his client’s mission to fail," with regard to the "deal of the century" as crafted by Kushner and Jason Greenblatt. While Friedman is ostensibly a civil servant who is promoting the American policy of securing an arrangement between Israel and the Palestinian Authority, he really is ideologically opposed to any territorial compromise between Israel and the Palestinian Authority. Thus, he really is of two minds on the issue.

As of this very moment, Friedman is focused on one clear goal: participation in the American effort to help reelect Netanyahu. Will Friedman’s annexation statement be the last rabbit to be pulled by Netanyahu out of his Washington hat? It's not at all clear. “We’ll get what we want from the Americans,” a senior Likud source told Al-Monitor, “even Trump himself [his presence], if he’ll become convinced that a surprise visit of his to Jerusalem will save Netanyahu.”

The office of Ambassador Friedman refused to comment. The prime minister’s office categorically denied any coordination between Friedman and Netanyahu.