White House advisers Jason Greenblatt and Jared Kushner object Prime Minister Benjamin Netanyahu's intention to annex settlements before the March 2 elections, but Netanyahu has no intention of giving up. 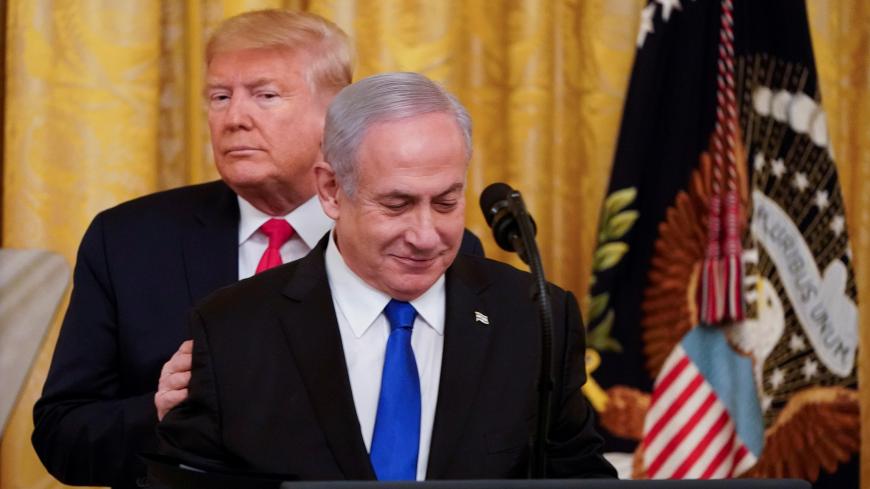 The White House will come under unprecedented siege in the coming weeks, spearheaded by aircraft carrier “Ron Dermer” (Israel’s ambassador in Washington) and including the “David Friedman” (US ambassador in Jerusalem) task force along with many other units. Israeli Prime Minister Benjamin Netanyahu will throw everything he has into this fray: Sympathetic members of Congress, evangelical lobbyists, associates, rabbis, anyone who knows how to exert pressure on President Donald Trump. All will be mobilized for the campaign with the express goal of eliciting a green light from the president for some sort of territorial annexation in the West Bank prior to Israel’s March 2 elections.

The defensive ring around the White House and the commander-in-chief will be no less impressive, led by his son-in-law and adviser Jared Kushner, with the flanks covered by former Middle East envoy Jason Greenblatt, State Department officials and others. This group invested significant energy over the past two years in mobilizing the support of pragmatic Arab states for Trump’s Israeli-Palestinian “deal of the century,” despite its unprecendented pro-Israel bent. Kushner and Greenblatt know that a lightning settlement annexation move will sound the death knell for Trump’s plan and lead most of the Arab world to disavow it. They will not allow this to happen, but they are facing the most determined, focused, wily and desperate rival ever: Benjamin Netanyahu who is in the throes of the battle of his life.

Netanyahu must have annexation — now. He “sold” the Trump plan to his right-wing supporters with the promise that it would include West Bank land annexation. He was quick to put the cart before the horses when he declared Jan. 28, right after the White House unveiling ceremony, that on Feb. 2 he would bring before the government the proposed annexation of all Israeli settlements in the West Bank, the Jordan Valley and the northern shore of the Dead Sea. His associates rushed to issue victorious tweets, but the celebration turned out to be premature. Netanyahu’s eagerness had tripped them up. Had he resisted temptation of making an early announcement and taken the government by surprise at its upcoming weekly session with the proposed annexation resolution, he would have perhaps been able to get away with it and deal with the fury of the White House later. However, the premature announcement prompted an immediate White House backlash that stopped Netanyahu in his tracks. Ambassador Friedman had been vanquished by Kushner and Greenblatt. Friedman serves in two capacities, perhaps even three. His official day job is US ambassador to Israel; unofficially he has also assumed the roles of Netanyahu’s personal ambassador in Washington and the settlers’ special envoy to 1600 Pennsylvania Avenue. On Jan. 28, he was forced to give up the latter two, at least for now.

“Friedman was the one who pushed Netanyahu to announce immediate annexation,” a senior Israeli diplomatic source told Al-Monitor on condition of anonymity. “Not that Netanyahu needed this push — after all, he needs this annexation like oxygen — but Friedman was the one who promised him a tail wind and hinted the White House would look the other way. Friedman was wrong and Netanyahu is paying the price.” And the price is heavy. The settlers, leaders of the political right and Netanyahu’s Likud party had agreed to “swallow” the bitter pill of a future Palestinian state with its capital in East Jerusalem by washing it down with the elixir of annexation. On the morning after, they found themselves facing Israeli recognition of a Palestinian state, but without the annexation, which had been postponed to an unknown date “after the elections.”

The latest polls suggest that despite expectations to the contrary, the unveiling of the deal of the century did not significantly change support for the two major parties — Likud and the opposition Blue and White. Even after Netanyahu’s victory laps in Washington and Moscow, the opposition, led by three former army chiefs, is still leading the Likud by two to four Knesset seats, and the tie between the right-wing bloc and the center-left persists. If these numbers hold up, Netanyahu is finished. He will not be able to demand first place in a rotating premiership with Blue and White leader Benny Gantz given the three criminal charges filed against him this week in the Jerusalem District Court. He is therefore focusing on one goal only: restoring the support of 300,000 Likud and right-wing voters who abandoned ship in the September 2019 elections (after voting for Netanyahu in the April elections), and fighting for “soft-right” swing voters who account for two to three Knesset seats and are undecided whether to vote for him or for Gantz. “This crowd will only come home to the Likud if annexation takes place now,” a senior Likud figure told Al-Monitor on condition of anonymity. “Netanyahu knows this and that is why the annexation is now his only lifeline. If he can deliver, he has a chance of getting through this, if he does not, he is done for.”

The centrist Blue and White party also understands this. Almost two months ago, Gantz appointed Maj. Gen. (Res.) Amir Eshel, former Israel air force commander, as his special envoy to the White House. Eshel kept Gantz and the other generals abreast of developments regarding the deal of the century and they were not caught by surprise when it turned out the plan would be unveiled prior to the elections. At none of these meetings, including the Jan. 27 Gantz meeting with Trump, was there any hint that the Americans would allow Netanyahu to carry out the annexation plan before March 2. When Netanyahu’s intention came to light, right after Trump’s East Room speech, Blue and White went into an internal state of emergency mode. The party — which consists of hard-core left wingers (such as Knesset members Ofer Shelah and Yael German) as well as right-wing ideologues (former Defense Minister Moshe Yaalon and one-time Netanyahu aides Zvi Hauser and Yoaz Hendel) — is torn over the annexation issue. Should it come up for a Knesset vote, party leaders would face a tough decision and risk dissent in its ranks.

For now, the White House is saving Gantz and company this embarrassment. At the same time, however, Gantz dropped an embarrassing bombshell of his own, announcing that he would present the Trump plan for Knesset approval “at the earliest possible opportunity.” Such a move would set off a riot within Netanyahu’s government coalition. How would right-wing Likud lawmakers and other coalition members vote for a plan that establishes a Palestinian state with its capital in East Jerusalem? “Embarrassment will be met with embarrassment,” a senior Blue and White source told Al-Monitor on condition of anonymity. “We have no intention of giving Netanyahu carte blanche to embarrass us. Blue and White supports Trump’s plan but does not believe in unilateral measures on the eve of elections.”

Blue and White is now reenforcing the inroads it made into the White House. “The conversation between Benny Gantz and the president was good and there was chemistry between them,” another senior source in Blue and White’s Knesset faction told Al-Monitor on condition of anonymity. “True, as far as Trump goes, Gantz cannot be Netanyahu, but for now it is important to show the Israeli public that even after Netanyahu, ties with Trump will continue and the sun will keep shining. The fact that he was welcomed to the White House against accepted protocol helped us prove this.”

Nonetheless, and despite the photo of Gantz with Trump in the Oval Office, Blue and White knows that one photo of Netanyahu annexing territory before the elections will wipe out everything else. “We hope the Americans will not let this happen,” one of the party leaders told Al-Monitor on condition of anonymity. “Publishing a plan that was in the works for three years is quite OK, execution of irreversible moves on the eve of elections is already blatant intervention.”