Prime Minister Benjamin Netanyahu and Blue and White leader Benny Gantz have been invited to the White House on the same day the Knesset is set to discuss Netanyahu’s request for immunity involving corruption charges. 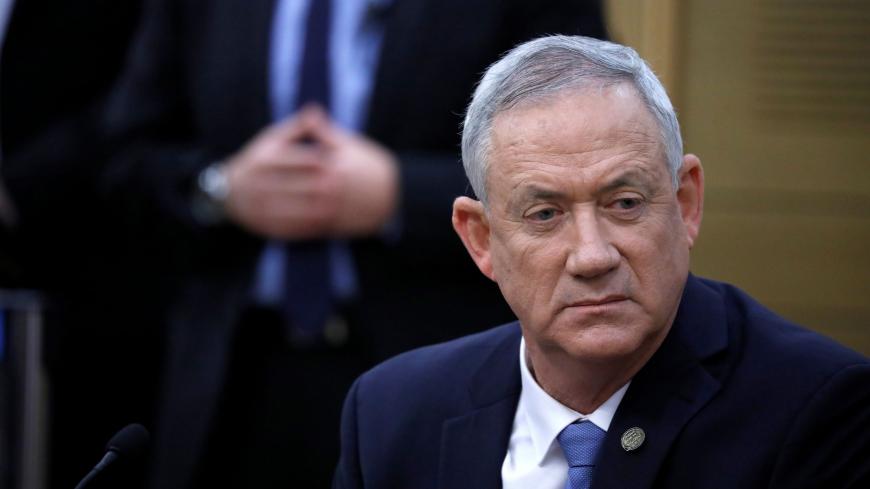 This is how things look at the moment from the perspective of Blue and White’s leadership, which has been rapidly losing altitude over the past few days: President Donald Trump’s “deal of the century” is not a historic Israeli-Palestinian peace proposal, but a deal between Trump and Prime Minister Benjamin Netanyahu. In short, the president is rescuing Netanyahu from his political death, and in return, Netanyahu will help Trump’s 2020 reelection campaign, using all the tools at his disposal (and he has quite a few) to mobilize the evangelical component of Trump's base, and that's just for starters.

Trump is trying to prove his vitality and responsible leadership at the height of his Senate impeachment trial by hosting Netanyahu along with Blue and White leader Benny Gantz at the White House on Jan. 28 to present his Middle East peace plan. Meanwhile, Netanyahu is pounding the Blue and White election agenda into dust and throwing the Knesset discussions over his immunity from prosecution into the political trash bin. On Jan. 28 in the United States, television screens will be split between the impeachment trial and the White House summit. In Israel, screens will be split three-ways: on the right, Trump’s trial; on the left, Netanyahu’s immunity proceedings; and in the middle, Netanyahu, king of the White House.

Gantz, who on a clear day could already smell the heady scent of the Prime Minister’s Office, will be dragged by his hair to the White House on the same day the Knesset is supposed to vote on forming a committee to debate Netanyahu’s request for immunity from prosecution on corruption charges. In popular parlance, Trump and Netanyahu have “screwed” Gantz. A senior Blue and White source told Al-Monitor that he is convinced the latest developments were completely orchestrated: Netanyahu coordinated with Knesset Speaker Yuli Edelstein, who scheduled the Knesset debate for Jan. 28. At the same time, Netanyahu coordinated with the White House, which invited Netanyahu and Gantz to meet Trump that same day.

Gantz will now have to decide what to do about the immunity debate. If he insists that it proceed as scheduled, he will look like a petty politician challenging a prime minister who is on a historic, diplomatic mission. If he postpones the debate, he could miss the immunity boat as it sails toward the March 2 election deadline. Thus, Gantz only has bad choices. Netanyahu, once on his political deathbed, is now in recuperation — running the show, overseeing historic moves, dictating the pace — while his people are busy building Gantz’s political coffin.

One of Gantz’s closest associates, speaking on the condition of anonymity, told Al-Monitor, “If it were possible to fly a drone over the White House, we would see the gentleman David Friedman [US ambassador to Israel], Jared Kushner [Trump’s adviser and son-in-law], the pro-settlement lobby and a host of Chabad rabbis digging a deep hole for Benny Gantz. This group [the settlers and the Chabad adherents] has full access to the White House and especially to Misters Kushner and Friedman. They set the tone and they run the system.”

According to top Blue and White sources, never has a US administration interfered in such a crass and blatant manner in domestic Israeli politics on the eve of elections. “Out of 365 days on the calendar, the White House chose to invite Netanyahu and Gantz on the very day of the vote expected to approve the formation of an immunity committee,” said the Gantz associate. “A historic coincidence, indeed.”

That is not Gantz's only problem. According to leaks from Netanyahu’s camp, Trump’s historic peace plan is, in fact, an unprecedented boon for Israel. The plan, according to leaks, would allow Netanyahu to annex and impose Israeli sovereignty over all the West Bank settlements. If the Palestinians reject it, a certainty, Netanyahu will also be able to annex the Jordan Valley. With that, Netanyahu will officially be declared king of Israel, bring back Likud voters who jumped ship in the September 2019 elections and draw closer to garnering the 61-seat majority he needs to form a government, a target that appeared an insurmountable hurdle only moments ago.

Some in the Blue and White urged Gantz to decline the Trump invitation issued at Netanyahu’s initiative. “He will look like an extra on a film set, an uninvited guest at a royal wedding,” one Blue and White senior told Al-Monitor on the condition of anonymity. “Although they did invite him, they will not miss an opportunity to humiliate him, to present him as a junior aide to the person running the show, which is Netanyahu. Given these circumstances, he [Gantz] would be better off staying home.” This opinion is a minority view within Blue and White.

“We do not have the privilege of turning down an invitation from the president of the United States,” said another Blue and White source, speaking on the condition of anonymity. “We have to see the glass a quarter full and try to leverage it. Gantz is part of the move, his invitation to the White House proves the Americans are taking into account that they may have to do business with him after the elections. It is not so horrible.”

There is also a middle ground between the opposing views. “Gantz should make his arrival in Washington conditional on full participation in the process,” another senior Blue and White source said, speaking on the condition of anonymity. “He must send representatives to take part in the discussions with the White House on the peace plan. They should nail down every detail of the visit, even including photo angles, Gantz’s position during the event and the meeting he will get with Trump, in the same format and with the same pomp as Netanyahu. Absent all of that, he should simply not go.”

Not everyone in the Blue and White leadership is convinced that Trump is the one rushing to Netanyahu’s aid. “The president is not completely involved,” one of Gantz’s close associates told Al-Monitor on the condition of anonymity. “He is being activated by remote control. He is being sold a facade showing that the Washington summit is good for him in light of the impeachment proceedings. Those running the show are the people of the pro-Israel lobby at the White House, led by Friedman and Kushner. They are the ones mobilizing the president and hitching him to the Netanyahu salvage operation. Trump is indifferent.”

Gantz now faces the most significant challenge of his brief political career. Netanyahu has devised the perfect ambush, sending Gantz into crossfire from which it will be hard to emerge unscathed. Gantz had been leading Netanyahu in the polls in recent weeks by three to five Knesset seats. Netanyahu is now expected to bridge that gap and perhaps even go beyond it. In terms of Netanyahu's suitability for the premiership, he is expected to go up in the polls, returning to his previous lead, which Gantz had been consistently chipping away over the past year.

“Netanyahu will now take advantage of the new agenda until election day. He will squeeze this lemon to the very end and dictate the pace,” another senior Blue and White source said on the condition of anonymity. “We will end up wishing for President Reuven Rivlin’s [previous] compromise proposal [for rotating prime ministers].