Israeli Prime Minister Benjamin Netanyahu must get his political partner Defense Minister Benny Gantz on board first for US President Donald Trump to endorse his annexation plan. 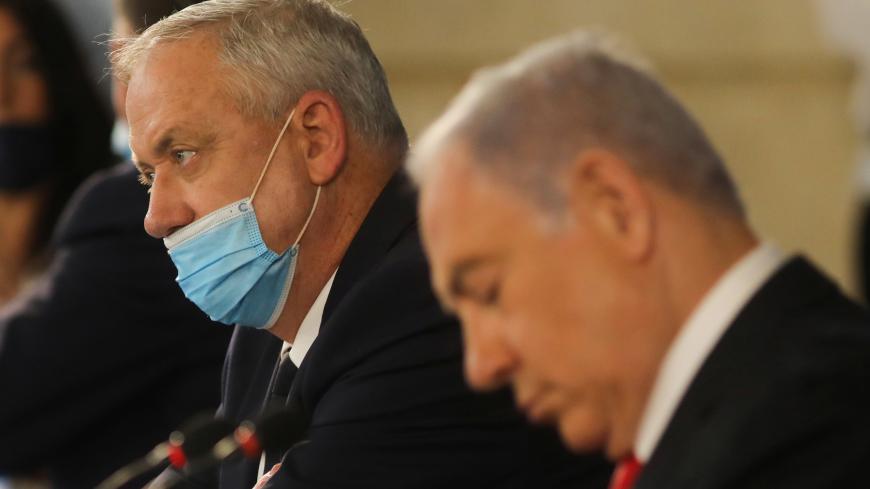 Israeli Prime Minister Benjamin Netanyahu convened a meeting June 7 with Defense Minister Benny Gantz and Foreign Minister Gabi Ashkenazi to discuss the planned annexation of West Bank lands in accordance with President Donald Trump’s blueprint. The surprise participation by US Ambassador David Friedman gave rise to much speculation. Friedman, a staunch annexation advocate, seems to have been cast in the role of mediator between Netanyahu and the two former military chiefs, his political rivals who are now members of his unity government.

Although Gantz and Ashkenazi have been keeping a low media profile on the explosive issue, they have made clear to Netanyahu that they will not rubber stamp any annexation plan he proposes and, in any case, would not give their OK without a green light from the White House.

Friedman's message at the unusual gathering appeared to boost Blue and White’s position. He said Trump would not give the nod to territorial annexation absent agreement among the top echelons of the Israeli government.

The rift that has opened on the political right among annexation supporters and opponents, who view it as a precursor to establishment of a Palestinian state, further complicates Netanyahu’s predicament. In any case, Netanyahu is unlikely to move without a go-ahead from Washington since he is loath to damage his excellent relationship with the Trump administration.

Where, then, is Netanyahu headed? His foreign and defense ministers seem to have no idea. According to a senior Blue and White source, the two have not seen the final maps drawn up by Israeli and US officials delineating the territory to be annexed and the prospective territory for a possible Palestinian state because Netanyahu is deliberately obfuscating the details.

It is undoubtedly a strange state of affairs, given the historic issues at stake and their incendiary political and security repercussions. According to Netanyahu’s coalition agreement with Blue and White, as of July 1 he can push ahead with annexation, or “implementing Israeli sovereignty,” as he describes it, but without the approval of Gantz and Ashkenazi, he lacks the required government majority to move ahead.

The two have not been taken in by Netanyahu’s vague talk about history in the making. They did publicly support the plan for Israeli-Palestinian peace that Trump presented on Jan. 28, but while Netanyahu has taken a maximalist position advocating the annexation of as much West Bank land as possible, Gantz has taken a minimalist approach. He is also adamant about the need for White House approval.

There are growing indications that Gantz and Ashkenazi are maintaining an independent position. Both served as the country’s top soldiers; both are familiar with the history of Israeli negotiations with the Palestinians, with the lay of the land and with Israel’s defense and security exigencies. They also both know senior American officials from their past and current positions. They have been frequent guests at the White House and Pentagon and have direct links to administration officials. Netanyahu is well aware of their status. For the first time in many years he is not the only senior figure running the show. As long as Israel was led by a right-wing government, with Netanyahu serving as both foreign and defense minister at various times, he was a one-man band. Now he needs Gantz and Ashkenazi to promote the annexation he aspires to leave as his legacy.

German Foreign Minister Heiko Maas is scheduled to pay a brief visit to Israel on June 10 against the backdrop of harsh European criticism of the annexation plan. The German diplomat will hold a video conference with leaders of the Palestinian Authority and then fly to neighboring Jordan. The official reason for the visit is for him to become acquainted with his new Israeli counterpart Ashkenazi, but Maas will likely warn against the repercussions of annexation. A Foreign Ministry media briefing on June 8 reflected the tensions ahead of Maas' visit, with Israeli officials suggesting that annexation would harm bilateral ties. The officials expect Germany to feel less committed to defending Israel at international forums once it assumes the presidency of the European Union next month. Ashkenazi is hearing similar assessments from Foreign Ministry analysts.

Netanyahu, obviously, does not like the overt independence of his defense and foreign ministers. They have paid a heavy political and public price for their agreement to join the Netanyahu government after three election campaigns devoted to unseating him. The results of a June 8 poll by Channel 12 News attest to the price that Blue and White paid for its decision to join Netanyahu. The results indicate that if elections were held now, Gantz’ party would plummet to 12 Knesset seats, compared to the 33 Blue and White received in the March 2 elections, whereas Netanyahu’s Likud would get 40 seats, four more than in March.

Under his power-sharing deal with Netanyahu, Gantz is scheduled to take over as prime minister in October 2021, but the more altitude he loses in the polls, the greater Netanyahu’s temptation to find an excuse to dismantle the current government and bring about a fourth round of elections. However, Netanyahu also has other considerations. He cannot be certain of Trump’s November reelection and will therefore rush to carry out annexation while Trump is still in office. In private conversations and public statements, he reiterates that the “historic window of opportunity” may never open again.

In the evening hours of June 7, Netanyahu met with 12 settler leaders in an attempt to assuage their concerns, telling them the maps had yet to be finalized but promising that their security would be protected. Participants told Al-Monitor that Netanyahu said Israel must take advantage of Trump’s presidency to impose Israeli sovereignty over the settlements and make sure Trump thinks Israel cares about his plan and appreciates its largesse. That does not mean we support the establishment of a Palestinian state, and even the proposed resolution we will bring to a government vote will not contain the words “Palestinian state,” he told the settlers. They seem to have been persuaded. Now Netanyahu has to convince Gantz to back the proposal and get Trump's blessing.