Netanyahu’s dilemma over his annexation plan

Prime Minister Benjamin Netanyahu must now decide whether he wants to go ahead with his annexation plan, or hope that the White House will get him out of it. 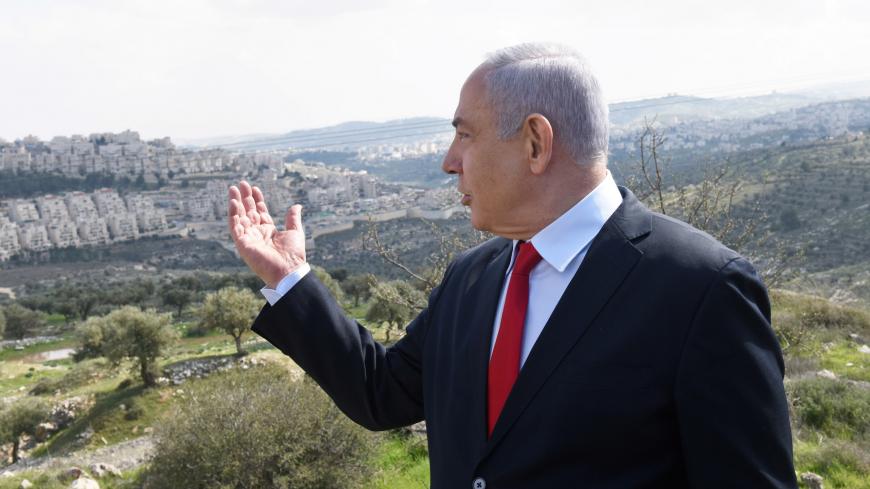 Less than a month before the July 1 target date allowing Prime Minister Benjamin Netanyahu to bring up to vote annexation of a significant part of the West Bank, no one has any idea where the country is heading. Netanyahu’s intentions are unclear. He continues to trumpet the historic opportunity afforded by the green light for annexation that President Donald Trump gave Israel in January, but no one knows what Netanyahu really means to do. Will he take advantage of the opportunity offered by the Americans to declare Israeli sovereignty over 30% of the West Bank on July 1? Will he annex a smaller portion of land? Will he delay the move? Will he forgo the whole idea at this time?

Netanyahu is torn between polarized ideologies and the political and security risks entailed in annexation. He is also sorely tempted to go down in the history of Israel’s ideological and political right in a move that would overshadow another historic precedent he set this year in becoming the first incumbent premier to stand criminal trial.

The prime minister faces multiple fronts as he mulls his epic decision. The most familiar is the right wing, where opposition to the move on the part of West Bank settlers and their leaders, as detailed here this week by my colleague Mazal Mualem, is intensifying daily.

On June 4, David Elhayani, the head of the settlers’ umbrella organization Yesha Council, said Trump and his son-in-law Jared Kushner have “shown through the proposal that they are not friends of the State of Israel and do not consider the security and settlement interests of the State of Israel.” Elhayani's accusation, prompted by the realization that the Trump plan also envisions the establishment of a Palestinian state, set off a storm. Netanyahu lambasted Elhayani for his ingratitude to the US leader. “President Trump is a great friend of the State of Israel. He has led historical moves for the State of Israel,” said Netanyahu. Elhayani, however, was unrepentant and refused to back down.

In fact, it seems as if the settlers’ take on the Trump plan has prompted second thoughts, even by Netanyahu. “Annexation would truly be a historic move,” one of Netanyahu’s associates told Al-Monitor on condition of anonymity. “The question is whether Netanyahu would also go down in history as the person who agreed to the establishment of a Palestinian state west of Jordan by his very acceptance of Trump’s ‘deal of the century.’ This argument is no less convincing than the counterargument,” the associate said.

Several other land mines besides settlers and leaders of the rightist Yamina party also obstruct Netanyahu's path to annexation. These include vehement European opposition, adamant rejection of the move by some Arab states, among them his allies in the Gulf, the expected response by Jordan’s King Abdullah and the recommendations of Netanyahu’s security chiefs. Then there are the obstacles he faces within his newly installed government from his rival/partner Alternate Prime Minister Benny Gantz and Foreign Minister Gabi Ashkenazi. Luckily for Netanyahu, the duo has also not decided what to do about this explosive issue they have been waffling on for over a year.

Gantz, in his role as defense minister, instructed army chief Lt. Gen. Aviv Kochavi this week to accelerate military preparations for possible implementation of the annexation, prompting criticism within his own center-left political camp. His instructions could mean either that he is “going along” with Netanyahu’s intentions and will not stand in his way or that he foresees a real threat of a meltdown in the Palestinian territories.

Israel’s military planning for 2020 focused on Iran and mainly on dislodging its entrenchment from Syria. In light of the latest developments, the Israel Defense Forces (IDF) could find themselves dealing with friction in the territories and an escalation into an armed confrontation with the Palestinians or a third intifada. Most military experts, former security chiefs and retired generals argue that the annexation would cause more harm than good. Netanyahu himself was of the same mind most of his life and firmly rejected annexation proposals whenever settlers and right-wing leaders raised them. The prime minister is now facing a historic opportunity that is slipping away with Trump’s decline in the polls and the prospects of US president's possible defeat in November. Netanyahu is asking himself what is preferable: To be the one who drops the ball so close to the goal post or the one who mires Israel in a third intifada while laying the ground for a Palestinian state once again (following his historic 2009 Bar Ilan pledge to allow the founding of a Palestinian state).

Maj. Gen. (res.) Amos Gilad, formerly director of policy and political-military affairs at the Israeli Defense Ministry and a top intelligence officer who conducted Israel’s sensitive ties with Jordan for decades, told Al-Monitor this week that if he were Netanyahu, he would announce that he was immediately “abandoning this horrible annexation plan.” Gilad, a security hawk not known for his leftist political leanings, added that Israel should focus instead on its greatest threat, Iran. “We have a very convenient climate in the West Bank in terms of security. We have defeated terrorism, Jordan provides us with a strategic depth all the way to Iraq, and instead we want to restore the Palestinian issue to center stage. Why do we need this? After all, the army will remain deployed in the Jordan Valley and along the Jordan River in any case. Why go on with this declarative Zionism? Practical Zionism is preferable.”

Netanyahu will have to decide, soon. As he weighs his options, he is undoubtedly taking note of the warning issued this week through Al-Monitor by the United Arab Emirates' ambassador to Washington, Yousef Al-Otaiba, that annexation would make the region “unstable.” The Emirates are the keystone in a clandestine love affair Netanyahu has been conducting with the Gulf States for years and he must concede there could be something to their warning.

Netanyahu’s main problem is that he cannot read Washington’s true intentions at this point, especially not those of the White House — perhaps because given the current chaos, no one there knows which way Trump will go once the deadline arrives and Israel asks for a go-ahead to carry out annexation. According to several sources very close to Netanyahu, his friends at the White House have not been returning his calls over the past two weeks. A senior diplomatic source familiar with these contacts told Al-Monitor that Kushner and his wife, Ivanka Trump, are not wild about the annexation idea, to put it mildly, given the current state of play. On the other hand, Trump’s influential ambassador to Israel, David Friedman, has no such qualms as he continues to hold intense discussions with the settlers and advocate annexation. Netanyahu will be the one making the final decision, but he would need to receive beforehand clear American guidance.

“Maybe Netanyahu would rather have Trump push aside the whole issue and pull his chestnuts out of the fire for him,” a senior right-wing government minister told Al-Monitor on condition of anonymity. “He could always say that he tried, he wanted to, but circumstances made the annexation impossible.” An unequivocal statement by presidential candidate Joe Biden warning Netanyahu against confronting the United States with a fait accompli just months before the elections would also help Netanyahu recalibrate. “But for that to happen,” one of his associates said on condition of anonymity, “he has to want to change course. Right now, he himself does not know exactly what he wants.”