Netanyahu edges back to reality as support for annexation wanes

After warnings by the US administration that he needs to have Blue and White on board with his plan, Prime Minister Benjamin Netanyahu may settle for a limited, symbolic annexation. 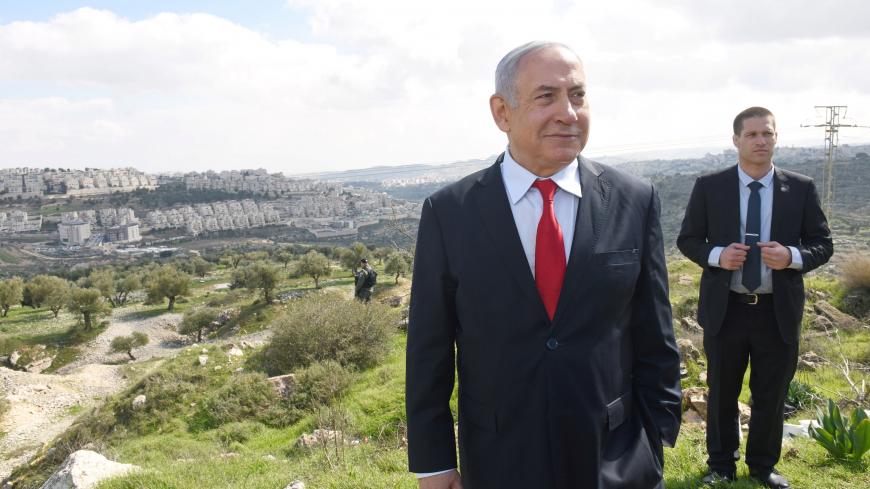 Israeli Prime Minister Benjamin Netanyahu stands at a viewpoint of the Israeli settlement of Har Homa, located in an area of the Israeli-occupied West Bank, that Israel annexed to Jerusalem after the region's capture in the 1967 Middle East war, Feb. 20, 2020. - Debbie Hill/REUTERS

Prime Minister Benjamin Netanyahu told the Likud faction on June 15 that he wanted to bring an annexation plan for approval in the near future, but the map still isn’t ready. The ministers took the declaration silently. No one mentioned that only recently, a confident Netanyahu had proclaimed that there have been no changes to the annexation program, that the target date of July 1 remains set as determined in the coalition agreement between Likud and Blue and White.

Netanyahu is the supreme leader. If he wills it, he can shelve the same program that turned him into a great leader of the right wing six months ago.

Netanyahu ostensibly has the Knesset majority he needs for full annexation. The Yamina faction, and evidently Avigdor Liberman’s Yisrael Beiteinu as well, will support the initiative from the outside. So what gave him cold feet? Why is he allowing the annexation drive to cool?

One doesn’t have to be an expert on Netanyahu and his map of interests to realize that not much will happen on July 1. Two weeks out, Netanyahu is preparing to explain the delay on his plan to annex all West Bank and Jordan Valley settlements. He's also already identifying who is to blame for the delay: Defense Minister Benny Gantz and Foreign Minister Gabi Ashkenazi.

“We don't know about Blue and White, that's a good question," said Netanyahu. The prime minister added that maybe the party is in favor of annexing the Jordan Valley and the settlement blocs, playing dumb for his faction.

Those words are far from the truth. Netanyahu is very familiar with Gantz and Ashkenazi's stances: Both oppose a sweeping annexation. They will only support a limited program to be carried with unqualified American support and understandings in place with Arab countries.

Gantz and Ashkenazi have presented their red lines to Netanyahu on many occasions. The only one behaving without transparency is Netanyahu himself. The prime minister has still not revealed his maps and intentions to his partners. He will explain to the ideological right why things aren’t going the way he’d promised them by casting the blame on others. The situation also arguably suits the heads of Blue and White, who can use this instance to prove to their political base that they wield influence over Netanyahu’s government and have the ability to tone him down. It's a win-win situation.

So what’s really going on?

As the days go by, the picture becomes clearer. Netanyahu has no intention of bringing the entire US program for authorization by the government and the Knesset, only annexation — and a limited one at best. Conventional wisdom holds that it will include the Etzion settlement bloc, a collection of localities that would remain under Israeli sovereignty under any peace agreement.

In addition, Netanyahu is now saying that he has no intention of going against the White House. He said so clearly in a meeting with former high-placed officials in the defense system who support annexation and are identified with the right. In the June 15 meeting, he gave them some behind-the-scenes information and told them that the American administration demands that annexation take place only with the agreement of Blue and White. It was the express request of the White House not to move unilaterally.

On June 14, Emirati Ambassador to the United States Yousef al-Otaiba took the unusual step of publishing an op-ed in Hebrew in the Israeli daily Yedioth Ahronoth, in which he warned against annexing settlements and territories in the West Bank. Otaiba enjoys excellent relations with US President Donald Trump and his son-in-law and adviser Jared Kushner, even attending the “deal of the century” unveiling in the White House last January.

Thus, Netanyahu cannot simply ignore Otaiba, a moderate figure who views relations with Israel as a security asset, and his message that annexation will negatively affect relations between Israel and his country as well as other Arab states. Netanyahu has prided himself in recent years on his excellent relations with pragmatic Arab states such as Saudi Arabia. It was a strong bargaining chip over his opponents and he won’t want to lose it. In light of these developments, even high-level ministers in the Likud are admitting that Netanyahu won’t carry out a full annexation.

There’s another reason: Recent surveys are showing that the Israeli public is more concerned about economic problems than annexation. Hundreds of thousands of Israelis are still unemployed, and tens of thousands of businesses are collapsing.

A survey aired June 8 on Channel 12 included the question, “What is the most important mission of the new government?” An absolute majority of respondents agreed that the economic crisis is of top priority. Even the fight against the coronavirus took second place, and only small percentages of the public pointed to annexation and the struggle against Iran as most important.

Netanyahu has his ear to public opinion. He understands that nowadays Israelis are wrapped up in economic problems, and they won’t forgive him if a wave of violence erupts on the heels of annexation. The prime minister knows that his legal and political survival is on the line.

Netanyahu is a sophisticated political animal and his conclusion is clearly to limit himself to a symbolic annexation. He views his positive relations with the Trump administration as a national and personal asset. Netanyahu has gone out of his way to express his thanks to the president, for example calling Trump on his 74th birthday. The prime minister also called Secretary of State Mike Pompeo on Monday night to thank him for taking Israel’s side against the International Criminal Court.

For most of his years as prime minister, Netanyahu dealt with Democratic presidents who opposed him on diplomatic issues. He really needs to keep the door to the White House open.