The Israel-UAE deal crushes the center-left’s belief that no Arab state will make peace with Israel without the resolution of the Israeli-Palestinian conflict and the establishment of a Palestinian state. 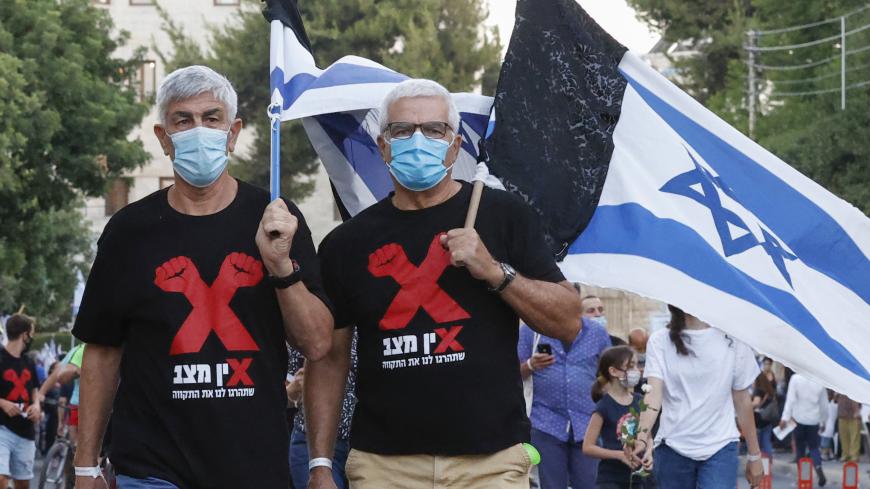 Prime Minister Benjamin Netanyahu’s historic Aug. 13 announcement of a peace agreement between Israel and the United Arab Emirates caught Israel’s political arena by surprise. No one, not even senior members of the security cabinet including Defense Minister Benny Gantz and Foreign Minister Gabi Ashkenazi, had any idea that Netanyahu was secretly cooking up the exciting diplomatic breakthrough.

Gantz and Ashkenazi, the former military chiefs and current heads of the Blue and White Party, swallowed the indignity and hailed the deal, even ignoring Netanyahu’s broad hints that he had not clued them in because he feared they would blab. The center-left opposition, meanwhile, reacted with confusion and embarrassment as the news crushed its long-held belief that no Arab state would make peace with Israel absent resolution of the Israeli-Palestinian conflict and establishment of a Palestinian state.

The left, which has consistently shrunk over the past two decades, is at a loss for words. Its most cherished wish is peace with the Arab world, but the credit for the achievement is going to Netanyahu, leader of the political right and a despised and demonized figure, making it hard for them to appreciate the breakthrough.

The congratulations by Netanyahu’s critics were hesitant and half-hearted, and underscored his having to give up his annexation plans for the West Bank as quid pro quo for the deal. Given that the center-left had fought hard to prevent the planned annexation, it was a strange reaction, suggesting the loss of its ideological compass. Not only had the opposition failed to adjust to changing regional circumstances, it has endured a harsh blow with Netanyahu’s breaching of the peace camp’s domain.

The response by the Israeli peace movement Peace Now was particularly bizarre. Shortly after news of the agreement broke, it tweeted, “UAE-Israel diplomatic breakthrough — Fantastic news! Peace is possible if it is put on the agenda now. This is the true meaning of our name: Peace Now. It also proves what can happen when Israel forgoes absurd annexation machinations."

Belittling of the diplomatic achievement continued later on, when Peace Now tweeted a photo of a placard from ongoing anti-Netanyahu protests: “Even if you make peace with Iran, we will keep coming here, but go for it,” underscoring the center-left’s inability to overcome partisan and personal enmity.

When the shock wore off, the reactions on the left grew more contorted as it strove to downplay the accomplishment. Social media posts explained that Netanyahu was forced to shelve the annexation plan, that the agreement with the UAE was merely a matter of bringing into the open a longstanding covert relationship and that Netanyahu was once again trying to evade the long arm of the law.

The polls did not show a surge for Netanyahu — in one, he lost a Knesset seat compared to the previous poll and the other gave him three more seats. Nonetheless, the results were among his best in recent weeks. They indicated that the right-wing block he leads could easily cross the threshold he needs to form a government of right-wing and ultra-Orthodox parties, without the center or left. One poll put the number of seats in the pro-Netanyahu bloc at 63 of 120 and the other at 65. It means that all the support Netanyahu and his Likud have lost over the handling of the coronavirus crisis have remained within the bloc but have shifted to the Yamina Party under Knesset member Naftali Bennett. Bennett’s views are much more ideologically extreme than Netanyahu’s, and he had been urging the prime minister to move ahead with annexation even without White House approval.

The map emerging from the polls is grim for the center-left, which continues to plunge. The polls also indicate that opposition to Netanyahu, as reflected in demonstrations outside his official and private residences, has failed to drum up additional support and is having the opposite effect of uniting right-wing forces. It is a resounding failure to challenge Netanyahu with an alternative at one of his toughest moments: Public disappointment with his government’s handling of the pandemic and the start of his corruption trial. The chair of the centrist Yesh Atid Party, Yair Lapid, identified as the main electoral counterweight to Netanyahu, has been unable to change the public’s perception of his suitability for the premiership, and Bennett is overtaking him in the polls on this issue.

Yet another “victim” of the peace agreement with the Emirates is the Arab Joint List, support for which declines from its current 15 Knesset seats and consistent polling level to 12 seats, according to Channel 13. Pollsters explain that the loss of the alliance’s popularity stems from the enthusiastic backing of Israel’s Arab community for the deal that Netanyahu engineered, even as party leaders express their reservations.

Netanyahu continues to milk the news. On Aug. 16, he granted interviews only to right-wing media outlets, including Fox News, and to journalists known to favor him. He boasted of achieving a peace agreement without evacuating a single Jewish settlement, even as developments with the UAE were moving ahead. Also on Aug. 16, the Emirates lifted its block on calls to and from Israel and on access to Israeli websites. The direct phone link was inaugurated by Ashkenazi and his counterpart in the UAE Foreign Ministry, Sheikh Abdullah bin Zayed Al Nahyan.

Netanyahu's opponents' minimizing of his breakthrough, its potential economic bonanza, its effect on the regional climate and on the expectation that other Gulf states will follow the UAE suggest that the public has not grasped the development and its impacts. It's unfortunate, because the political left is an important factor in the state’s political checks and balances.