Israel has plenty of professional diplomats specialized in the Arab world, yet Prime Minister Benjamin Netanyahu is relying on Mossad chief Yossi Cohen to advance ties with Gulf states. 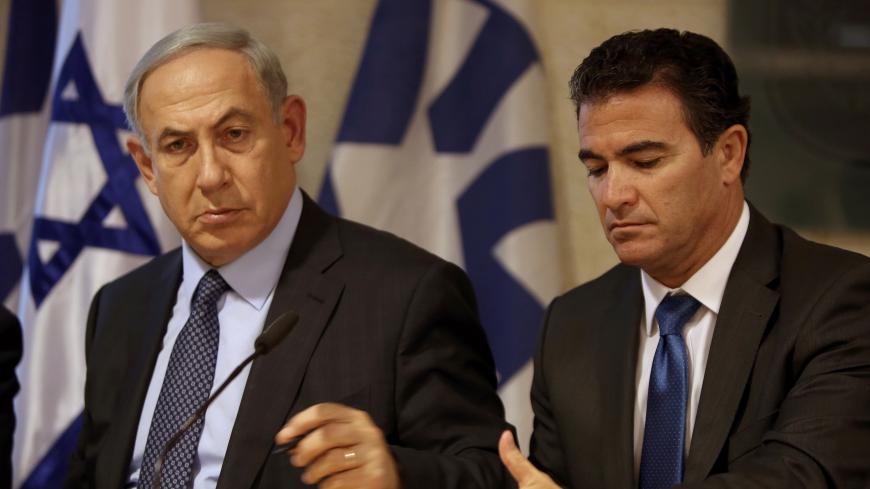 A file picture taken at the Israeli Foreign Ministry on Oct. 15, 2015, shows Prime Minister Benjamin Netanyahu (L) sitting next to Yossi Cohen, who Netanyahu named as the 12th head of the Mossad intelligence agency on Dec. 7, 2015. - GALI TIBBON/AFP via Getty Images

Prime Minister Benjamin Netanyahu announced a historic agreement with the United Arab Emirates in an Aug. 13 press conference. He said that delegations from the two countries will meet in the coming weeks to finalize the details. According to reports on Aug. 14, an Israeli official delegation will travel to the UAE as early as next week to meet with the country’s top leadership. A diplomatic source told Al-Monitor that the composition of the team has yet to be finalized. Channel 12 reported that a senior Israeli official would lead the negotiating team, while Ynet specified it would be Mossad chief Yossi Cohen.

Yesterday, at the televised press conference, Netanyahu acknowledged keeping the negotiations secret and not sharing the news even with his Blue and White partners until the last minute. Neither Foreign Minister Gabi Ashkenazi nor Defense Minister Benny Gantz were privy to the contacts with the UAE. Reports that came out later last night revealed that Cohen and Israel’s ambassador to the United States, Ron Dermer, had worked behind the scenes. Cohen had apparently traveled to the UAE on several occasions to advance the agreement, while Dermer was in constant contact with UAE Ambassador to Washington Yousef Al-Otaiba. This morning, Netanyahu tweeted, "I am very grateful to Israel’s ambassador to the United States, @AmbDermer, for helping bring the historic treaty with the UAE."

In October 2018, Netanyahu made a first, historic visit to Muscat, capital of Oman. Cohen had served as a go-between to finalize the visit by Netanyahu, who at the time was also serving as foreign minister. Israel has now an assertive foreign minister who is very familiar with the Arab world and has served in multiple sensitive security positions — definitely no one likely to leak or ruin a deal with a Gulf state. Netanyahu's explanation for excluding Ashkenazi and Gantz from these developments indicates that the prime minister wanted to keep all the glory for himself.

Netanyahu said at the press conference that other Arab countries are expected to follow in the footsteps of the UAE. So who is next in line? Israel’s Kan public broadcaster reported this morning that Bahrain is expected to be the next country to establish official ties with Israel. An unidentified US official told Al Quds newspaper that it was just "a matter of time" before Bahrain and Oman followed suit and established ties with Israel. Indeed, Oman said this morning it backed the normalization of ties between the neighboring UAE and Israel.

Israel’s Foreign Ministry has plenty of professional diplomats who speak Arabic and specialize in the Arab world. For several years now, Israel has had a diplomat stationed in Abu Dhabi as its representative to the International Renewable Energy Agency. Diplomats who served in Israeli missions in Qatar and in Morocco in the short period after the 1993 Oslo Accords are still working at the ministry. Netanyahu has no reason not to task any of them with advancing ties with the UAE, Bahrain, Oman or other Gulf States.