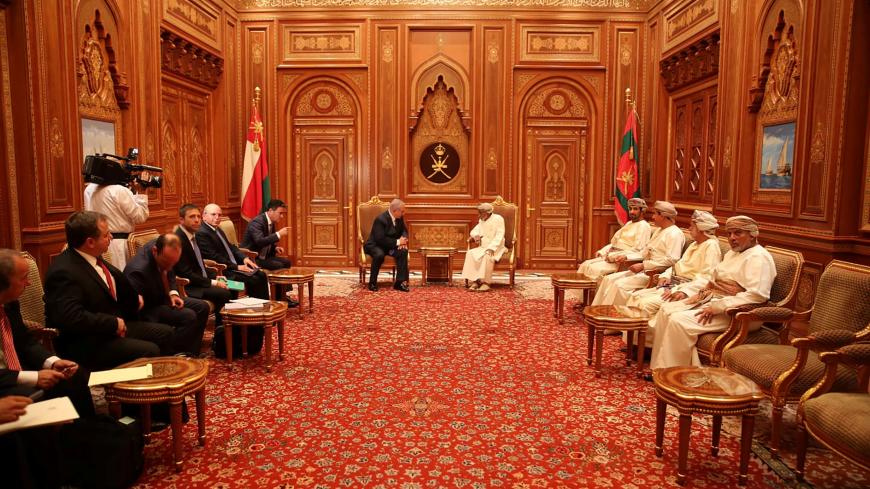 A senior Israeli defense official recently likened the decision by several Muslim states to “come out” of their closeted clandestine ties with Israel to the result of a slow cooking process. It was probably the longest such process in history. At the end of October, an impressive stew emerged from the oven with the historic, public and highly publicized Oct. 26 visit by Prime Minister Benjamin Netanyahu and his wife Sara to Muscat, capital of Oman. Sultan Qaboos bin Said hosted the Netanyahu retinue in a manner fit for kings, and in contrast to the instinctive reflex displayed on such occasions, the Omanis reported the visit widely and even boasted of it rather than playing it down.

“It’s been more than a week since that public visit,” the Israeli defense official told Al-Monitor, “and nothing [untoward] has happened. Except for Iran, not a single Arab or Muslim state condemned Oman or attacked it for hosting [Netanyahu]. Behind the scenes, the exact opposite has happened. This will project onto other states, which will understand that normalizing ties with Israel offers many more advantages than drawbacks these days.”

Following the Israeli trip to Oman, the sultan sent two emissaries — Salem bin Habib al-Omeiri, followed by Omani Foreign Minister Yusuf bin Alawi — on short visits to Palestinian Authority head Mahmoud Abbas in the West Bank city of Ramallah. According to the London-based Asharq al-Awsat Arabic-language newspaper, Oman is working to renew the peace process between Israel and the Palestinians based on a long-gestating US peace plan that President Donald Trump has dubbed the “ultimate deal.” Nonetheless, a senior Israeli source, who was privy to the secret preparations for the Oman visit, dampened expectations of the results. “We’re not talking about Oman becoming the new Israeli-Palestinian mediator,” he told Al-Monitor. “The Omanis know their weight in this boxing tournament and are not trying to get ahead of themselves. They are trying to help. Oman has positioned itself in recent years as the Switzerland of the Middle East, trying its hand at mediating and bridging all sorts of conflicts, out of the region too, and Israel is happy to have such help.”

The man behind the blooming Israeli diplomacy with the Muslim world is Yossi Cohen, director of Israel’s Mossad, who accompanied Netanyahu to Oman. Cohen has been shuttling at a frenetic pace between regional capitals, deepening clandestine cooperation between Israel and countries with which it does not have diplomatic relations, and maintaining the regional alliance between Israel and the Sunni states, an alliance forged from deep concern on the part of Saudi Arabia and other Sunni states about Iran’s expansion. Within Israel’s corridors of power, Cohen, with his impressive Arabic and English language skills and well-honed political instincts, is dubbed “the de facto foreign minister.” Visits such as the one to Oman and the recent secret visit by an Israeli delegation to largely Muslim Chad, as well as the establishment of relations with Azerbaijan (where Defense Minister Avigdor Liberman visited in September) are only the tip of a giant iceberg taking shape under the surface of the water.

The US administration most probably was informed of the Oman visit in advance, and the US ambassador there was aware of the event. Iran has already protested the visit, but no one in Jerusalem or Muscat is overly concerned. “The Iranians know they owe Oman the agreement on their nuclear program with world powers,” a senior security official told Al-Monitor, speaking on condition of anonymity. “Iran cannot afford to have another front in addition to all the other burning fronts it has taken on. All in all, the visit was accepted in the Middle East with equanimity, signaling to all that ties with Israel these days are more of an asset than a burden.”

This honeymoon notwithstanding, Israel’s leadership understands that a peace process, or at least negotiations and some form of normalization with the Palestinians, could encourage and accelerate the normalization process with the Arab world. That is probably why Netanyahu recently dispatched the head of the Israel Security Agency, Nadav Argaman, to meet with Abbas in an attempt to salvage what is left of the relationship between Jerusalem and Ramallah.

That was also likely the reason the Omani envoys flew to meet with Abbas. Along with attempts to reach a long-term cease-fire arrangement with Hamas in the Gaza Strip, Israel is trying to ease tensions with Abbas so it can continue enjoying the budding regional fruit. Behind the scenes, tension is mounting ahead of the expected unveiling of the Trump peace plan, probably after next year’s elections in Israel. Netanyahu’s top ministers know already that the plan will include US recognition of East Jerusalem as the capital of a future Palestinian state. This will be a bitter pill to swallow for Netanyahu and his current right-wing government, which is why attempts are underway to stall the plan until after the elections. Now, through Oman and other mediators, Israel is trying to placate Abbas and restore calm on the front with Ramallah, and at the same time boost the regional momentum.

Netanyahu and Sultan Qaboos hit it off right away. The sultan was educated in Scotland, his English is excellent and communication between the two leaders flowed. In a briefing to Israeli reporters, Netanyahu spoke about his host with shining eyes. He was obviously in love. “He has the soul of an artist; he is exceptionally educated and impressive. We found out that we read the same books,” Netanyahu said. Asked what he had learned from the sultan, Netanyahu chose to keep that to himself, saying he had learned two things that he would reveal in his memoirs. Asked whether he was aware of the fact that the sultan had deposed his father and taken over the reins of power, Netanyahu answered, “That’s true, but he didn’t him put him in jail.”

Several historic facts fell by the wayside under the clouds of euphoria generated by the Netanyahu visit. Were it not for the signing of the 1993 Oslo Accord on Israeli-Palestinian peace, the relationship with Oman would not have been born. The first Israeli prime minister to visit Oman was the late Yitzhak Rabin, followed in 1996 by Shimon Peres who became prime minister in the wake of the Rabin assassination in November 1995. Oman’s military band awaited Peres on the airport runway and played Israel’s national anthem, "Hatikva." Peres, unlike Netanyahu, was permitted to bring along journalists (including the undersigned). Those days seemed to augur the advent of a “New Middle East,” a vision that soon collapsed in the fire and smoke of the second Palestinian intifada that broke out in late 2000. Netanyahu is now trying to resurrect that vision, but without a peace process. He may just succeed due to the regional Shiite threat.