The visit of Prime Minister Benjamin Netanyahu to Oman is Sultan Qaboos’ way of signaling to Israelis what peace could look like, should they end the occupation of the Palestinians. 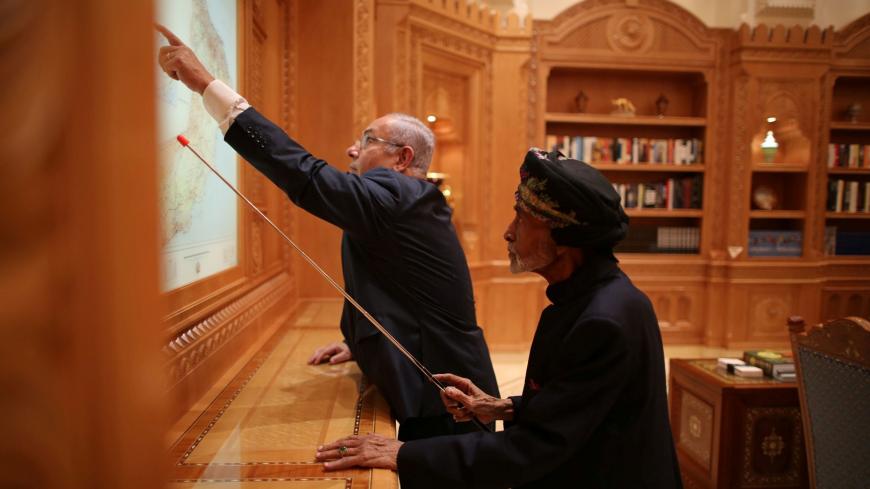 Abu Dhabi authorized last month the participation of the Israeli Judoka team at the Grand Slam competition there. When Israeli Judoka Sagi Muki won a gold medal Oct. 28, the Israeli national anthem, "Hatikva," was played — for the first time in the United Arab Emirates (UAE). Culture Minister Miri Regev, who accompanied the Israeli Judo team, was photographed fighting back tears of joy on the occasion.

Regev is known for her controversial, nationalist positions, drawing fire from the press. Rarely, if ever, has Regev enjoyed such expansive positive coverage as she did in Abu Dhabi. Sports commentator Itamar Katzir, writing in Haaretz, was effusive in his praise. Katzir noted that Regev had insisted in the past that Israelis would not compete in Tunisia or Abu Dhabi or any Arab state unless the Israeli anthem could be played there. Promoting her to the rank of “a diplomatic personality of the first order,” Katzir continued, “(Judoka Sagi) Muki came away with a gold medal, but Regev came away with the crown of an ambassador, of a foreign minister, and perhaps, most importantly, she became the talk of the day — this time in a favorable context.”

What makes the public participation of a United Nations member state in an official international competition a diplomatic achievement of that state? Why did the culture minister deserve such praise and glory for opposing the discrimination of Israel’s symbols of statehood as if it were the last of the pariah states begging for its right to respectful representation? Should it not be obvious that the International Judo Federation cannot sponsor a tournament in a country where the government mixes politics with sports? Would the government of the UAE have banned the playing of Iran’s anthem or the flying of the Saudi flag — both countries that would have a hard time defeating Israel in the Middle Eastern human rights championships?

When Qatar was chosen to host the 2022 World Cup soccer tournament, there was no question that it would let in the teams of all the soccer federation’s member states and respect their national symbols, including Israel’s. (It should, however, be noted, that the Israeli national soccer team has never made it to the World Cup. So the chances of Regev going to Qatar to sing the national anthem are about the same as her participating in an event organized by Breaking the Silence, the anti-occupation nongovernmental organization.)

It would be more reasonable to wonder why international sports associations for years allowed sports events to take place in countries that boycotted Israeli competitors or concealed their presence. For example, the Association of Tennis Professionals held its annual tournament in Abu Dhabi in 2009 despite the Emirates’ refusal to grant Israeli player Shahar Peer an entry visa.

Along with the public exclusion of Israeli players and competitors, close ties have been developing under the surface between the Gulf states and Israel’s defense industries and Israeli business people. The Gulf states' major coming out of the closet occurred following the 1991 Madrid Peace Conference with the participation of senior Arab and Israeli officials. The Israeli-Palestinian Oslo Accord signed two years later, and the progress that ensued in diplomatic negotiations between the sides, paved the way for the opening of Israeli diplomatic missions — from Oman and Dubai in the Persian Gulf to Morocco and Tunisia in North Africa.

Retired diplomat Oded Ben-Chaim, who served as the first head of the Israeli mission to Oman from 1996 to 2000, told Al-Monitor this week that he did not detect any special concern over the Palestinian issue in his talks at the time with Omani leaders, to put it mildly. “They complained to me that the opening of the Israeli office is forcing them to allow the Palestinians to open a similar representation,” he said. Not only that. In November 1995, Israel barred PLO leader Yasser Arafat from attending the funeral of slain Israeli Prime Minister Yitzhak Rabin. That did not prevent Oman’s Foreign Minister Yusuf bin Alawi from joining the other international mourners in Israel.

Oman was among the states that supported the Arab League’s 2002 peace initiative, which offers to normalize diplomatic ties with Israel on condition that it ends its occupation of Palestinian lands and agrees to a just and agreed-upon resolution of the Palestinian refugee problem. However, Prime Minister Benjamin Netanyahu — who visited Oman and met with Sultan Qaboos bin Said on Oct. 26 — and Regev both exploited their trips for a different kind of message. For them, their visits prove that there was no basis to left-wing claims that the occupation and Israeli settlements hinder normalization of ties with the Arab world.

At his Sept. 27 address to the UN General Assembly, Netanyahu thanked Iran indirectly for the fact that its threats against its neighbors were bringing them closer to Israel. He forgot to mention the important role played by Qaboos in facilitating negotiations between Iran and the Obama administration for the nuclear agreement — an agreement Netanyahu detests.

Did Oman, a close Iranian ally, really treat Netanyahu — the nemesis of Tehran and the Palestinians — to a free lunch? Did they accept him for a much-mediatized visit, while abandoning the Palestinians?

Professor Mati Steinberg, a Middle East scholar, pointed out that the Omani foreign minister was dispatched to the headquarters of the Palestinian Authority in Ramallah five days after Netanyahu’s Oman visit in order to report to Palestinian President Mahmoud Abbas about the sultan’s talks with Netanyahu. Speaking with Al-Monitor, Steinberg, who served as an adviser on Palestinian affairs to four heads of Israel’s General Security Service, also noted that a day after Netanyahu’s meeting with the sultan, Oman issued a statement underlining its support for the Arab Peace Initiative. Steinberg also pointed out that the PA had refrained from attacking Oman and Abu Dhabi for hosting the Israeli leaders.

“It seems to me that Abbas is letting them do their thing as long as they don’t deviate from the road map of the peace initiative,” Steinberg said. He views this stance as another example of the proactive attitude inherent in the initiative and an expression of Palestinian self-confidence. Although the Palestinians are unable to achieve their goals, they have the power to scuttle any diplomatic process — for example, US President Donald Trump’s original “ultimate deal” between Israel and the Palestinians.

Steinberg noted that there have been instances in the past when the Arabs signaled willingness to normalize ties with Israel in order to achieve a resolution of the Palestinian problem. One such example was the unusual Washington Post article written in 2009 by Bahraini leader Salman bin Hamad Al Khalifa. “Essentially, we have not done a good enough job demonstrating to Israelis how our initiative can form part of a peace between equals in a troubled land holy to three great faiths,” he wrote, explaining that a true, sustainable peace requires reconciliation on a personal level, including a direct appeal to the Israeli public laying out the advantages of peace.

Such an appeal was issued in the form of the invitation of Israel’s prime minister to the palace in Oman and the playing of the Israeli anthem in Abu Dhabi in the presence of Israel’s minister of culture. Both events showed the Israelis what normalization of the ties and fruits of peace could look like. However, it takes at least two to make peace. The other side is not Oman, Abu Dhabi or Bahrain. It is not even Saudi Arabia, which assassinated a journalist. (Israel carefully avoided condemning that act.) The other side — the Palestinian people — lives under occupation across the fence.