Israeli politicians love to be seen alongside successful athletes and frequently use athletic success for patriotic-nationalist purposes. 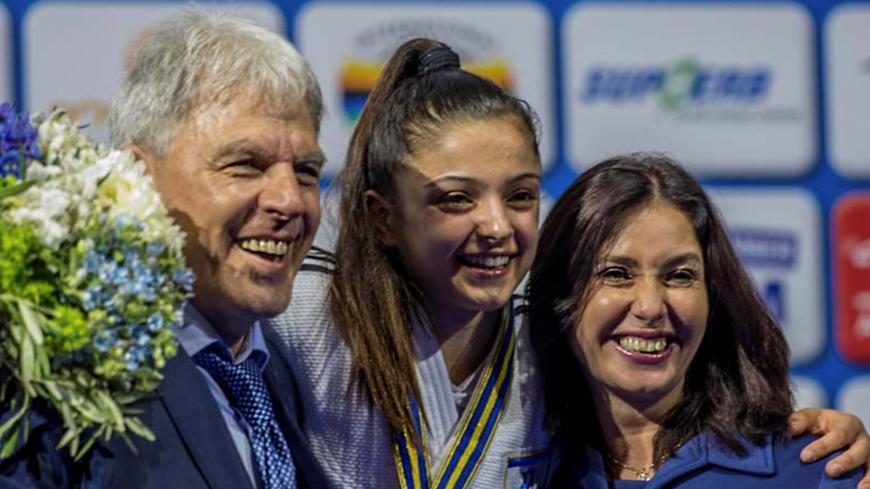 In the State of Israel, where any athletic achievement elevates the mood sky-high and calls for parties in the streets (better with fountains) and any sports failure is almost always equated with military defeat, the connection of politics and sports seems completely natural. Politicians love to be seen alongside successful athletes and frequently use athletic success for patriotic-nationalist purposes. In this realm, Minister of Sports Miri Regev has accomplished a great deal this past year.

In November 2017, we reported here at Al-Monitor on the refusal of Abu Dhabi, host of an international judo grand slam, to fly the Israeli flag among the flags of participating nations and to play the Israeli national anthem, Hatikvah, when the Israeli judoka Tal Flicker won the gold medal. Regev announced then that she would wage an international battle against such phenomena, and this pressure has indeed made a difference.

This past July, the World Judo Federation announced the cancelation of competitions in the United Arab Emirates (UAE) and Tunisia, two Arab nations that created difficulties regarding Israel’s flag and national anthem. In response, the UAE changed its policy. This past October, Regev arrived in Abu Dhabi as the head of the Israeli delegation of the Judo Association and celebrated her victory. The Israeli flag flew on the masts and on competitors’ outfits. Most importantly, the Israeli anthem was played twice when Sagi Muki and Peter Paltchik won gold medals.

Regev herself participated in Muki’s medal ceremony, and she shed tears as the national anthem played. It was notable that the hosts from Abu Dhabi showed her especially respectful hospitality, including a tour of sites in the principality, which was well covered by the media.

Prime Minister Benjamin Netanyahu called Muki after his gold medal win and told him: “It is not only your personal achievement and the Jewish achievement of Israeli sports but also the fact that the anthem was being played in Abu Dhabi. You know that I was recently in the area, not far away. Sagi, you are also contributing to Israel's diplomatic effort in the Arab world.”

On Nov. 8, Netanyahu hosted the two winners at his office. On this occasion, Regev announced that competitors from Arab countries with which Israel does not have diplomatic relations would also participate in a judo tournament that will take place in Israel in January 2019.

A senior source in the Israeli Foreign Ministry told Al-Monitor that this is all tied to a thaw in relations between Israel and Persian Gulf states, which has also been seen in Netanyahu’s surprise visit to Oman as the guest of Sultan Qaboos bin Said, a visit that garnered much media coverage and prominence in that principality and in the Gulf states in general.

According to the source, Abu Dhabi was ready to give up hosting the recent championship, but it changed its policy in light of the warming relations between Saudi Arabia and Israel. It’s no coincidence, he says, that Netanyahu was the only world leader who defended Saudi Arabia to the American administration following the murder of journalist Jamal Khashoggi.

In his telephone conversation with judoka Muki, Netanyahu noted, as we mentioned, the “Jewish achievement of Israeli sports" — this is an interesting point. Alongside the success of the judo team, Israeli Arab Amir Assad won the European kickboxing championship Oct. 20. While Regev congratulated him in a press release, he did not receive a phone call from Netanyahu like the judo champions.

Assad was not upset about that. “The head of my local authority has not yet come to congratulate me,” he told Al-Monitor. But Arab human rights advocates such as Afif Abu Much were angry. “What is he [Netanyahu] scared of?” he tweeted, adding, “That he’d be seen congratulating an Arab citizen? Or is that the Nationality Law?”

The athletic success of Arab-Israelis is especially prominent in Israel’s national soccer team, which has recently achieved victories over Albania and Scotland in the European League. Arab players were prominent in those games — such as Dia Saba — who played offense against Albania — as well as Taleb Tawatha and Munas Dabbur. Member of Knesset Ahmad Tibi of the predominantly Arab unified Joint List commented on their success with a sardonic tweet, “We’ve got Arabs, we’ve got goals” — a parody of the right-wing extremist slogan, “No Arabs, no terrorist attacks.”

In many nations around the world, the most prominent integration of minorities is in the realm of sports, and one of the most impressive examples is France’s World Cup champion national soccer team. Many of its stars are sons of immigrants or minorities. In Israel, several Jews play on the highest-ranked minority team, Bnei Sakhnin, which plays in the elite league. At the same time, many Arabs play on teams representing Jewish towns. Beitar Jerusalem is the exception since many of its fans are right-wingers — some even on the radical right — and its management has not succeeded in overcoming the fans’ opposition to include a Muslim player on its team. This issue was documented in the film “Forever Pure” by director Maya Zinstein. The film won an Emmy Award in the United States last October for documentary films dealing with politics and government.

In the meantime, the battle against the boycott of Israeli athletes continues. Israel’s women’s water polo team played against Spain at the Europe Cup Nov. 6, but not before host city Molins de Rei accepted the demands of the Boycott, Divestment, Sanctions movement and announced that it would not hold the game in town. The Spanish association asked to move the game to a closed pool with no audience, flags or anthems, but the Israeli team refused. An Israeli appeal to the world swimming association caused the Spaniards to change their minds, and the game was held with all national symbols and audience participation. Chairman of the Israeli Water Polo Association Revital Gluska Cohen told Al-Monitor that the battle was one of principle. “The team represents Israel, and the flag and anthem are expressions of that representation,” she explained.