During the years of AKP rule, Turkey’s sports scene has seen an avalanche of doping scandals and an increase in “imported” athletes. 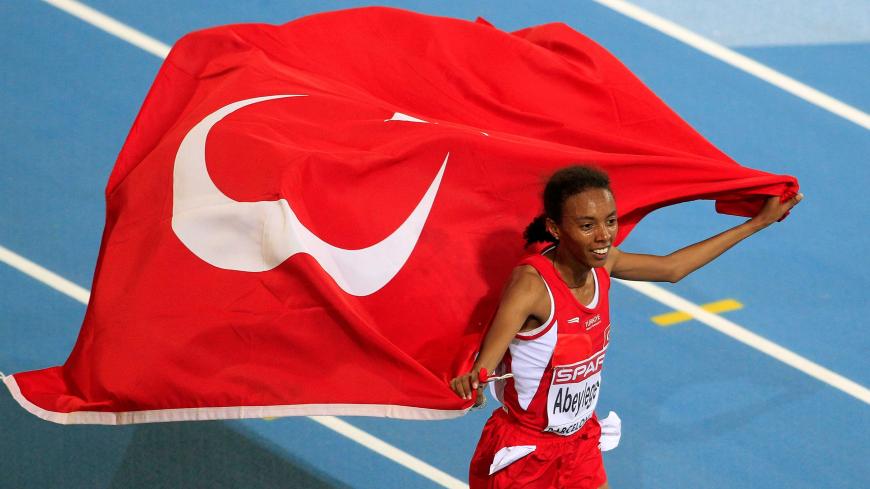 Elvan Abeylegesse of Turkey celebrates after winning the women's 10,000-meter final at the European Athletics Championships in Barcelona, Spain, July 28, 2010.

ANKARA, Turkey — Weightlifting legend Naim Suleymanoglu, who passed away in November at the age of 50 after a serious illness, was Turkey’s top “imported” athlete who elevated Turkish weightlifting to a world-class status. Born in Bulgaria as a member of the country’s Turkish minority, Suleymanoglu defected to Turkey during the 1986 world weightlifting championships in Melbourne, after which he was naturalized and represented Turkey at international tournaments for years. Nicknamed “The Pocket Hercules,” Suleymanoglu won three consecutive Olympic titles and dozens of gold medals from world and European championships, breaking 46 world records during his career.

Boosted by Suleymanoglu’s success, Turkish weightlifting flourished, producing a generation of champions, both men and women. Among Turkey’s “imported” athletes, Suleymanoglu was a rare role model.

In recent years, however, sports in Turkey have been on the decline, almost in all branches. Weightlifting and athletics, especially, have been mired in doping scandals, resulting in competition bans and medal-stripping for Turkish athletes. In September, Turkey was among nine countries that the International Weightlifting Federation suspended from competition for a year due to rampant doping violations.

Since the Justice and Development Party (AKP) came to power more than 15 years ago, Turkey has invested significantly in sports facilities, with Istanbul making three unsuccessful bids to host the Olympics. The last time, in 2013, Istanbul lost out to Tokyo in the race to host the 2020 Olympics. Many saw Istanbul’s defeat as the fallout of the doping scandals as well as Turkey’s worsening international image after a ferocious crackdown on mass anti-government protests that had rattled the country months before the vote.

When the AKP came to power in November 2002, Turkey’s national soccer team was a proud bronze medalist from the World Cup just several months before. In another memorable achievement, the national basketball team had come in second at the European championship in 2001, reaching the finals for the first time in its history. In the years of AKP rule, however, Turkey never managed to repeat those achievements, not only in soccer and basketball but in other disciplines as well.

The doping scandals, meanwhile, seemed to proliferate. At the 2013 Mediterranean Games, which Turkey hosted, many Turkish athletes could not make it to their event, banned over doping even before the games had started. Last year, top Turkish runners, among them the Ethiopian-born Elvan Abeylegesse, were stripped of Olympic and world championship medals, again over doping.

The Youth and Sports Ministry is now promoting a policy of “zero tolerance to doping.” During the parliamentary budget debates in December, Youth and Sports Minister Osman Askin Bak fought back criticism over doping violations and “imported” athletes. He spoke in favor of decreasing the number of foreign athletes, and on the issue of doping, he said, “The doping problem is the cancer of sports. In 2013, the number of samples [that tested positive for doping] was 176; today it has come down to 21.”

Under the AKP, Turkey has seen a tenfold increase in the number of licensed athletes. The figure today stands at more than 8.1 million, up from about 800,000 in 2002. Yet this has failed to translate into any notable increase in success in the international sports arena.

The statistics show that only one-third of Turkey’s young people are interested in sports, but there is a thirst for international success, which has fueled the naturalization of foreign athletes. At the 2016 Rio Olympics, for instance, 29 of the 103 athletes representing Turkey were naturalized foreigners, who won three of the country’s eight medals at the games.

At the World Athletics Championship in August, Ramil Guliyev, who had transferred nationality from Azerbaijan, won the gold in the 200-meter race, handing Turkey its first world title in track and field.

At the World Cross Country Championships in March, the Turkish team finished third in the mixed relay after Kenya and Ethiopia. This was again a first for Turkey, and some eagerly hailed the bronze as a rare achievement for a non-African country at the tournament. Yet the four athletes in the Turkish relay team were all naturalized Kenyans, who had also adopted Turkish names.

Erdogan Toprak, a lawmaker for the main opposition Republican People’s Party and a former sports minister, brought up the issue of “imported” athletes during the budget debates in parliament. “Who are Melek Hu, Ahmet Li, Bora Vang, Cem Zenk and Sirin He?” he asked, counting names that are combinations of Turkish and Chinese ones. “These are all Chinese athletes who were sent to the Rio Olympics as the Turkish table tennis team and have been competing [for Turkey] at world championships.”

Toprak lamented, “Turkish sports have been surrendered to imported foreign athletes just for the sake of medals.” He slammed the one-year weightlifting ban as a “big disgrace.” Addressing the AKP government, he added, “You are boasting of a tenfold increase in the number of licensed athletes, but what about any sportive achievements on the same level? You had taken over a national [soccer] team that was third in the world; today we have a national team that cannot even overcome the [World Cup] qualification stage and reach the playoffs. Even Syria’s national team, which has been training abroad amid a civil war since 2011, was able to reach the playoffs.”

For soccer-crazy Turkey, the national team’s failure to qualify for the 2018 World Cup in Russia was a huge disappointment. In soccer, too, foreign players have come to the forefront in Turkish clubs, although more than 600,000 Turks are registered as licensed players. As foreign stars take center stage in the clubs, the young domestic talent often stays on the sidelines, which many see as a key reason behind the debacle of the national team. In a domestic league game in October, Galatasaray, one of the country’s top clubs, went down in Turkish soccer history by fielding a lineup that had foreign players in all 11 spots.

In the past, some Brazilian players were naturalized to play on the national team, but that formula did not seem to bear fruit either.

While using “imported” athletes to revive the doping-ravaged sports scene, Ankara has launched an extensive program to discover and raise local talent, setting up “Olympic preparation centers” in 20 cities. More than 800 Turkish athletes in 18 disciplines are currently training and preparing for the Olympics at the centers, with the figure expected to reach 1,000 this year. The 2020 Tokyo Olympics and the qualifiers for the 2020 European soccer championships will be an important litmus test for how successful the program has been.