Although Egypt received six medals in the Tokyo 2020 Olympics for the first time in years, sports authorities in the country were criticized due to players’ complaints about inappropriate training. 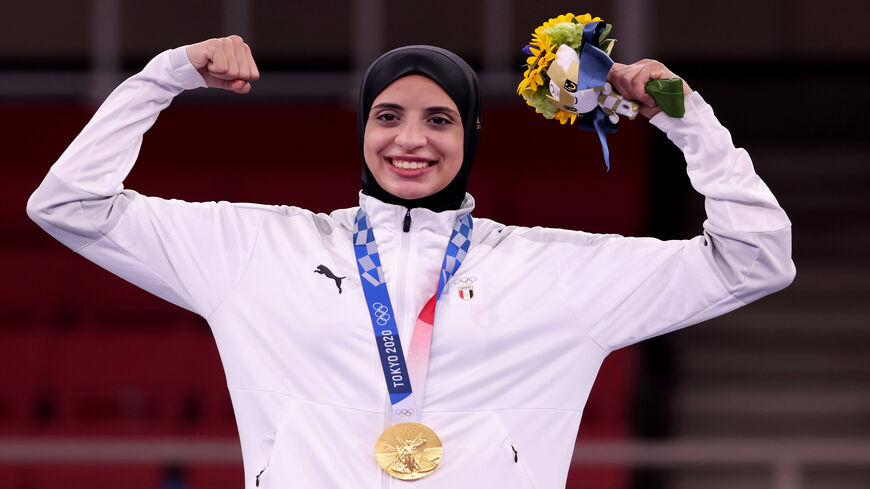 CAIRO — The sports authorities in Egypt have been the topic of debate because of the lack of appropriate training for players who participated in the Tokyo 2020 Olympic Games, in addition to some Egyptian players representing other countries during the competitions.

In an Aug. 8 TV interview, Egyptian President Abdel Fattah al-Sisi stressed his country's resolve to support athletes to raise Egypt's name high in international tournaments. “We are working to promote sports in schools and universities, and I salute all Egyptian families who are working on enhancing their children’s talents,” he said.

Sisi also announced that the athletes who won Olympic medals will be honored by naming several roads and bridges after them.

Egypt won six different Olympic medals in the Tokyo games, for the first time in the history of its Olympic participation. Feryal Ashraf won the gold medal in karate and Ahmed al-Gendy won the silver of the modern pentathlon for men, which is the first Egyptian medal in the modern pentathlon competitions. Saif Issa and Hedaya Malak won the bronze in taekwondo, and Muhammad Ibrahim “Kisho” won the men's wrestling bronze medal. Gianna Farouk won the women's bronze in the women's kumite's -61kg event.

During the tournament, several Egyptian players represented other countries, including Fares Hassouna who won a gold medal in weightlifting for Qatar, as the first gold medal in the history of the Gulf nation, in addition to Shadi al-Nahhas who played on behalf of Canada in judo competitions, and Amr al-Jaziri who represented the United States in the modern pentathlon in the Olympics, after representing Egypt in the last three Olympic rounds.

Athletes and analysts believe that athletes are leaving Egypt and representing other countries due to the lack of financial means and the lack of support needed for training.

Egyptian weightlifting champion Mohamed Ehab told Al-Monitor, “Egyptian athletes are forced to seek the citizenship of another country or represent it [in world competitions] in the absence of support in their own country.”

He expects the situation to change in the future in light of Sisi’s interest in supporting athletes, by increasing the value of material rewards and naming facilities and roads after the champions.

Ehab said that companies and institutions will seek to sponsor the champions if the state supports local games. He said he obtained a sponsorship contract that will be valid until the Paris 2024 Olympics.

He believes that any player has the right to represent any country as long as it sponsored and qualified him from the beginning.

On Aug. 7, Ehab had posted on Facebook his objection to “some countries' exploitation of the lack of financial capabilities of other countries to naturalize players who competed under their flag and became international players.”

Ibrahim Hassouna, father and coach of Qatar's gold medalist Fares Hassouna, said in a TV interview Aug. 1, “Fares was prepared for competition five years ago in Qatar with the aim of obtaining the gold medal.”

Ibrahim noted, “I agreed that Fares would play on behalf of Qatar, because no official from the Egyptian Weightlifting Federation contacted us.”

Ibrahim accused the Egyptian Weightlifting Federation of corruption because of “the appointment of coaches based on 'pleasantries' rather than competence. He added that his son traveled to work in Saudi Arabia and the United Arab Emirates, before eventually settling in Qatar.

Hesham Hatab, head of the Egyptian Olympic Committee, denied in a telephone intervention on Sada Al-Balad channel Aug. 10 Ibrahim’s allegations about the presence of nepotism in the Egyptian Weightlifting Federation.

Meanwhile, Mahmoud Mahgoub, head of the temporary committee for the management of the Egyptian Weightlifting Federation, confirmed in televised statements July 28 that Egypt has limited capabilities to spend on weightlifters. Mahgoub noted, “Hassouna [Fares] traveled to play with Qatar, and a lot of money initially dedicated to soccer clubs was spent on training him.”

In a parallel context, Egyptian analysts believe that there is administrative and financial misconduct from the Egyptian Olympic Committee and the sports federations in Egypt, due to the lack of training of players before the start of the Olympic competitions.

Sports analyst and journalist Mohammed el-Gazzar told Al-Monitor, “Soccer enjoys more support in Egypt than other sports, and this affects the support for players in [other] individual games, despite their victory in championships.”

Gazzar said, “Sports in Egypt have struggled due to corruption and financial crises, to the extent that the International Olympic Committee suspended the Egyptian Weightlifting Federation due to a doping issue, which cost Egypt two medals that were expected to be won by Ehab and Sarah Samir in the Tokyo Olympics.”

In December 2019, the Court of Arbitration for Sport confirmed the suspension of the Egyptian Weightlifting Federation for two years due to doping issues.

Gazzar believes that Sisi’s support for sports sends a message of reassurance to athletes that conditions will improve in the future and the necessary support will be secured.

He noted “complaints by [Egyptian] players during the Tokyo Olympics about not receiving appropriate training before participating in the competition, in addition to the lack of sponsors.”

Ramzy expressed his hopes that “Egypt should have a great place in sports and reap more medals in the future.”

In a phone interview on Al-Hadath Al-Youm channel Aug. 3, Egyptian wrestler Haitham Fahmy complained about the officials’ slackening, as wrestlers were not properly trained. Training for the Olympics began only one month ahead of the competition, he said, noting that officials informed them that “participation in the Olympics only serves honorable representation rather than obtaining a medal.”

Sherif al-Aryan, secretary-general of the Egyptian Olympic Committee, said in a July 25 TV interview, “About 200 million Egyptian pounds [$12.7 million] were spent to fully equip the [Egyptian] team [at the Tokyo Olympic Games]." With a total of 132 competitors, this amounts to an average of about $96,000 per athlete. National spending varies drastically from one country to the next, with some spending far more than Egypt. For example, in the 2016 Olympics in Rio de Janeiro, the United Kingdom spent roughly $1 million per athlete.

In other statements Aug. 8, Aryan praised the performance of the Egyptian team, explaining that it was a result of good training and effort. He noted that the Egyptian Olympic Committee broke the previous Egyptian record by reaping six Olympic medals.