Unlike the campaigns for elections held in April and September, in the next election cycle the issue of immunity from criminal trial for Prime Minister Benjamin Netanyahu will be squarely on the table for his opponents as well as himself to use. 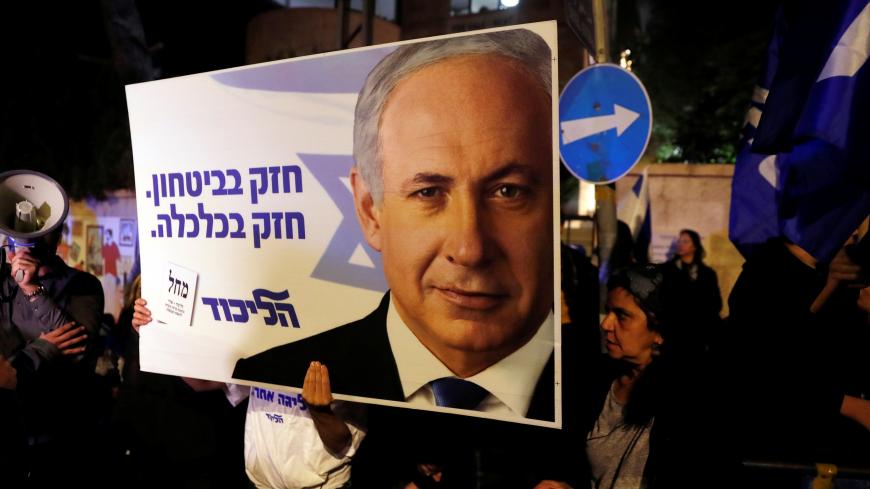 Prime Minister Benjamin Netanyahu has less than 20 days left to ask the Speaker of the Knesset for immunity from trial. Everything seems to indicate that the request will soon come. After it does, the request will become the central, and perhaps decisive, issue of the March 2, 2020, election.

Unlike the elections this year in April and September, in the forthcoming vote the issue of immunity will be set clearly on the table, without filters or distortion. As Knesset member David Bitan stated candidly on Dec. 11 just before the 22nd Knesset dissolved itself and Israelis prepared for another election, “[Netanyahu] is running. He is looking for another chance to win 61 seats and maybe even get immunity.” Miki Zohar, chairman of the Likud's Knesset faction, has been using every available opportunity to say that he will recommend that Netanyahu request immunity, as is his legal right. It doesn’t look like he will have to try too hard to convince the prime minister to do so.

Over the last few days, Netanyahu has told Likud activists in private meetings that he believes he will be able to win 61 seats for the right-wing and ultra-Orthodox bloc, even without Avigdor Liberman's Yisrael Beitenu. If he succeeds, he has an open road ahead of him in his drive for immunity. Even though no polls currently predict that the right-wing and ultra-Orthodox bloc will win 61 seats without Liberman, Netanyahu is clutching this plan with everything he has. It is the only way he can be spared immediate political oblivion and a trial.

In the quest for immunity, Netanyahu can no longer rely on Liberman. On Dec. 12, the Yisrael Beitenu chairman delivered the death blow to any possibility, no matter how slim, that he might help Netanyahu obtain immunity. He did, however, raise the possibility of Netanyahu being pardoned in exchange for retiring from politics and has said that he would support such a deal. “In general, the Knesset is fed up with Netanyahu. He has become a burden,” Liberman declared in a particularly icy tone during an interview with Ynet. “No immunity, pardon in exchange for honorable retirement.”

On a practical level, Netanyahu’s request for immunity cannot be brought up for debate in the Knesset because the legislature is now officially inactive, on an election recess. Nevertheless, the clock continues to tick. As soon as Attorney General Avichai Mandelblit handed indictments of Netanyahu to the Knesset Speaker on Dec. 2, the law granted Netanyahu 30 days to request immunity from trial. By law, the Knesset’s House Committee would debate the matter. The problem is that because the Knesset is in recess, there is no House Committee. Thus, if Netanyahu does request immunity, the decision could only be made after the election, when a new Knesset is sworn in. Until then, the immunity process is on hold.

On the other hand, the corruption charges against Netanyahu will no longer be “under investigation” during the campaign for the March election. Rather, Netanyahu is already under indictment for a number of charges, including bribery. His indictment will feature as a clear, established fact and resound throughout the campaign. Not only will Netanyahu be a prime minister charged with bribery, if he submits a request for immunity, he will also be a prime minister attempting to avoid a trial and justice.

Over the last few days, the Blue and White party realized that immunity is Netanyahu’s Achilles heel and that justifying it is difficult. That is why, before the Knesset's dissolution, Blue and White leader Benny Gantz called on Netanyahu to forgo immunity so that a unity government could be formed. Recognizing a trap, Netanyahu sent people to suggest that he was seriously “considering” the possibility, thereby paving the way for a unity government. As it was soon learned, however, it was all a ruse. The spin could not diminish the fact that Netanyahu really wants immunity and that the only way for him to get it is by controlling 61 seats in the Knesset. In other words, he needs a new election.

In a speech to the Blue and White Knesset faction on Dec. 12, Gantz remarked, “I wanted unity, and I said as much. You [Netanyahu] wanted immunity.” It looks like this will be a central theme in the Blue and White’s campaign. They will depict Netanyahu as a corrupt prime minister trying to escape the long arm of the law, but there is a flipside to this in the campaign that Netanyahu is planning to run.

“I am being hounded,” Netanyahu will tell his base with intensity. His main message will be that it is not him that the center-left bloc is trying to defeat, but the Likud and the entire right, so his request for immunity as long as he is prime minister makes sense. This message is intended to prompt Likud voters to turnout en masse. The thing is that Netanyahu needs more than just the Likud. He also needs the support of voters from the other right-wing parties, not to mention the ultra-Orthodox. He is playing for all 61 seats, but without Liberman.

Netanyahu is planning a two-stage campaign. The first stage is to get through the Likud leadership primaries, which are scheduled for Dec. 26. His run against former Minister Gideon Saar is expected to be the first real party challenge for Netanyahu in 14 years. After trying to block primaries altogether, Netanyahu came to the conclusion that an impressive victory in his party's primaries would help him in his national election campaign. He can then present himself as having gained renewed legitimacy as leader of the Likud, despite being indicted.

Netanyahu has the support of most Likud ministers and Knesset members, so he is likely to win the primary. Nevertheless, he is also aware that holding a primary with his complicated legal situation, and a primary with tens of thousands of voters, poses a certain risk. That is why he is doing everything he can to oppose Saar, using all the tools and power at his disposal. Meanwhile, Saar is taking advantage of the indictment, and rightly so. He highlights that the criminal charges have prevented Netanyahu from forming a government on two separate occasions, and that in effect, the charges are impeding the right from maintaining its hold on power. It may be a good strategy, but polls show that Netanyahu is still the Likud’s most powerful brand.

Assuming that Netanyahu wins the Likud leadership primary, he will launch the second stage of his strategy, in which he will not hide his intent to obtain immunity. On the contrary, he will turn the issue around and depict immunity as the only way to keep a right-wing government in power. As he will explain, it is necessary to prevent a “government coup.”