Even after the parties submitted their Knesset lists for the March elections, there is no significant change in the breakdown of power between the two blocs. 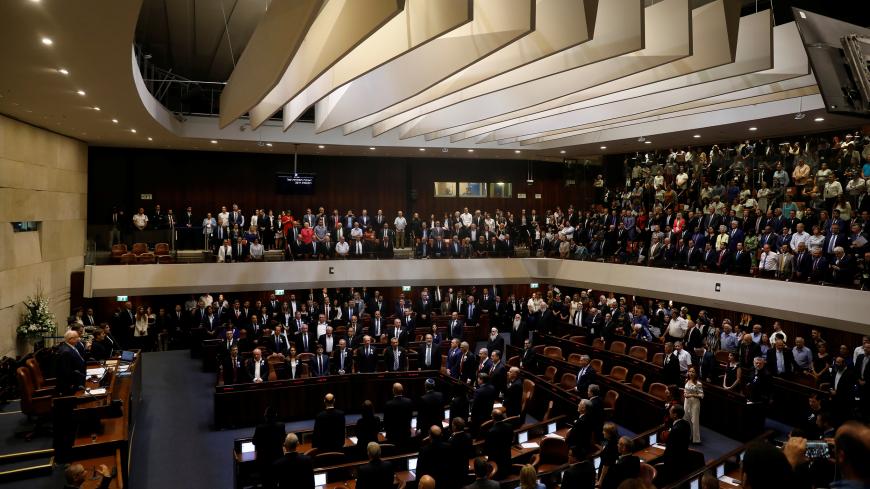 Some people may have hoped for the extraordinary to happen right at the very last minute, just before the parties running for the 23rd Knesset were required to submit their candidate lists. But soon after the clock struck twelve, they saw their hopes shattered. The deadline was midnight on Jan. 15, and when it passed, there was no sign that any of the lists would break the deadlock between the two blocs.

After the merger of Labor-Gesher with Meretz on the left, the parties to the right of the Likud followed their example with the merger of the New Right, HaBayit HaYehudi and the National Union. It looks like both camps learned their lesson. This time, competing egos and statements from the past were put aside, and merger agreements were cobbled together and signed in a matter of hours. In doing this, they were reducing the risk that one party or another would fail to pass the electoral threshold of four Knesset seats and that their absence would mean that the bloc would not have enough seats to prevent the rival bloc from forming a government. Still, on the right, Itamar Ben-Gvir’s Otzma Yehudit party was not part of these recent mergers and will run independently.

In the case of the right-wing parties, the merger agreement was only signed minutes before midnight, after the deadline was extended slightly. All in all, it was one of the most bizarre nights in the history of the Knesset, and there have been quite a few of those over the last year. As the new right-wing alliance (Yamina) was putting together its list of candidates, a stunned Ben-Gvir was making his way from one news studio to the next to attack Rafi Peretz, chairman of HaBayit HaYehudi and minister of education, on live TV. He slandered Peretz for violating an earlier agreement signed with him and leaving him out of the picture.

At that moment, the religious Zionist movement seemed especially pathetic. It looked like little more than an aggressive group driven by internal interests. Rather than showing any independent leadership or authority, it looked like Prime Minister Benjamin Netanyahu was calling all the shots.

As far as Netanyahu is concerned, this merger was the least possible evil. He threw everything behind ensuring that all the right-wing parties, including Otzma Yehudit, would run as a single list. In the end, Otzma Yehudit was left out, but the merger of the New Right, HaBayit HaYehudi and the National Union spared those three parties the risk of failing to pass the electoral threshold.

Even after all the internal reorganization within the blocs, resulting in a smaller number of parties, it seems as if the breakdown of seats has not really changed at all. Polls released the next day, on Jan. 16, by all the news stations found that while the Blue and White party maintained a slight lead over the Likud, there was no significant change in the breakdown of power between the two blocs, when compared to previous polls. The polls all showed that the Likud would manage to win at least 30 seats, despite Netanyahu’s difficult week in the Knesset, which began to debate his immunity. The Blue and White party remains the largest party, with Channel 11 News actually increasing the gap between it and the Likud to five seats (36 seats for Blue and White to 31 seats for the Likud).

Nevertheless, the chances of Israel finding out who its next prime minister will be on the night of March 2 is slim at best. It turns out that not much has changed since the April 2019 election. Netanyahu is still the leader of the Likud, and no one in his party threatens his leadership. He also has the backing of a very stable and loyal right-wing-ultra-Orthodox bloc. Running against Netanyahu is Benny Gantz, who remains safely ensconced in his leadership position in the Blue and White party. As in the previous two elections, the key to forming a new government lies with the chairman of Yisrael Beitenu, Knesset member Avigdor Liberman. The polls show him maintaining his strength, meaning that neither of the two blocs can get to 61 seats without him.

But that’s not all. All the restrictions, conditions and disqualifications remained in place. If anything, they only intensified since the September 2019 election. The front between Liberman and the ultra-Orthodox has heated up since then and effectively became a full-blown war. Liberman has also repeated his assertion that he has no plans to sit in a coalition with Arabs, whom he once again called “supporters of terrorism.” In the Blue and White party, Netanyahu remains a red flag if not worse. He has actually been indicted for bribery since the last September election, so the chances of forming a unity government with Netanyahu heading the Likud no longer exists.

In-depth surveys commissioned by the various parties show a state of deadlock. Never has the percentage of undecided voters been so low. Right now, it can be measured in single digits — just 5% — while the percentage of voters who are still deliberating between the right and left-wing blocs is even smaller, at 2%. What this shows is that most voters have already made up their mind about how they intend to vote, and they have no plans to rethink their position.

In the case of Netanyahu, it has been proven yet again that his entanglement in criminal proceedings has its price in Knesset seats. On the other hand, even though he has been weakened, he still has not collapsed, nor has he seen a sharp decline in support. Now that most of the right-wing parties have merged, and there is no longer a risk that they will fail to pass the electoral threshold, Netanyahu will certainly feel confident enough to “grab” some of their seats to reduce the gap between the Likud and Blue and White. Similarly, the Blue and White party will feel free to “grab” seats from the consolidated Labor-Gesher-Meretz list.

It has already been noted that none of this will change the breakdown into blocs. Even if Gantz emerges as the head of a large party with 38 seats, he will have grown at the expense of other left-wing parties. Should that happen, he will likely be the first candidate given a mandate to form a government. The problem is that as long as Netanyahu manages to preserve the loyalty of his right-wing-ultra-Orthodox bloc and Liberman continues to sit on the fence, Gantz will soon find that he has come up against a dead end.

Netanyahu remains blocked from almost every direction. Still, he is playing his few remaining cards quite well and managing to survive. His victory over Gideon Saar in the primaries for the Likud party leadership gave him the tailwind he needed and bolstered his standing within the party. His "immunity train" started rolling immediately after that (with his campaign in the Knesset to achieve immunity of prosecution). It soon turned out to be his weak point. The Blue and White party will do everything it can to keep the issue on the agenda right up until the election and beyond. In contrast, Netanyahu will do everything he can to sideline the issues of immunity and indictment from the electoral agenda and from public attention.

On Jan. 23, Russian President Vladimir Putin will be visiting Israel. His visit will refocus the agenda and provide Netanyahu with a precious photo op with the Russian leader. If the assessments are correct and Putin announces by then that he plans to release Naama Issachar, an Israeli backpacker being imprisoned in Russia for drug smuggling, there would be more interest surrounding his visit, and Netanyahu would score some points. Nevertheless, it is doubtful that even that would be enough to impact the division of the parties into blocs.

Netanyahu is adept at reading voting trends. He realizes that he will not be able to attract voters from the political center, or in other words, to get supporters of the Blue and White party to cast their ballots for the Likud. Instead, he is focused on keeping what he has. In a conversation with Al-Monitor, one Likud minister summed up on condition of anonymity Netanyahu’s situation like this: “The chances of him winning 61 seats are miniscule, and he knows that. On the other hand, if he manages to keep his current strength, it would be a major achievement. What it would mean is that the Blue and White party will be unable to form a new government.”