The obedient vote by the Likud Party’s Knesset faction to dissolve the parliament, following Prime Minister Benjamin Netanyahu’s needs and wishes, shows the current state of Israel’s ruling party — one of being in an era of a strongman who has turned the Likud into a one-man band. 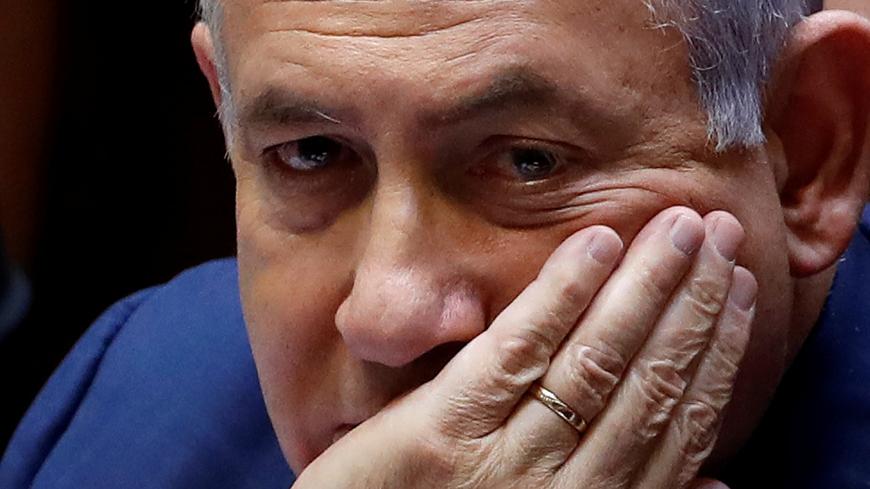 Israeli Prime Minister Benjamin Netanyahu sits at the plenum at the Knesset, Jerusalem, May 30, 2019. - REUTERS/Ronen Zvulun

Some 30 minutes prior to the final May 29 Knesset vote to dissolve itself, Prime Minister Benjamin Netanyahu’s spokesperson sent around a photo showing members of Likud members waiting for him to enter the party’s meeting room. “The Likud faction is convening in full,” said the caption. The photo of the Likud’s 33 Knesset members and government ministers (not including Netanyahu) lining up as one before voting themselves out of office, less than two months after being elected, is a faithful portrayal of the Netanyahu era. It also reflects the Likud movement’s organizational ethics — the party does not depose its leaders even when they appear to act contrary to the collective interest.

Netanyahu convened his colleagues only to fully ensure that they were marching in lockstep, that no one was planning to spring any surprises on him during the vote. After all, he had already endured several exhausting and tense days when he realized that Yisrael Beitenu party Chair Avigdor Liberman had probably made a strategic decision to prevent him from forming his fifth government. Without Liberman, Netanyahu could not assemble a majority coalition; thus President Reuven Rivlin could have proceeded by tasking another Knesset member with forming the new government. At that moment, Netanyahu, the arch-politician, lost control over the developments and could not afford to back an alternative government that he himself would not lead. Given the circumstances and despite the deadlines looming of his possible indictments, opting for new elections was the littlest of all evils as far as he was concerned.

Everyone showed up in the meeting room, including Knesset member Gideon Saar, the only Likud lawmaker to challenge Netanyahu’s conduct in recent weeks, whom Netanyahu repeatedly humiliated and persecuted. Saar might have felt justified in trying to push Netanyahu aside or to seek revenge. In recent times, all eyes have been on Saar. Netanyahu and his people thoroughly examined every step he took, every incidental meeting. However, despite the intense bitterness he felt toward the prime minister for seeking his political demise, Saar lined up with his colleagues and did Netanyahu’s bidding. Saar did so because he, of all people, knows that any attempt to hit back at Netanyahu now could result in political disaster, condemn him to ostracism by the Likud and destroy any prospects he may have of leading the party and the political right in the post-Netanyahu era, which may be just around the corner.

The right wing and Likud would not have forgiven Saar had he tried behind the scenes to tailor an alternative government, headed by the Likud and in partnership with the Blue and White party, while Netanyahu continued his efforts to establish a (right-wing) national government. Such attempts by Saar would have also created a rift between him and the ultra-Orthodox parties, with which he has nurtured close ties for years. Therefore, Saar made the right political decision for himself.

The Netanyahu era in the Likud, as clearly portrayed since Netanyahu’s major victory in 2015 and until its peak when his colleagues voted themselves out of office at his bidding — is a strongman’s era. It is an era of one powerful leader who eviscerated top members of his party, avoided grooming a successor or lining up an alternative leadership tier. Netanyahu, who derives his political power from his public popularity and from being the unchallenged leader of the political right, has turned the Likud from a party known for its vibrant democracy and shifting political alliances into the Netanyahu party.

Apropos Saar, he was one of those who refused to be tempted into leaving the Likud and joining the Kadima party formed in late 2005 by then Likud leader and Prime Minister Ariel Sharon. Sharon liked Saar, but Saar did not give in to temptation to be named a minister. He stayed with Netanyahu and a handful of loyalist lawmakers and together, in the 2006 elections, suffered the biggest loss the Likud had ever known, plunging from 38 to 12 Knesset seats. After the elections, a minor attempt was mounted to replace Netanyahu as party leader, only to be quickly doused.

The 2005 Likud split is a traumatic event in the party’s annals. Party supporters and activists still bear its scars. Minister Tzachi Hanegbi can attest to them. On the eve of that split, the Likud Central Committee placed him first among the candidates it picked for its Knesset list. He nonetheless went with Sharon and since returning to the party fold in 2012 has been unable to climb back to the top, Ahead of the April 9 elections this year, he placed 14th on the Likud candidates list in party primaries.

One can obviously criticize the current Likud leadership for its weakness and helplessness vis-a-vis its leader who is up to his neck in suspicions of corruption, and to claim that this was the reason he failed to put together a government because only the right and the ultra-Orthodox parties would join him under such circumstances. However, no one familiar with Likud history sees anything strange in this behavior.

Three days prior to the dissolution of the Knesset, Netanyahu finally understood the bind he was in, launching a series of tactical and strategic moves to contain the damage and, above all, thwart any possibility of someone else forming Israel’s next government. Although prospects of such a scenario were dim, he nonetheless did not go back to Rivlin and ask him to entrust the task to someone else, a move that would have robbed him of control of the process.

Netanyahu’s decision to unite with Finance Minister Moshe Kahlon — a former Likud stalwart — and his center-right Kulanu party was a strategic move, enabling him to ensure that Kahlon and his three Kulanu lawmakers would support his move to dissolve the Knesset. Also, in the Sept. 17 elections, a joint run with Kahlon will surely bring some of his supporters over to the Likud. Netanyahu promised Kahlon he could keep his job as finance minister and appoint another of his Kulanu colleagues as a minister in Netanyahu's next government. The prime minister also promised that all four of the elected Kulanu representatives would be included in the Likud’s list of candidates for the next elections. In order to reassure Likud backbenchers who fear being pushed out of the next Knesset by the merger with Kulanu, Netanyahu promised them a deal known popularly as “the Norwegian Law.” The Norwegian Law prevents ministers from serving as parliament members at the same time. Netanyahu’s proposal was to appoint four elected lawmakers as government ministers. These ministers would then resign from their position as Knesset members, vacating four spots; Netanyahu could then give their Knesset seats to the four candidates next in line. This commitment is not anchored in any written document and has no validity, but the condemned had no choice but to accept it. Netanyahu also named one of the party’s most popular lawmakers, acting Foreign Minister Yisrael Katz, as full-time foreign minister (a job Netanyahu has held in recent years), thereby ensuring his loyalty and precluding a revolt at the top.

Netanyahu also began gearing up for his re-election campaign in other ways. He invited Supreme Court Chief Justice Esther Hayut and her deputy, Justice Hanan Melcer, to his office in order to convey a sense of normalcy in his relationship with the judiciary despite a stormy relationship over his allies’ attempts to rein in the country’s top court. The photo of the meeting issued by his office, showing the three smiling participants, was designed to convey a message to the public ahead of the September elections, which Netanyahu knew already, would be inevitable even as he met with the justices.

Several minutes after the Knesset voted with a clear majority to disperse, Netanyahu was already deep into his new election campaign. At an impromptu news conference in the Knesset, he minted one of his election slogans: Liberman had proven his leftist political leanings. The Likud leadership parroted “Liberman is left” in unison.