Could Nobel laureate Shechtman be Israel's next president?

The Knesset is preparing to elect the 10th president of the State of Israel in May 2014, and unlike previous times, candidates include a growing list of names from outside the political sphere. 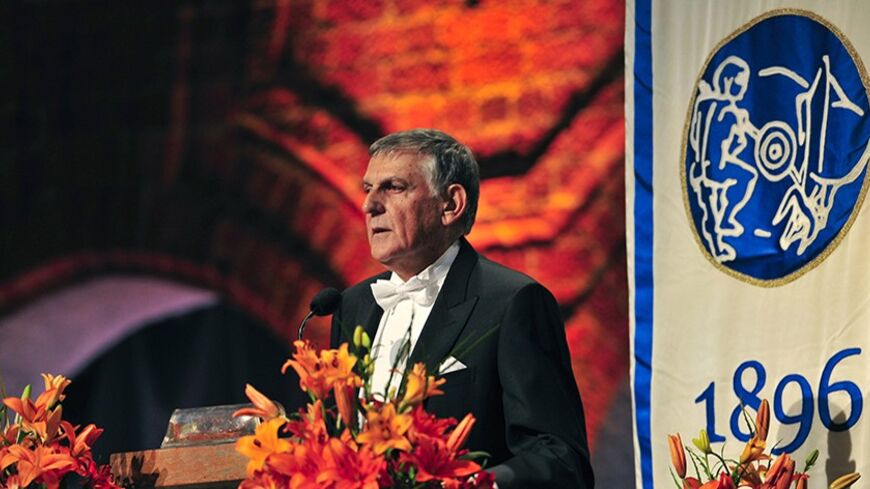 “I wish to act for the benefit of the citizens of Israel. I'm a Zionist. … I want to nurture a generation of social individuals who see the needs of others.” These were the words spoken by Dan Shechtman, winner of the 2011 Nobel Prize in chemistry, when announcing his surprise decision to run for president of Israel.

Shechtman, who turns 73 on Jan. 24, announced his candidacy for the presidency on Israeli TV Channel 1's prime-time newsmagazine on the night of Jan. 17, and spoke enthusiastically of his desire to “change things for the better in this country … especially in the fields of education, enlightenment and technological entrepreneurship.”

He emphasized that if elected president, he would refrain as much as possible from dealing with diplomatic issues, so as not to be associated with any particular political agenda, and focus instead on domestic issues. He noted that he had made the decision following calls by his friends and many other fellow citizens, who told him they would like to see him in office as president.

In the interview, Shechtman gave the impression of an amiable professor, full of good intentions. He stirred up empathy, but at times, especially when trying to explain to journalist Ayala Hasson why he was the right man to step into the shoes of incumbent President Shimon Peres, he sounded like a contestant on a reality show. He recounted that he was in the habit of driving the same old car for years, replacing it for a new model only once every two decades, thus inspiring the feeling that he was a modest man — the antithesis of the image of the common Israeli politician as a flamboyant party functionary.

Were the president elected by the public at large, Shechtman could stand a good chance of beating almost any other political nominee. He is positioned just where “new politics” converge with the social justice movement. He could become, if you will, a trendy “new president.” However, the next president is to be elected in May 2014 by the Knesset — a narrow body of 120 members, packed with political interests and intrigues.

Yet, only once in the history of the State of Israel has this election mechanism severely failed. It was when Moshe Katsav was elected the eighth president of Israel. He was subsequently forced to resign following a criminal investigation, which culminated in his conviction on rape charges.

And while his predecessor in office, the late Ezer Weizman, got involved in an unpleasant financial affair having to do with money (allegedly) received from Israeli businessman Edward Seroussi, he left the presidency at the end of a full seven-year term of vibrant activity. Indeed, most presidents nominated from within the political system or otherwise associated with it brought honor to the presidency. By and large, they were well-liked and closely affiliated with the public, and they were popular abroad as well. Alas, these days, when our elected representatives are so lowly regarded, it is no wonder that the list of candidates for the presidency from outside the political sphere is getting longer by the day.

Among the presidential aspirants who have already entered the contest are David Levy, a former foreign minister; Natan Sharansky, the chairman of the Jewish Agency who had been arrested in the former Soviet Union for pro-Zionist activity; Avigdor Kahalani, an Israeli war hero; Dalia Itzik, a former Knesset speaker; and Rabbi Yechiel Eckstein, chairman and founder of the International Fellowship of Christians and Jews. Other than Itzik, they have not been associated with the political establishment in recent years, which seems to be an advantage in the eyes of the Israeli public. Shechtman implied as much in the TV interview, and although he was careful not to say so explicitly, it was quite clear that he believes he has the edge over the presidential nominees who come from within the political system, and that unlike Knesset members Binyamin (Fuad) Ben-Eliezer and Reuven (Ruby) Rivlin, he is an impeccable “outsider,” one who has never been sullied by political dealings.

Shechtman is indeed a highly esteemed figure by his own virtue, and world-renowned in his field; having been awarded the prestigious Nobel Prize, he brought great honor to the State of Israel. Be that as it may, it is not at all certain that his outstanding scientific achievements, his international reputation or his wish to act for the benefit of his people are any guarantee of success. None of these necessarily indicate that he has the required skills for the lofty position, which calls, after all, for political aptitude and diplomatic flair.

Regardless of his reluctance to get mixed up with controversial issues, Shechtman would have no choice but to be in touch with the diplomatic issues currently on the agenda. Educational or economic issues cannot be handled independently from the conflict with the Palestinians.

Thus, Shechtman would have to get acquainted with the political system — and not only because it is the system that elects the next president but also because the president acts as an intermediary, so to speak, between the public and the political echelon. It is needless to say, then, that any nominee from within the political system would inevitably be better skilled than he is in this respect.

The elected public officials on the list of presidential nominees — Ben-Eliezer and Rivlin, and Minister Silvan Shalom, who has not yet officially announced his candidacy — are veteran politicians who have never been involved in any corruption affairs. All three served in most-senior positions of government: Ben-Eliezer was minister of defense (2001-2002), Shalom was minister of foreign affairs (2003-2006) and Rivlin served as speaker of the Knesset (2003-2006 and 2009-2013). All three have vast public experience and impressive records. They may be popular with some, while others may loathe their style or worldview, but it cannot be argued that any of them is unfit for the job.

Of the nine presidents of the State of Israel, eight were politicians or figures closely associated with politics and public activity. The fourth president of Israel, the late Ephraim Katzir, who like Shechtman was a professor of chemistry, was considered a rather dull president, somewhat detached from the public. The first president of Israel, Chaim Weizmann, was also a scientist, a doctor of chemistry, but unlike Katzir, he was elected to the presidency by virtue of his record as a statesman and as a quintessential politician who had served (in the pre-state days) as president of the Zionist Organization.

It is not at all clear whether the criticism leveled at the politicians contesting the presidency, by both the public and media, is in fact justified. Shechtman is no doubt a worthy candidate. However, this in itself cannot guarantee that he would be a better president than the political contenders. What’s more, the public empathy for him apart, Shechtman would have to be elected by the Knesset — and in this arena, his prospects are negligible. He has already admitted that he is still trying to secure the support of 10 Knesset members — the minimum required for contesting the office.

It may well be that Shechtman will receive the support of the ''new politics'' representatives who entered the Knesset in the last election and changed its face. Yair Lapid, chairman of the Yesh Atid Party, has already announced that his faction, numbering 19 Knesset members, will have the freedom of vote on the issue. Nevertheless, Rivlin, Ben-Eliezer and Shalom still have the upper hand in the Knesset. The first two have been working diligently lately to enlist support among their colleagues in the Knesset.

If the professor of chemistry is really serious about his candidacy for the presidency, he will have to undergo expedited political boot-camp training in the coming months in anticipation of the decisive vote.