Israeli politics is undergoing a cleanup process, in which veteran Likud and Labor seniors find themselves out of the game, while new players, such as former minister Moshe Kahlon and ministers Yair Lapid and Naftali Bennett form the new political map. 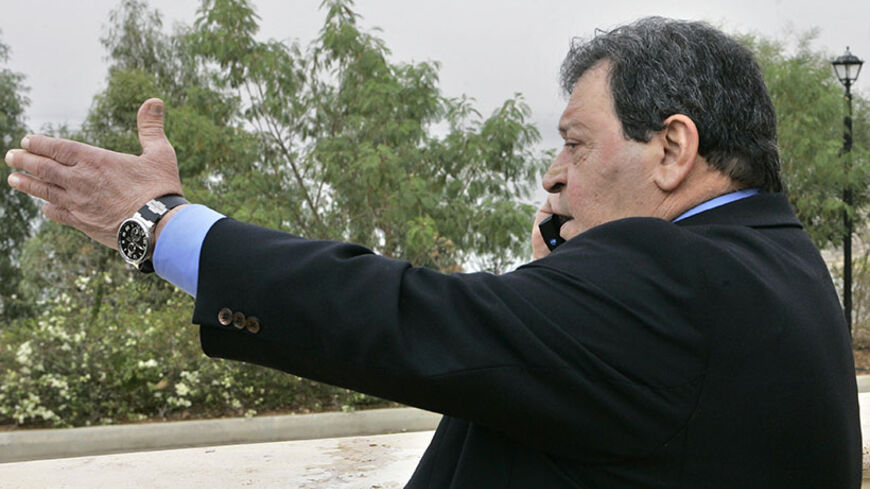 Binyamin Ben-Eliezer speaks after a conference at the Dead Sea Shore near Amman, Dec. 22, 2008. - REUTERS/Muhammad Hamed

It was March 2009. After a vehement and raucous debate, the members of the Labor Party’s Central Committee voted in favor of party Chairman Ehud Barak’s proposal that they join Prime Minister Benjamin Netanyahu’s second government. It was no easy battle. There was a large group of opponents, who said that the Labor Party should recuperate in the opposition, rather than serving as a fig leaf for another right-wing government. But that group faced off against much stronger forces, including former minister Binyamin Ben-Eliezer, the all-powerful head of the Histadrut Labor Union Ofer Eini, and former minister Shalom Simchon, Barak’s longtime confidante.

These three mega-politicians who controlled the party and its members had managed to grant Barak a second term as defense minister. They reasoned that having the Labor Party in the coalition would put the government on a more moderate footing, both economically and diplomatically. The approval that Barak received from the party’s Central Committee was the last hurdle in a much larger political game, which included a secret agreement between him (who was then head of the opposition) and Netanyahu, to join forces after the elections. Barak showed no interest in the fact that the Labor Party suffered a resounding slap in the face from its electorate, dropping to just 13 seats, and the right thing for it to do at the time would have been to rebuild itself in the opposition. He wanted to stay in the Defense Ministry, and that’s exactly what happened. If judged by its results, the fact that the Labor Party was part of the coalition did not lead to a diplomatic breakthrough, nor did it prevent a sharp rise in both the cost of living and the number of people living below the poverty line.

This important political maneuvering, which took place just five years ago, underscores how far the political system has shifted since then. Last week’s presidential elections (June 10) also brought the scope of these dramatic changes to the forefront.

First of all, the election battle itself put some of the country’s most senior politicians who sought to be elected president out of the picture entirely. For example, in the not so distant past, Silvan Shalom (Likud) was such a potent political force that he was appointed finance minister and foreign minister. At one point he regarded the president’s house as a stepping stone on his way to the prime minister’s office. Now, however, he is trying to clear his name after leaving the race under suspicion of having sexually harassed a member of his staff. Shalom was left beaten, publicly speaking, and the possibility of him running for prime minister is not even brought up anymore.

Knesset member Meir Sheetrit (HaTenua) had also served at the head of several of the most senior ministries, including finance and justice. In fact, he was almost elected president, though he is now busy dealing with suspicions that he sexually harassed his housekeeper. It is very doubtful whether he will return to serve in the next Knesset.

Two other key figures in Israeli politics were also pushed aside as a result of the president election. One was the former Knesset Speaker Dalia Itzik, once a senior member of the Kadima Party and a confidante of President Shimon Peres. The other was Binyamin (Fouad) Ben-Eliezer, whose whole world came crashing down on him just three days before the election he was expected to win when he was subpoenaed to an embarrassing police investigation.

The presidential election proved that the longstanding rules of the political system have changed, and that the system itself is undergoing a thorough transformation and purge. There is, for example, the complete lack of tolerance or clemency for politicians suspected of committing criminal acts. Ben-Eliezer quit the race after one single interview with the police on his investigation, because he realized that the current structure of the Knesset represents a “the new politics,” one in which he has no chance of surviving. The same is true of Shalom, even though the case against him was closed due to a lack of evidence. Nevertheless, he also realized that in the current political atmosphere, there was no way he could run.

This mood among the general public also lies behind the demand that the candidates disclose their net worth. This came up after it was discovered that Ben-Eliezer paid for part of his luxurious apartment, which cost him 9 million shekels [some $2.6 million], with a loan from a wealthy businessman. Not only did he fail to report the loan, he also refused to give a reasonable explanation as to why he kept $600,000 in a safety deposit box in his name.

Added to this thorough “spring cleaning” are the ignominious falls of two potential prime ministers in the past two months. Former Prime Minister Ehud Olmert may have planned a comeback, but he will be forced to spend the next few years behind bars, after being convicted of accepting a bribe. Meanwhile, Lt. Gen. (res.) Gabi Ashkenazi, the former chief of staff, may have planned to take over the Labor Party, and from there to go straight to the prime minister’s office, but instead he finds himself embroiled in the Harpaz affair. The popular ex-military leader, whose patrons once included Eini and Ben-Eliezer, will likely spend the next few years defending his reputation.

This new brand of politics only entered our lives in the last elections in response to the social protests, but it is just the beginning of even further-reaching and deep-seeded change. The new main players, Yesh Atid Party Chairman Yair Lapid and HaBayit HaYehudi Party Chairman Naftali Bennett, both brought a new style of management to politics with them. Even though their alliance fell apart, it still has an impact on the political system in the sense that it proved that cooperation is possible outside the old frameworks (and that is exactly what happened in the presidential election).

In other words, it is the difference between the power of political wheeler-dealers like Eini, Ben-Eliezer, and Barak, who were able to cobble together a National Unity government with Netanyahu back in 2009, while an entirely new political powerhouse, consisting of Lapid and Bennett, coerced Netanyahu into accepting a government that he never wanted. It took time for Netanyahu to realize that the rules of the game had changed, and the same thing could also be seen in the way that the Labor Party under Shelly Yachimovich acted when confronting Netanyahu. She turned down his generous offers to join the government, while Eini and Ben-Eliezer, who tried to convince her otherwise, were rejected rather rudely. Even now, with Knesset member Isaac Herzog at the head of the Labor Party, the chances of this faction made up primarily of new Knesset members being dragged into a Netanyahu government to “advance the peace process” are slim.

What is the next stage? All polls show that Bennett and Lapid are here to stay and will survive the next election cycle. They may no longer be allies, but they are starting to acquiring political seniority and influencing the system each in his own way. Similarly, the alliance between Netanyahu and his Foreign Minister Avigdor Liberman has disintegrated and will not be restored before the next elections. Liberman, who is constantly sending out feelers to the star of the party’s “social spirit,” former Communication Minister Moshe Kahlon, has concluded that the alliance with the Likud has worn itself out.

It can be said with almost complete certainly that Kahlon will be a major player in the next Knesset or maybe even the next government. Kahlon may have grown up living and breathing the Likud, but as a politician with some of the most acute political senses today, he will be running in some new political framework. Kahlon realized before the last elections that the Likud under Netanyahu had gone over to the extremists, while distancing itself from the weaker sectors of the population, and in response, he quit the race at the very last minute. The results of the elections, with Netanyahu and Liberman surviving by the skin of their teeth, only served to prove how massive the Likud’s problem really was. This was expressed again in the presidential election, when Netanyahu and Liberman could not prevent their sworn enemy Reuven Rivlin from winning. Furthermore, Interior Minister Gideon Saar, himself a member of the new generation in the Likud, has been able to position himself as a potential rival to Netanyahu in the next elections, after supporting Rivlin, despite the ire of Netanyahu and his wife.

The decline of the ruling party’s appeal is largely due to the fact that over the past few years it has become home to the far right. This can be seen in events that took place on the margins of the presidential election. Once it was announced that Reuven Rivlin was the newly elected president, and that his seat in the Knesset would be taken by former Knesset member Carmel Shama HaCohen, Shama surprised everyone by telling an interviewer that he is not that enthusiastic about returning to the Likud, and that he will even consider joining forces with Kahlon in the next elections. He went on to explain that the Likud is focused on the settlements of Migron and Hebron, which is why he would prefer to be part of a new home, which works on behalf of the entire population. In other words, what Shama said was that the Likud, in its current constellation, is a party in decline, while things more in keeping with the spirit of the times are taking place on the outside.