In an interview with Al-Monitor, Meir Sheetrit supports Hamas-Fatah reconciliation, even though this might not be the most popular stance with the Israeli public for a presidential hopeful. 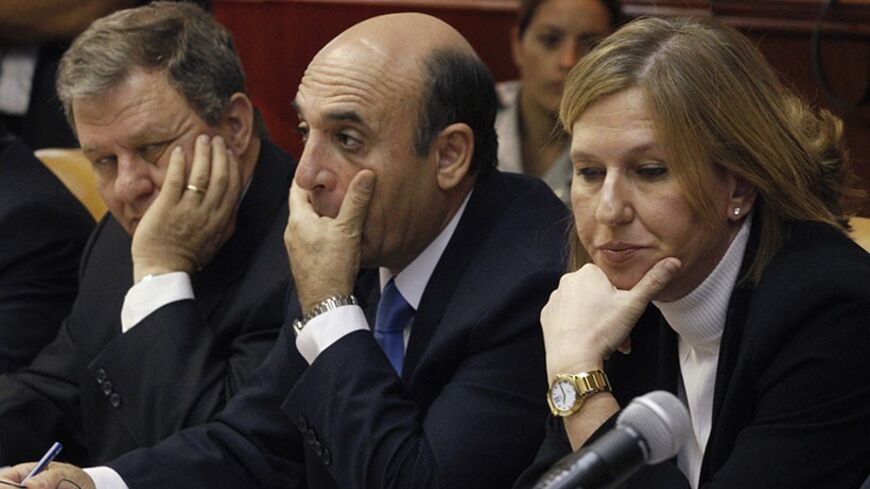 “There is no reason to be alarmed by the Fatah-Hamas agreement. This actually could be an opportunity for us,” says Knesset member Meir Sheetrit (the Hatnua Party chairman) as he attempts to moderate the aggressive responses evinced by Israel’s prime minister and the right-wing ministers toward the news of the Palestinian reconciliation.

This is a brave stance, uttered loud and clear. His manner seems to contradict what is expected of someone running for the role of president, and is supposed to try and please as many Knesset members as possible. After all, they are the ones who will make the decision. But Sheetrit swims against the current, and not for the first time.

When he was in the Likud Party, Sheetrit spoke in favor of the two-state solution and paid a political price for doing so. He left it for the Kadima Party with the late Prime Minister Ariel Sharon and when that party fell apart, Sheetrit chose Justice Minister Tzipi Livni’s side and founded the Hatnua Party with her. They ended up with only six mandates and Sheetrit, who had served as a high-ranking minister in all the previous Likud and Kadima governments (justice, finance, interior and housing ministries) — was forced to settle for faction chairman.

Now, Sheetrit is busy running for the presidency. Evidently the elections will take place during June and it's difficult, if not impossible, to lay bets on the results. There are at least six candidates already, out of which three are active politicians: Knesset member Reuven "Rubi" Rivlin, Knesset member Binyamin Ben Eliezer and Sheetrit. There are also three “external” candidates: Former Supreme Court Justice Dalia Dorner, former Minister Dalia Itzik and Nobel Prize laureate in chemistry Dan Shechtman.

At this stage the race is crowded and almost certainly there will be two rounds of elections. On April 28, in an interview with Al-Monitor, Sheetrit explains that his objective is to make it to the second round, at which point he reckons that he can win: If he runs against Ben Eliezer, the entire coalition will back him; if he runs against Rivlin, the entire left will be on his side.

Al-Monitor:  Knesset member Sheetrit, aren’t you concerned about expressing such left-wing political stances when running for the presidency?

Sheetrit:  The right wing is familiar with my opinions. My positions are clear and I never deceived anyone at any time. They know my opinions. Even when I was in the Likud, I supported the two-state solution and I never hid it. It is also clear that I paid the price. I intend to be a social-justice president, and as such a president I won’t be the one proceeding to make peace. I believe that our real threat is not the Arabs, but the social ills of our society.

Al-Monitor:  Do you really view the agreement between Fatah and Hamas as an opportunity?

Sheetrit:  I am one of those who feel that we can achieve peace despite all the trials and tribulations, and I think that every crisis also represents an opportunity. Precisely now, when the Palestinians are hard pressed and Hamas is hard pressed, economically as well as diplomatically, this can be a real opportunity. After all, they boycotted Hamas in Egypt and declared it a terrorist organization. Hamas is in dire economic straits now because Egypt has closed up the passageways.

This is a good opportunity to put them in a no-way-out situation. In my opinion, people in Israel err when they view the reconciliation agreement in a totally negative light. I don’t see why we have to reject it out of hand. After all, in the past the extreme right in the Knesset said that the peace agreement would not be serious because we are conducting negotiations only with the West Bank. Now that Fatah has reconciled they say no, now we can’t negotiate with you because you made an agreement with Hamas.

I think that in the current situation there is a certain likelihood that Hamas understands its situation, that it cannot remain alone any longer. Therefore, perhaps there is a certain chance that it will accept the terms of the Quartet, that it will recognize the State of Israel and be against terrorism. If that will happen, we have no reason not to talk to it. Under such circumstances, there would be one Authority that negotiates with us.

Al-Monitor:  But you are member of a coalition in which most of its members want to halt the negotiations.

Sheetrit:  I am very happy that the government did not shut the door on negotiations and did not say that we are stopping the talks, only suspending them. In my opinion, that happened as a result of the fact that Tzipi Livni is in the government. She would not have agreed to say, “We are closing the door.” Therefore, the government accepted a softened version of suspending the talks and punishing the Palestinians. In my opinion, these punishments will not bear fruit.

Al-Monitor:  Is this a real loss?

Sheetrit:  Certainly. Imagine that after the discussion in the Cabinet, Netanyahu would have emerged with this decision: that so long as Hamas is a terrorist organization we cannot talk to them, but we are definitely open to the option that Hamas accepts the terms of the Quartet and then we'll conduct peace negotiations. Netanyahu would be king of the universe. Let me remind you that when there was a terrorist attack in the Dolphinarium club [Tel Aviv, 2001], Sharon assembled an emergency Cabinet meeting that night. I was there. Everyone reckoned that Arik [Sharon] would take apart the West Bank, and what did he say? That restraint is power. The whole world marveled. The world accepted us outstandingly. Under such circumstances it is not enough to be right, you have to also be smart. When [Palestinian President] Mahmoud Abbas says that the Holocaust was the most heinous crime to humanity in modern history, why reject him point-blank? Why don’t we praise him for his statement? What’s the alternative — one country for two nations?

Al-Monitor:  But aren’t you also a part of this failure? You have been in the government this last year; Tzipi Livni conducts the negotiations.

Sheetrit:  The time spent on negotiations was squandered, unfortunately, and we did not achieve any results. But Tzipi is not the decisive factor and she does not decide. She can push forward. Therefore, I say to the right that protests against Tzipi, what are you complaining about? Bring your complaints to [Prime Minister Benjamin] Netanyahu, Tzipi is Netanyahu’s emissary. She works in absolute coordination with him.

I think that at the end, it wasn’t Tzipi who erred. We are here in order to promote the peace process. Unfortunately, the result of the negotiations is poor. If it was up to us, we wouldn’t have released terrorists. We would have preferred to freeze construction [in the settlements]. I said this in real-time, that I don’t understand the government. Why is it releasing terrorists? It is 10 times better to freeze construction in the settlements. If the negotiations end without peace, we can return to build in the settlements, for those who believe in it. But the moment you’ve released terrorists — it's a done deal. Then there can be a situation where we remain without peace and also without [imprisoned] terrorists, and that is what is happening now.

Al-Monitor:  Do you have red lines? Till when will you remain in the government?

Al-Monitor:  Tell me, how do you think you can win the presidential elections with six mandates?

Sheetrit:  This [election] is the personal choice of the Knesset members: They are supposed to choose the person they feel will make a good president. My record is far more extensive, diversified and successful compared to the other candidates. I am younger than the other candidates by 10-15 years. I have experience under my belt; I am the most long-standing Knesset member of the lot and I have the most seniority in politics. I am in excellent shape for hard work. If they would examine the candidates according to clear, realistic parameters, my chances are excellent.

Al-Monitor:  You declare that you will be a social-issues president, but all the candidates state the same thing. Is this the “bon ton” now in the spirit of the social justice protest?

Sheetrit:  I am not comfortable assigning grades to anyone. Let them check the records of all the candidates on social issues, the facts speak for themselves and the answer will be clear. No one has filled a variety of positions that even comes close to what I have done. I was a young mayor when I took [the development town of] Yavne and transformed it from a godforsaken place to one of Israel’s loveliest cities. My legislation in the Knesset is social justice-oriented in its essence.

Al-Monitor:  What do you say to those who argue that due to the corruption in the political world, the elected president should be “external”?

Sheetrit:  The role of the president is very political. He has to understand politics, since he is the one nominating the candidate for assembling the government. He dispenses pardons to people. He is not an executive entity but he can have a decisive influence on the public agenda. I’ll give an example: Let’s say a president wants to float the issue of the hardships and tribulations of Holocaust survivors. He can visit survivors privately, and force the system to take care of them. That is what I will do if I am elected.