In an interview with Mazal Mualem, Meir Sheetrit explains why Israel should have adopted long ago the Arab Peace Initiative. 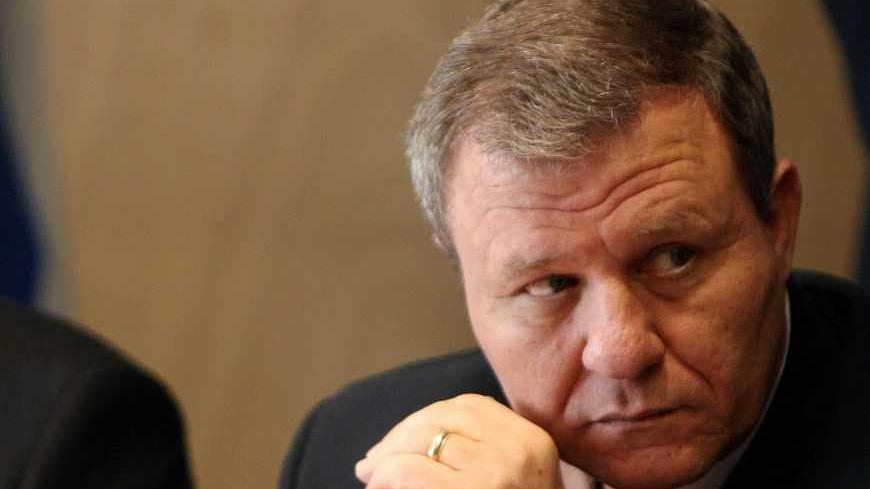 Even when he was in the Likud, current HaTenua faction chairman Meir Sheetrit was regarded as a political dove. In fact, Sheetrit’s political positions could easily earn him a place of honor in the Meretz [left-wing] party. No sweat.

Ever since the Arab Peace Initiative was launched in 2002, Moroccan-born Sheetrit became one of its most prominent lobbyists. As a minister in the Sharon government, he tried, unsuccessfully, to persuade Prime Minister Ariel Sharon to adopt the Arab Initiative at the expense of the disengagement plan from Gaza. Despite his efforts, Sheetrit remained alone in his opinions. Now, in his new political home under Tzipi Livni’s leadership, he is trying again to persuade his compatriots in the faction to adopt the Arab Peace Initiative as their diplomatic program. In an interview with Al-Monitor, Sheetrit said that the coming year is the opportunity for Livni and HaTenua to promote the peace process, “because if it doesn’t happen — we will disappear.”

At 65, after serving in a series of senior ministerial positions under the Likud and Kadima factions, and after several unsuccessful attempts to be elected to their leadership, Sheetrit still does not give up. He continues to view the political arena as the correct venue from which to act to achieve a diplomatic agreement.

For years you have been talking about the Arab Peace Initiative, but have not succeeded in recruiting supporters. What do you see in it, that others don’t?

“The Arab Peace Initiative was relevant from its first day in 2002, when Saudi King Abdullah proposed it. Today, like then, I think that is the best idea that has ever been heard, through which we can achieve peace. At the time I was a Likud minister and I explained to anyone willing to listen, that the Arab League countries were promoting that plan because they feared a nuclear Iran, and their way to deal with the issue was by isolating the country. And that goal – isolating Iran – they hoped to achieve via the Arab Initiative.”

Sheetrit added: “I told Sharon – 'Arik, forget about the disengagement, there is something bigger that can bring about a comprehensive peace in the Middle East.' I told him, ‘Pick up the phone to the Saudi king and tell him that you accept the initiative as the basis for negotiations,’ but he preferred the disengagement.

“It is over a decade later, and it still remains the fastest and best path to achieve peace. Because it is a comprehensive initiative bringing 56 Islamic countries to the table who proclaim, ‘If you return to the 1967 borders and find a just and accepted solution for the refugees, we — all 56 Arab states — are ready to make full peace with Israel.’ That is an amazing thing. Since then, the Initiative was approved four times in Arab League conventions (the most recent was March 27). Only with us [Israelis], nothing doing. No prime minister wants to hear about it.”

Perhaps the saying, ‘Things you see from here, you don’t see from there’ is applicable in this case …

“In my eyes, it points to a most embarrassing blindness among our leaders. I presented the arguments favoring the Initiative, to every single Israeli prime minister in recent years. During the Arab League Summit in Riyadh [2007], when Ehud Olmert was prime minister, I told him that if I were in his place, I would do everything I could to get to that Summit and tell the leaders of the Arab countries, ‘let’s talk about it.’”

And how did it end?

“So Olmert also said ‘That’s the right thing to do,’ but didn’t do anything about it.”

Sheetrit says that he also tried to persuade Prime Minister Benjamin Netanyahu in his previous term of office, but without success. But Sheetrit doesn’t give up — now, as aforesaid, he is raising the idea again in the HaTenua faction.

“The logic is simple,” he explains. “I argue that no Palestinian leader will sign a peace agreement alone. Why? Because even if we agree to give them a state according to the 1967 lines, they still have to waive the right of return, and no Palestinian leader can do that without massive support of Arab countries. The only way to circumvent this obstacle is via the Arab Initiative.”

After President Barack Obama’s visit to the region, Sheetrit’s hopes regarding the Arab Initiative has been re-awakened. “When I hear now that United States Secretary of State John Kerry is in Israel to try to promote the idea, I am very satisfied. Finally, someone with brains. But in our parts, they don’t understand. You see, the earlier attempts ended in failure, because they [Israeli leaders] didn’t use the right language in speaking with the Arabs.”

“They didn’t address their culture, they didn’t try to put themselves in their shoes, to understand their problems. They didn’t talk to them in a way that they would understand that we want what’s good for them too. Instead they talked down and in a condescending manner, as if we know best what’s good for them. In general, our whole conduct vis-à-vis the Arabs is faulty in my eyes — those people who conduct negotiations with the Arabs, don’t know what Arabs are like.”

To support his argument, Sheetrit gives this example. “In 2000, after Prime Minister Ehud Barak returned from Camp David without an agreement, the United Nations Millennium Forum took place (in which more than 150 heads of state from all over the world participated). I was a Likud member at the time, and Barak invited me there as a representative of the opposition. Suddenly Palestinian chairperson Yasser Arafat entered the hall together with Palestinian officials Nabīl Shaath and Yasser Abed Rabbo. Arafat hugged me, and I asked him, 'Why didn’t you agree to take what President Bill Clinton and Barak offered you?' Abed Rabbo answered for him, ‘Forget it, Barak doesn’t want peace,’ and told me how Barak had ignored Arafat throughout the days that the two resided, isolated, in Camp David — except for one 20-minute meeting. ‘Barak didn’t even say good morning to Arafat,’ said Abed Rabbo.”

Sheetrit adds that when he turned to Barak and asked if the story was true, the latter answered with the following words: “Yes. What did you expect me to do?”

“That, to me, says it all. If I were in Barak’s place, I would have stuck to Arafat all week and would not have left him for a moment. I would try to create chemistry between us, to build a personal relationship; not try to get down to business right away. Unfortunately, total mistrust prevails between us and the Palestinians today. That’s why they fight over every comma.”

Are you saying that the culture gap is what prevents a peace agreement?

“Absolutely. When you send Ashkenazim [of Eastern European origin] to conduct negotiations with Arabs — that is what happens. If I were prime minister, I would take Druze and Arabs with me to the negotiations. It is an issue of having an elementary understanding of the culture, and unfortunately the culture gap creates great difficulty.”

Sheetrit continues to explain, “We speak one language, they speak another. When we talk from our viewpoint all the time, it doesn’t work. Therefore, the Arab Initiative can change this. Because you don’t conduct negotiations only with the Palestinians, but with the entire Arab world. That world is also tired of wars and hatred toward Israel.”

Shaul Mofaz, your former leader of Kadima, proposes an interim agreement and claims that there is no chance of attaining a permanent agreement in the near future.

“I say that’s nonsense. No one accepts that. The Palestinians reject it outright, because they want a state and not interim agreements. Interim agreements are the biggest mistake of the Oslo process. Why? Because they believed that if we advance step by step, we can create relations of trust that will help us to solve fundamental problems. But instead of attaining trust, we created distrust.”

Do you really believe that HaTenua, with its six mandates, will be able to jump-start a peace process in the same government composed of people such as former Foreign Minister Avigdor Liberman, HaBayit HaYehudi chairman Naftali Bennett, and the Likud’s extreme right-wing Knesset members?

“Netanyahu creates the impression that he’s moving toward change. To what extent is he really, profoundly serious? That depends only on him. He has an opportunity to be a leader and be remembered in history books. I told him, in a meeting between us: 'If you don’t make history, you will become history.’”

What is your opinion of Bennett and Yesh Atid leader Yair Lapid, who argue that the government must focus on social and civil issues?

“They are making a mistake and they’ll understand that very quickly. It is impossible to make economic and civil changes without peace. That is the reason that I have championed peace all my life.”