Former Communications Minister Moshe Kahlon's popularity after the cell phone reform he championed might be enough to establish a mid-sized party, but his lack of diplomatic or security experience will pit his path to the premiership. 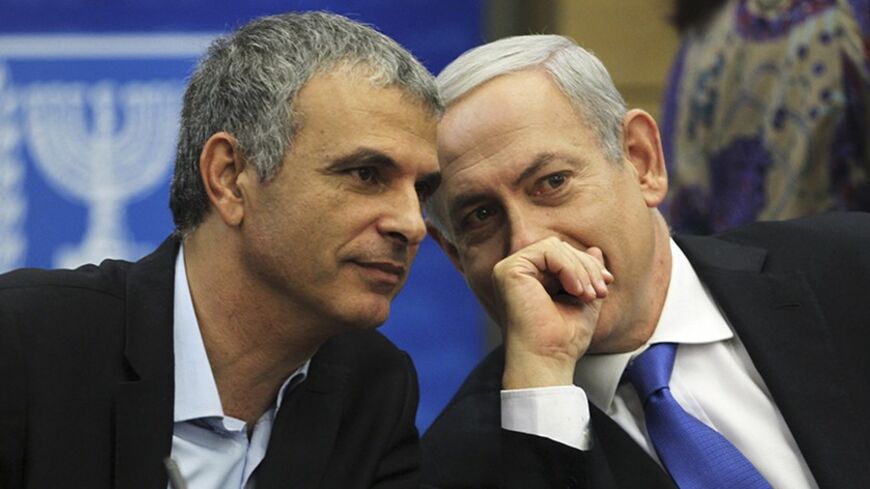 One day after former Communications Minister Moshe Kahlon's April 8 announcement that he plans to return to politics, a new poll offered Prime Minister Benjamin Netanyahu a sweet moment of pleasure amid all the crises he faces. The negotiations with the Palestinians have fallen apart, another employee complained about the prime minister’s wife and there is talk of new elections among members of both the coalition and the opposition. While none of these has caused the prime minister serious harm, they have been a nuisance.

According to polls published by Israeli TV Channel 10 and Israeli daily Globes, a new party headed by the former Likud minister would win 10 to 13 seats, taking most of its votes from the center-left parties, and particularly from Finance Minister Yair Lapid’s Yesh Atid. While that’s not bad for someone who hasn’t even created his party yet, it is a disappointing result for the most popular politician in the Likud. Based on the results of the poll, it looks like Kahlon will be unable to attract voters from the very party he left. A Channel 10 poll predicts for the Likud-Yisrael Beitenu party alliance two more mandates than it currently holds.

Kahlon's interview with Yedioth Ahronoth made major headlines after Kahlon accused the Likud of “folding up the social banner.” Netanyahu read that line and got nervous. The proximity of Kahlon’s indictment of the ruling party to the release of the state comptroller’s scathing report that the state has abandoned hundreds of thousands of its poorest citizens fit together well and added momentum to the former communications minister’s comeback.

Yet, while the polls were good to the Likud, Netanyahu’s relief is only temporary. Now that former Prime Minister Ehud Olmert and former Israel Defense Forces chief of staff Gabi Ashkenazi have been forced out of any race over criminal charges, Kahlon is his next threat to face. As the next elections grow closer, the question of whom would Kahlon recommend to the president to form a government will increasingly bother Netanyahu. And there is also Netanyahu's nightmare scenario, in which Kahlon teams up with Foreign Minister Avigdor Liberman to topple him as prime minister.

Over the past few months, Kahlon has served as head of the Center for Reform and Leadership at Netanya College. In that position, he oversees various working groups that are busy preparing position papers and action plans to resolve major social and economic illnesses, chief among them the housing crisis. He is in high demand as a lecturer on economic and social reforms and on leadership. All his comments on these issues make headlines in the economic press. On the evening of April 9, he spoke at “Politics on Tap” in the central city of Rishon LeZion. He presented his solution to the real estate bubble and spoke about bold leadership. His words left the impression that he intends to do more than just create a new party. He wants to run also for prime minister.

Kahlon is sophisticated enough as a politician to know not to position himself directly against Netanyahu over a future race for the premier's seat. On the other hand, quite a few people who have spoken to him in the last few months came away with the impression that the prime minister’s office is his ultimate goal. In the many long talks he has held with journalists and other politicians, he spoke freely about his intentions to establish a new party, the disappointment and even revulsion he feels toward Netanyahu and how he is looking for senior security figures to recruit to his party. He has even sent out feelers to Maj. Gen. (res.) Tal Russo.

Kahlon knows that without some well-known and highly regarded personalities from the security establishment at his side, he will be unable to break the barriers to becoming anything more than a mid-sized party, and as we have already noted, he has loftier ambitions. At the same time, he is still maintaining ties with key activists in the Likud and with the local Likud officials who were close to him, such as Shimon Sosan, head of the Modi’in Regional Council, to recruit them to his new party.

Contrary to his image as a politician devoid of passion or snobbery, Kahlon is actually ambitious and highly competitive. And despite what he wants everyone to believe, he has no lack of ego. That is why it is safe to assume that he is not returning to politics to play a secondary role.

Despite the success of the cell phone revolution he piloted as minister of communications, which led to a significant drop in costs, the reform effort itself might hardly be enough for the general public to deem Kahlon a potential candidate for prime minister. His lack of diplomatic-security experience will prove to be a disadvantage. In the last election (January 2013), the Israeli public proved that despite the social justice protest and the concurrent rise of economic issues on the agenda, it still wants a prime minister with experience in diplomatic and security issues.

Furthermore, at this stage it is still too early to determine the agenda of the next elections. Kahlon, who is now building a campaign based on finding a solution to the high price of housing, could find himself without an agenda if it turns out that the measures taken by Lapid to solve the real estate problem were successful. Another issue that requires clarification in Kahlon's case is his diplomatic worldview. Currently, and by no coincidence, his position is still rather vague. As someone who was opposed to late Prime Minister Ariel Sharon’s Gaza Disengagement Plan and who was close to the leader of the rebels, Minister of Tourism Uzi Landau, Kahlon well knows that positions such as these will scare off supporters from the center-left bloc, from which he draws most of his strength.

It would be no wild gamble to say that Kahlon will moderate his views very soon and shift more to the center. He already hinted as much in his interview with Yedioth Ahronoth, when he complained that the far right had taken over the Likud and insinuated that this was one of the reasons he resigned from the party.

What Kahlon forgot to mention was that he benefited from the votes of the far right for years in internal Likud elections to determine the Knesset list, but someone within the Likud is sure to remind him of this eventually. For years, his ties with the far right were actually very important to him, so much so in fact that he appointed Michael Puah, director-general of the “Jewish Leadership” political action group, as his adviser in the Ministry of Welfare just to increase his influence among that constituency. Puah also happens to be the right-hand man of Knesset member Moshe Feiglin, who controls thousands of far-right members of the Likud.

When Kahlon surprised everyone by announcing that he was taking a hiatus from political activity right on the eve of the last elections, he was at his high point. The public was wowed by the brave new minister, who managed to push through cell phone reform, saving hundreds of shekels a month for every home in Israel and dealing a blow to the communications magnates. He became a communications hero overnight. This only upset Netanyahu, who watched as Kahlon reaped the benefits from a move that he supported.

Since then, Kahlon’s popularity has soared in the polls. Other Likud ministers watched anxiously as the “kid from Givat Olga,” as he is called in political circles, stole the show right out from under them. The social justice protest that followed only served to strengthen him. But then his personal feud with Netanyahu erupted and reached its climax when the prime minister refused to promise him the position of finance minister after the elections. Kahlon claimed behind closed doors that Netanyahu was getting worried about his popularity, so he tried to harm his position and limit his moves.

He left with a bang, and for a very long time after that, he walked around with polls in his pocket showing that if he started his own party, he would win 20 seats and harm the Likud. In the end, Kahlon didn’t run in the elections. In fact, he even appeared in the Likud’s campaign commercials supporting Netanyahu. Then he left the country to attend an economics program at Harvard. By the time he returned to Israel, he was determined to get back into politics. Even if his political moves this week were at the top of the news, Kahlon’s party is still just a fashionable virtual one, at least for now. It may have a lot of potential, but there are a lot of questions surrounding it, too.