Pressure on Prime Minister Benjamin Netanyahu from opponents within and outside his coalition has grown in sync with advances in talks with the Palestinians. 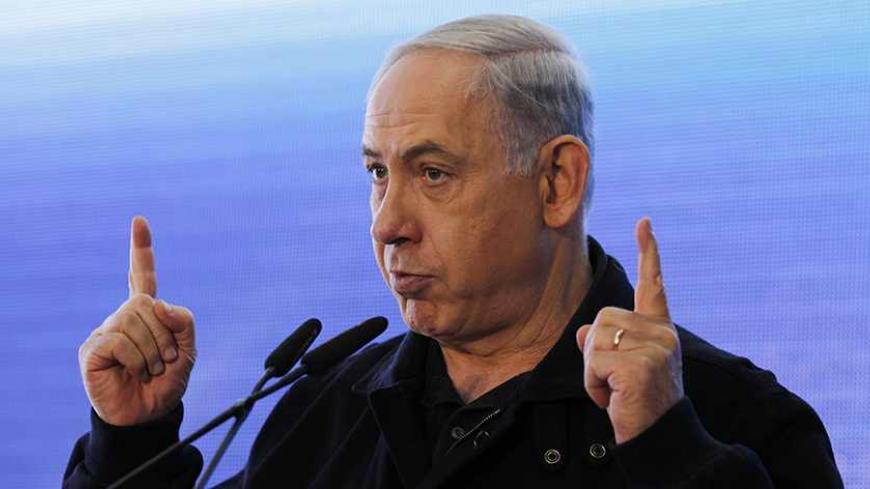 On Dec. 18, at the eleventh hour, Prime Minister Benjamin Netanyahu succeeded in torpedoing a bill that would have required an exceptional, two-thirds majority of 80 Knesset members before any negotiations about a possible partition of Jerusalem. The law threatened to tie Netanyahu’s hands and greatly embarrass him in the talks with the Palestinians and the Americans and vis-a-vis the centrist parties in his coalition. Now he will have to deal with a new bill with similar ramifications approved by the Ministerial Committee on Dec. 29. That bill demands Israel’s annexation of Jordan Valley lands conquered in the Six-Day War in 1967 to make it difficult for the government to offer diplomatic concessions regarding these territories.

Even if this bill, submitted by Likud Knesset member Miri Regev, eventually fails, a similar proposal in an earlier stage of legislative development awaits around the corner. The initiator of this bill is Knesset member Moti Yogev, from HaBayit HaYehudi, which is a member of the coalition and of the government.

Meanwhile, the head of this self-same government is the one who, in recent months, has been conducting accelerated negotiations with the Palestinians with the objective of reaching an agreement leading to the end of the conflict between the sides.

Yogev, a colonel in the reserves and a resident of the Dolev settlement, is one of the prominent spokesmen of the far-right bloc in the current Knesset. It was with great ease that he enlisted supporters for his bill from among numerous right-wing Knesset members from the opposition as well as the coalition, including from the Likud Party. Among his explanations for the proposal, he asserted, “Over the years, a consensus has been created regarding the importance of the Jordan Valley and its connection to Israel. … [T]he future of the Jordan Valley begins in the Israeli consciousness. Israel must decide to impose its sovereignty over this extensive area that has a relatively sparse Palestinian population, and openly say: 'The Jordan valley will remain under Israeli sovereignty forever and ever.'”

We can assume that the “Jordan Valley law, forever and ever” will meet with the same fate as the Jerusalem bill, but Yogev’s very attempt puts the coalition, and the peace efforts of US Secretary of State John Kerry, under an absurd light. Moreover, it shows how the structure of the present coalition is unsuitable for the diplomatic process.

Last weekend, Yogev sparred with fellow coalition and Knesset member Amram Mitzna (Hatnua Party), in the media. On the Israeli Channel 2 TV show Meet the Press, Mitzna, one of the left-wing coalition members, publicly called Kerry’s peace efforts “a ray of light in the darkness.” Yogev hurried to transmit a statement to the media that included insulting expressions about the secretary of state, among them, “Kerry has an anti-Israeli and pro-Palestinian stance, and is not an honest broker” and “He is not a ray of light, but a ray of darkness.” Regarding the State of Israel’s decision to release Palestinian prisoners Yogev alleged, “Kerry and Obama are partner to the murders because they force Israel to release those same murderers.” Political observers argue, with a certain amount of justification, that the ideological pressures and obstacles posed by the right benefit Netanyahu vis-a-vis the United States and the Israeli public, because they present him as the person navigating the negotiation ship through an almost impossible political reality, therefore granting him extra-credit.

In recent days, leaks from the negotiation rooms have taken over Israel’s political and media agendas. If these leaks are true, then very soon, maybe even next month, Kerry is expected to introduce an agreement-framework between Israel and the Palestinians containing the principles for resolving the core issues of the permanent arrangement. Publicity about these leaks has caused a real revolution in the public, political and media agendas. These agendas had been controlled by economic and social justice content since the protest of summer 2011, more than two years ago, with occasional sallies into the Iranian issue. This has undoubtedly been the longest period of time in memory since the first intifada that the Palestinian issue was not only excluded from the agenda but also replaced by a clearly civic agenda. One might have thought that the explosive, hemorrhaging conflict with the Palestinians had long been resolved. The Israeli public’s attention to the Palestinian issue died over time, in part because of the quiet, security-wise, in the territories, but also due to tiredness and despair over dozens of years of diplomatic failures.

Disregard of the Palestinian issue had been so flagrant that even the left and center Labor and Yesh Atid parties demonstrably ignored the issue in the last election campaign, devoting themselves instead to the social and economic agenda. This same agenda also dominated in the months after the establishment of the current government. Finance Minister Yair Lapid refused to be parted from the social justice economic agenda, as did his former ally, Economy and Trade Minister Naftali Bennett. The forced negotiations, conducted sluggishly in recent months and in great secrecy, allowed the political system to continue on its merry way, as if peace with the Palestinians had already been achieved. Netanyahu also enjoyed the quiet. He was able to maintain his coalition of opposites with relative ease, on the one hand liberating Palestinian prisoners and surviving [politically], and on the other hand making no significant concessions to the Palestinians.

Those days are over. The Palestinian issue returned to center stage for the first time at the end of last week. This was accompanied by headlines in the newspapers, television newscasts, radio broadcasts and on the Internet. They all dealt with the diplomatic process, the US proposal for security arrangements, the return of Kerry to the region next week and of course the third round of the prisoner release, which was greeted by demonstrations opposite the prime minister’s house. All these reports were accompanied by public brawling within the coalition, while the prime minister’s decision to authorize an additional construction program in the territories — to soften the fury of the right over the prisoner release — aroused harsh criticism among the Americans and Palestinians.

Current Science and Technology Minister (and former Shin Bet head) Yaakov Peri of Yesh Atid made waves when he announced, “We will have to evacuate about 25% of the territories and shut ourselves away in settlement blocs, and that is certainly a reasonable compromise, because there is no other alternative to the establishment of a Palestinian state.” His words remained on the public agenda throughout the weekend even though it was not the first time Peri had said such things as a minister; it was, however, the first time that his opinion was so widely covered in the media. Also in contrast to previous occasions, Peri’s words were received favorably by the head of his party, Lapid. In fact, Lapid has “discovered” the diplomatic issue over the recent weeks (for political reasons) and has adopted it warmly.

Peri’s statement was presented as a counter-response to Defense Minister Moshe "Bogie" Ya'alon of Likud, whose words at a meeting with businessmen last week had been published in Haaretz. According to the report (which has not been denied), Yaalon said that Israel has no partner for the agreement of two states and criticized the US proposals for security arrangements in the territories. “If we lose military freedom of movement, the West Bank will become Hamastan, there will be missiles on Tel Aviv and the economy will be destroyed,” he said. To this, Peri retorted, “One cannot sit in a government that is conducting negotiations and declare failure a priori.”

We can expect more and more diplomatic headlines in the coming week, and the weeks after that, and the return of the Palestinian issue to the top of the national list of priorities, from legislative initiatives and parliamentary activity to major reports or leaks from the negotiation rooms. On Jan. 2, a parliamentary lobby consisting of almost all the Knesset’s right-wing party members will conduct a tour of the Jordan Valley. Right-wing ministers are also supposed to join the group, including Interior Minister Gideon Saar (Likud). The contingent is expected to receive high-profile media coverage.

In this atmosphere, we will soon be witness to a worsening of right-wing rhetoric, even from high-level Likud members, whose support base in party institutions is mainly comprised of settlers and have maintained a low profile until now. This means that Netanyahu’s ideological opposition in his own party will become more vociferous and dangerous for him the more it emerges that he makes progress in the negotiations. This time, he will not even be able to escape to the time-worn safety of the Iranian threat, which has also been banished from the national agenda.