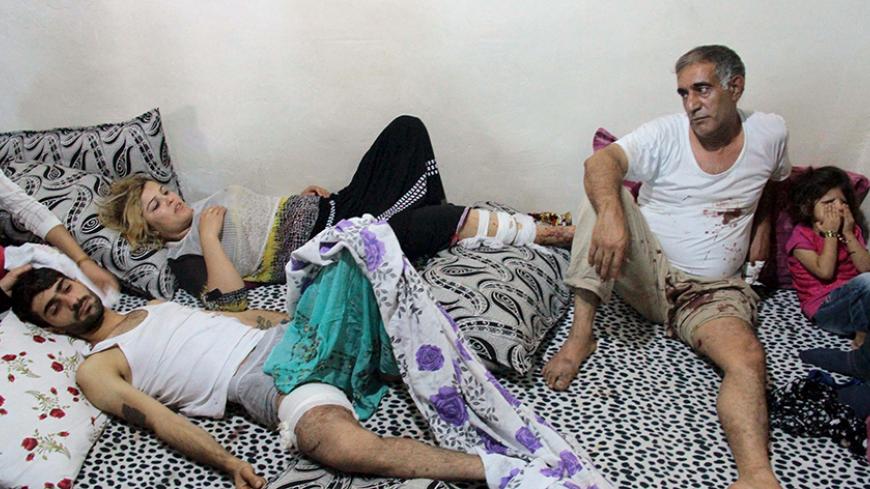 Wounded residents rest at a home in the southeastern town of Cizre in Sirnak province, Turkey, Sept. 12, 2015. - REUTERS/Sertac Kayar

CIZRE, Turkey — In the wee hours of Sept. 6, the Yaramis family in Turkey’s mainly Kurdish city of Cizre watched helplessly as their baby boy died before their eyes. Mehmet Tahir, only 25 days old, had fallen sick with fever the day before, but repeated calls for an ambulance were to no avail. Cizre was under a round-the-clock curfew as special police forces moved in for what officials described as an operation against Kurdish militants entrenched in residential areas. The Nur neighborhood where they live was right in the middle of the deadly clashes, and not even ambulances were allowed in.

“He died in my hands,” the boy’s distraught mother, Sosin Yaramis, told Al-Monitor after the weeklong curfew ended Sept. 12 and journalists entered the city. “We kept the body at home for two days and then in [a freezer] in the mosque.”

In another grim scene from Cizre, footage reportedly shot during the curfew shows an ambulance trying to navigate a residential area as a threatening voice shouts at the driver from a loudspeaker, “Get out! Don’t move or I’ll shoot!”

The rekindled conflict between Ankara and the Kurdistan Workers Party (PKK) has crippled medical services across the Kurdish-majority southeast. In Cizre alone, several civilians, including children, died from lack of treatment during the weeklong curfew — either of illnesses or from injuries from the clashes.

The conflict is prompting medical workers to flee the region. In one striking case, Dr. Azad Karagoz, a primary care physician, fled Cizre secretly with his two children and pregnant wife while the curfew was still on. With residents banned from going out for any reason, medics, too, could not go to their workplaces. Only two general practitioners remained on duty in the emergency room of the only state hospital in Cizre, a city of some 120,000 people.

With violence simmering across the southeast, unidentified assailants have attacked ambulances in Nusaybin and Tunceli, and at least two medical workers have perished in the unrest. One health care worker died in crossfire between the PKK and the security forces in Cizre, while a physician on his way to work was shot dead by PKK militants as he tried to escape the checkpoint they had set up on a road near Diyarbakir, the largest city of the southeast.

Scared off by the bloodshed, many health workers in the region have resigned or taken leave, raising alarms about medical services becoming badly paralyzed in the region.

Ramazan Bulbul, a member of the Health Assembly of the Democratic Society Congress, an umbrella organization for Kurdish civic groups in various fields, called for urgent measures to ensure that health services continue uninterrupted.

In an interview with Al-Monitor, Bulbul spoke of “a wave of resignations” in the health sector since late July, when the cease-fire between the PKK and Ankara collapsed and unrest spilled over to urban areas.

“In Varto, for instance, 17 doctors and other staff resigned. A couple of people resigned in Lice. Many resignations came from Cizre, where doctors could not go to work for a week [during the curfew]. Four people resigned in Silvan, as the hospital there stopped working,” he said.

“There are people volunteering to provide medical services, and they should not be obstructed. Over the past 40 days, things have come to a point where we have our hands tied. The basic requirements of public health — food and water — must be provided whatever the circumstances are. A mechanism should be established to ensure that preventive health care and the treatment of chronic diseases such as hypertension, diabetes and cancer can continue uninterrupted,” Bulbul added.

Seyhmus Gokalp, the Turkish Medical Association’s coordinator for the southeast, says anxiety and a desire to leave is widespread among health professionals, whose frustration is further amplified by the security forces often obstructing and bullying medical personnel and patients.

“There are specific cases we have documented. In Lice, for instance, an 18-year-old pharmacy employee was brought wounded to hospital. The person accompanying him was beaten up and the injured person himself was threatened with death by members of the special forces, who also broke doors [in the hospital]. In Silvan, the special forces opened fire on a health clinic and six vehicles in the yard were burned,” Gokalp told Al-Monitor.

He added, “In Cukurca, only two doctors remain from the town’s six doctors. One stays on duty in the emergency room around the clock, while the other does the administrative work. Ambulances are unable to bring patients from [nearby] Hakkari. … In Nusaybin, 15 out of 30 doctors had taken leave as of early August. The number of physicians in the emergency room fell from eight to two.”

Because of the risks on rural roads, people in remote villages and towns are particularly affected. Gokalp warned that the disruption of vaccination programs for children in rural areas poses serious risks to public health. An emergency room doctor in Diyarbakir, meanwhile, told Al-Monitor on condition of anonymity that births in his hospital had fallen to around 35 per day from the usual average of 80 to 100, because the number of patients coming from rural areas has significantly decreased. In the emergency room, meanwhile, he is now seeing less than 50 patients per day, down from the usual average of 80.

Gokalp urged the parties to the conflict to respect the Geneva Convention, which sets humanitarian standards for civilians and the wounded in conflict zones.

“The security forces in particular must end their pressure on medical workers. … We call on all parties, all armed forces and all who wield power in their hands to act in a way that facilitates the work of health workers,” he said. “We urge and plead with both sides: Whenever an ambulance enters a street, put your guns down; whenever you hear the siren of an ambulance, take your fingers off the trigger and wait for it to finish its job.”