Is Turkey on brink of more violence?

Increasingly militarized conflict between the Turkish state and the PKK has brought Turkey to the brink of a new spiral of violence. 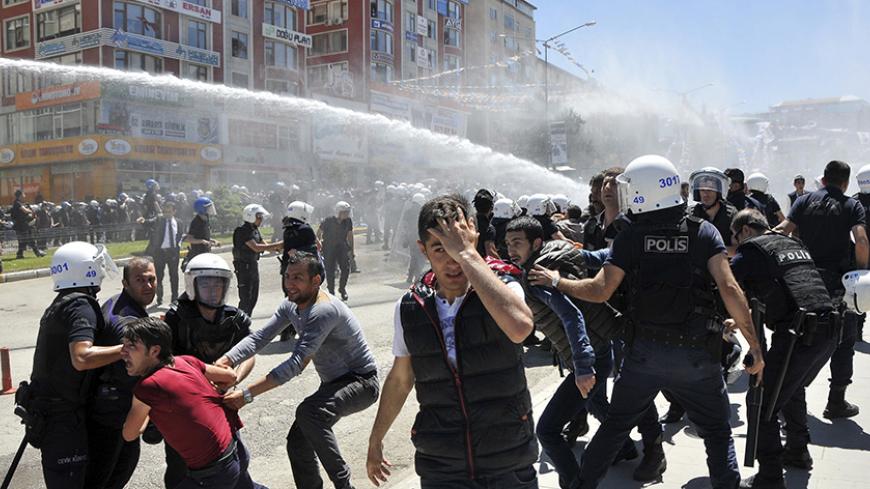 The spectacular success of the pro-Kurdish Peoples’ Democratic Party (HDP) in Turkey’s June 7 general elections gave rise to fresh hopes for peace and the beginning of a new democratization process, but unrest is not giving up without a fight.

The HDP garnered 13.1% of the national vote and won 80 seats in parliament, with about 1.1 million non-Kurdish citizens voting for it. Although HDP Co-chair Selahattin Demirtas issued a call July 14 for the Kurdistan Workers Party (PKK) to lay down its arms, reports from the field suggest that it will not be all that easy for the HDP to free itself from perceptions of being a mere instrument of the Kurdish movement’s military wing instead of an independent, civilian element of the movement.

Armed clashes erupted at the end of June between the Turkish army and PKK militants in the Daglica region, on the Turkey-Iraq border. On June 30, for the first time in two years, Turkish warplanes bombed PKK positions in the area. The Uludere region was already considered a hot zone, according to the state, because of cross-border smuggling, or as the local people see it, because of traditional border trading.

Ankara has been tense since Tell Abyad was taken from Islamic State fighters by the military wing of the US-supported Kurdish Democratic Union Party and by the possibility of the Kurds advancing westward to establish links with Afrin.

In the major cities, including Ankara, Istanbul and Diyarbakir, and the Kurdish-majority towns of Cizre, Mardin, Sirnak, Siirt, Silopi and Yuksekova, clashes between security forces and the Patriotic Revolutionary Youth Movement (YDG-H) have become almost routine. The YDG-H is the youth branch of the Union of Kurdish Communities (KCK), which in turn is the armed extension of the PKK in urban areas.

On July 11, the KCK announced the end of the cease-fire that had been declared at the end of 2012. The announcement bluntly established as the PKK’s priority targets the dams, fortified outposts and roads being constructed in heavily Kurdish-populated east and southeast Anatolia. In its declaration, the KCK tried to avoid being seen as the culprit in ending the peace process by terminating the cease-fire, which had been welcomed by the Turkish public. In this respect, it warned that it will retaliate if the state does not halt all infrastructure works that “have military objectives and seek to intimidate the Kurds.”

A day after the KCK's announcement, PKK military Cmdr. Murat Karayilan issued additional remarks. He said, “It was our naivete not to halt the withdrawal after the cease-fire,” pointing to the shaky status of the solution process. Then, that same day in rural Ardahan, villagers — who according to official accounts were visiting PKK militants but according to local accounts were going picnicking — came under fire. One person was killed, and two others were wounded. Local sources said soldiers were responsible, while the official version blamed the PKK.

Meanwhile, the HDP has not gotten its institutional structure in order. Its organizational capacity is sorely lacking in local politics, in understanding the workings of the state bureaucracy and in formulating foreign policy and security doctrines. This deficiency naturally makes it difficult for the party to become a determinant of national policy issues. Despite the high expectations surrounding it, the HDP does not appear capable of steering the solution process.

On the other hand, the party's electoral success seems to have sparked a crisis in civilian-military relations in Kurdish politics. The KCK, which views the HDP as usurping part of its role, appears to be trying to impose an “armed tutelage” over the party. How a civilian HDP will neutralize this move by the KCK and ensure civilian control over Kurdish politics has vital bearing on the future of the solution process.

The Turkish military command, instead of trying to decipher the changing nature of the clashes in the east and southeast, continues to stick to its traditional terror-centric approach, labeling each confrontation in the southeast as terrorism. This rigid approach serves to amplify the tensions in the region. Moreover, the current civilian political vacuum in the country gives the military considerable room to maneuver, with the freedom to do what it chooses, especially at the local level.

The shortcomings of governors and sub-governors in security affairs and their inexperience in crisis management are also contributing to rising temperatures in the field. In addition, the increasingly intolerant nationalist rhetoric of President Recep Tayyip Erdogan and politicians from his Justice and Development Party are eroding the solution process and contributing to exacerbating tensions.

If new clashes break out between security forces and the PKK, the dynamics will be much different this time. Clashes will shift from rural areas to cities and are likely to involve spontaneous street confrontations spearheaded by young people trying to create “liberated zones.” The PKK is now capable of mobilizing thousands of civilians in conflict zones to use them as human shields. Although it increases the risk of civilian casualties, such a tactic could give the PKK the strategic upper hand on the ground, as seen in the latest Ardahan clashes.

Moreover, the PKK had in the past confined its attacks to military targets, so the declaration of its intention to attack dams, roads and other infrastructure projects in mostly Kurdish-populated regions was totally unexpected. It won’t, however, be a surprise if pro-PKK hackers launch their first cyberattacks against traffic and public utilities in attempts to bring life to a standstill in major cities.

For the Turkish security forces, technology is emerging as the most important force multiplier in any new clashes. The military, which has taken major steps in the use of armed unmanned aerial vehicle technology and air-to-surface, precision-guided munitions, might focus its attacks on the PKK’s leadership instead of PKK militants in the field. The army’s light armored infantry units have been gaining experience in operating in urban environments.

In short, the new normal will be more urbanized and less violent with more technological confrontations requiring more civilian involvement. Cyberspace and social media will be used more effectively.

To this former soldier turned academic, Turkey’s official “separatist terror” narrative is insufficient for explaining the violent relationship between the PKK and Turkish security forces. The struggle between the Turkish state and the PKK — which has adopted the goal of a “federal Turkey” instead of an “independent Kurdistan” — can be better understood by analyzing the insurgency and counterinsurgency.

The PKK's growing international legitimacy, the existence of a negotiating forum in the solution process and the parties recognizing each other as interlocutors leads me to define this violent relationship as a federalist insurgency rather than separatist terror. At this phase, there is a key role for the HDP to play. The dynamic of violence must be controlled by Kurdish civilian politics, and the military element of the Kurdish movement must be brought under civilian control. Otherwise, both Kurdish politics and Turkey could pay dearly for the new conflict dynamics.