While no group has yet to claim responsibility for the attack, Ankara is pointing the finger at the outlawed Kurdistan Workers Party. 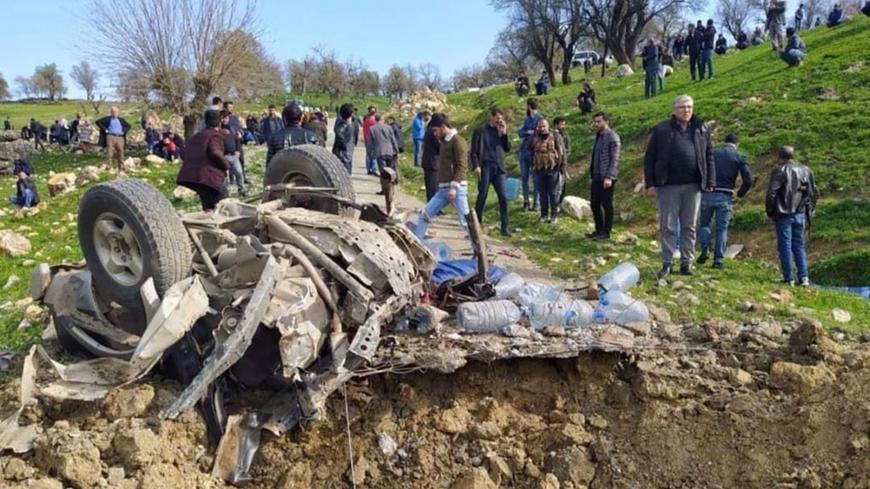 People gather at the site of a roadside bombing in Gulec, Turkey, April 8, 2020. - Twitter/@metesohtaoglu

Five civilians are dead following a car bombing in Turkey’s restive southeast, local officials said Wednesday. According to a statement from the governor’s office in the Kurdish-populated Diyarbakir province, roadside bombs hit a car carrying a group of forestry workers in the town of Gulec in the Kulp district.

Security forces are now looking for the perpetrators, which the governor’s office said were "members of the PKK terror organization," referring to the armed insurgent group inside Turkey known as the Kurdistan Workers Party.

On Twitter, Turkey's parliament speaker Mustafa Sentop accused the PKK of orchestrating the “treacherous attack,” writing, "The separatist terror organization PKK has shown its nefarious face once again. The traitors will get the response they deserve.”

Fahrettin Altun, the communications director for Turkey’s President Recep Tayyip Erdogan, tweeted that the "fight against terrorism does not slow down, even today."

No group has yet claimed responsibility for the bombing.

The PKK’s decades-long violent insurgency against the Turkish state has left more than 40,000 people dead on both sides. After the collapse of a two-year-old cease-fire, fighting reignited between Turkey and the group in July 2015. Last year, several people died in a similar bombing in Kulp that authorities also blamed on PKK militants.

Ankara, the United States and the European Union all label the Kurdish militant group a terrorist organization.

In October 2019, Turkey launched a military operation in northern Syria to drive away from its border the Kurdish-led Syrian Democratic Forces, elements of which Ankara views as terrorists linked to the PKK.

Last year, more than two dozen democratically elected mayors from the pro-Kurdish Peoples' Democratic Party (HDP) were sacked and replaced with state appointees over alleged ties to the PKK. Accused of terror links, former HDP leader Selahattin Demirtas has been in jail for more than three years.