In the wake of the March 19 suicide attack in Istanbul, Turks are questioning why security vulnerabilities increase as police visibility and power increase. 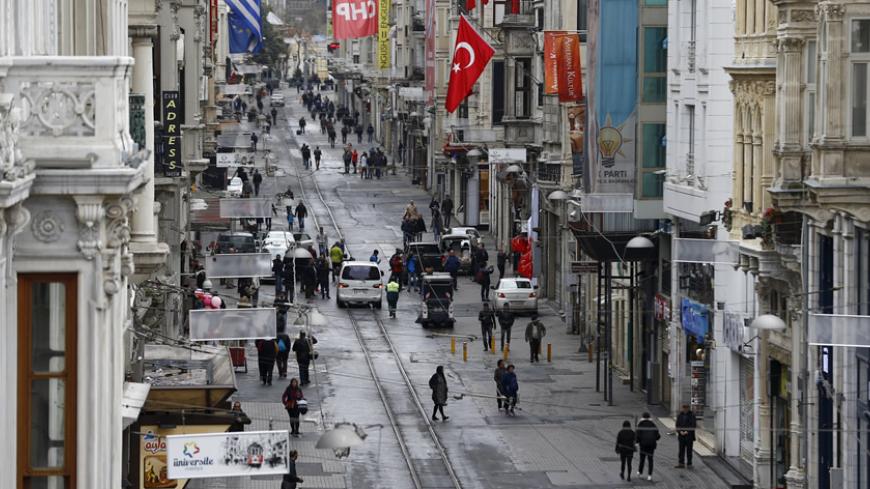 Around 11 a.m. March 19, there was a loud explosion on Istiklal Street in the Beyoglu district in Istanbul. The attack claimed the lives of four people and a male suicide bomber, leaving over 30 injured. The latest news indicates that among the victims were two American-Israeli dual citizens, an Israeli and an Iranian; at least five tourists who were part of an Israeli culinary tour group of 14 were injured. Most of the other wounded were Turks and foreign tourists.

The Israeli government sent two planes to repatriate the bodies of the three dead Israelis and evacuated the five wounded to Israeli hospitals. Israel is now trying to determine, in cooperation with Turkish security officials, whether the Israeli tour group was targeted specifically or whether it was just in the wrong place at the wrong time.

Istiklal Street is the most popular street in the center of Istanbul. Since the 1850s, it has been an area where multiculturalism has flourished: non-Muslims of the Ottoman Empire, businessmen from all around the world as well as the embassies of the main European powers settled in the district, which is now an amazing collection of shops, art venues and pubs. It is a must-see for any tourist. It is also within walking distance to the old imperial city, the Galata Tower and several churches and mosques. The street has been closed off to cars, allowing pedestrians to enjoy a leisurely stroll and listen to street musicians, eat street food and shop. The street ends at Taksim Square, the focal point of political protests in Istanbul. Hence, the area is patrolled by riot police.

Since October, Turkey has been on heightened alert following the repeated bombings and protests in city centers — with a death toll surpassing that of a number of terror-wrecked cities such as Kabul.

The alert also was in effect for this week's Nowruz spring equinox celebrations, which the Kurds celebrate; Nowruz fell on March 20 this year.

Immediately after the March 19 attack, the public speculated that the Kurdistan Workers Party (PKK) or the Kurdish Freedom Falcons (TAK) was responsible, but as details started emerging from the investigation that focused on the security cameras in the area, the main suspect appeared to be a member of the Islamic State (IS).

Indeed, there were allegations that the suicide bomber was one of the four most-wanted IS members in Turkey. DNA tests identified Mehmet Ozturk, a Turkish citizen known to be affiliated with IS, as the bomber.

A former United Nations official who is intimately familiar with Middle East politics warned against knee-jerk reactions to such incidents. “Before automatically pointing at the PKK as the perpetrator, our so-called security experts should have remembered that the Kurds are on excellent terms with the Israelis and they cooperate in many fields. No Kurd would have authorized such an attack against Israelis,” he said. “Such ignorant blabbing is but another indicator of the pathetic state of our security."

The public and official reactions to the suicide attack were mixed. This time, rather than senior Justice and Development Party (AKP) officials, Istanbul Gov. Vasip Sahin was the first to offer a reaction. The media reported March 18 that he had said the German Embassy’s cautionary decision of shutting down its offices due to possible terror threats was exaggerated. After the suicide bombing on Istiklal Street, Sahin claimed the terror attack in Istanbul was unrelated to what the German Embassy’s actions and announcements had hinted at.

It was not only Sahin who provided mind-numbing explanations. On Twitter, Irem Aktas, the head of the media relations and women's outreach department of one of the AKP’s Istanbul municipalities, tweeted, “I wish it had been worse. I wish all Israeli citizens would have died, not just injured.” Her reaction caused an uproar. AKP officials said that Aktas’ words do not represent the AKP, and that she is to be promptly expelled from the party.

Pro-government media outlets chose to quietly ignore Aktas’ reaction to the event and rather focused on the news that pro-Kurdish Peoples' Democratic Party (HDP) members danced with joy in Antalya. The Sabah daily reported, “On the day that Turkey mourns the victims of a terror attack, HDP members want to dance.” Indeed, HDP members had gathered to celebrate Nowruz in Antalya and allegedly started shouting slogans in Kurdish such as “Long live Apo” (the nickname for Abdullah Ocalan, the imprisoned PKK leader) before police asked them to disperse. Garo Paylan, an HDP parliamentarian, told the police chief that they would disperse after finishing a Turkish folk dance (halay). Pro-government media outlets and social media embellished Paylan’s words while also criticizing Selahattin Demirtas, the HDP’s chairman, for not altering his Nowruz celebration schedule.

Yet the opposition ridiculed Health Minister Mehmet Muezzinoglu’s reaction detailing the number and identity of the victims. He went on the record saying, “Even if they are foreigners, we are still losing human lives.”

Turkish Prime Minister Ahmet Davutoglu condemned the attack with a lengthy speech during which he said, “As a country we always stood firm against terror, we said terror knows no religion, language or ethnicity — we should combat all kinds. This sad event validates how appropriate our approach to terrorism has been.”

But the public’s mood on March 19 in Ankara and Istanbul was one of unease. Not many people agreed with Davutoglu’s claim that the government’s approach was effective. Indeed, in the afternoon, Istanbul’s Beyoglu district resembled Ankara’s weeklong deserted streets. Right after the attack, Al-Monitor visited several different areas close to Istiklal Street, which was promptly closed off to the public until late in the evening. In the Galata neighborhood, around the Galata Tower, several shops had shut down around midday. One shopkeeper selling soaps and bathrobes told Al-Monitor, “We lost Russian tourists after the government shot down the Russian plane [November]; then came the bombing at Sultanahmet Square [mid-January] and we lost German tourists. Millions of people in Istanbul earn their livelihood in the hospitality industry and IS and the PKK have just put the last nail in our coffins.”

As he spoke, several other shopkeepers shook their heads and concurred with him. One of them said, “We keep seeing more police and fewer tourists around here. There has to be another way.”

Although it is too soon to jump to conclusions, a senior bureaucrat likened the attack in Istanbul to the one in Sultanahmet, where a German tourist group was targeted. The two cases have multiple common features: a suicide bomber targeting busy tourist hubs and foreign groups. Yet the impact is felt by everyone in the city, not just tourists. Almost all public areas are deserted; traffic was light for a Saturday evening and people looked at each other with fear and suspicion, wondering if the worst could be over.