Istanbul’s most famous avenue falling into urban decay is a sign of economic hardship awaiting Turkey in the near future. 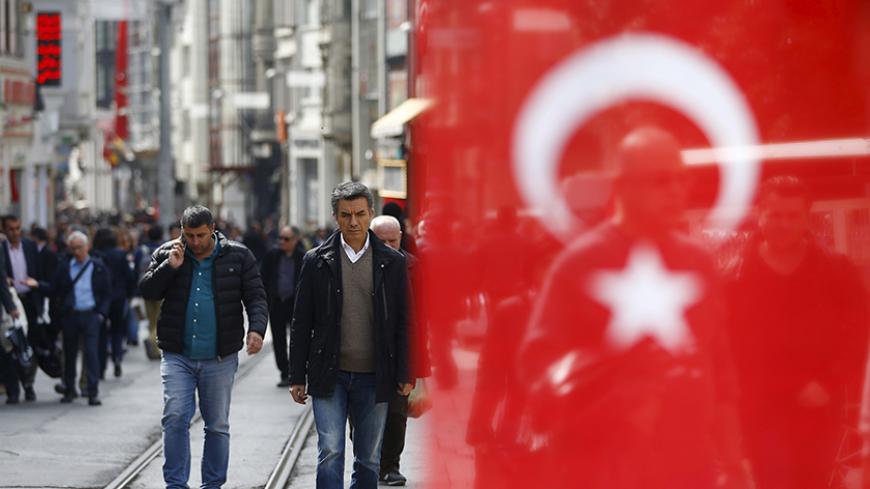 Istiklal Avenue is one of the most photographed streets in Istanbul. Situated in the heart of the Beyoglu entertainment district, Istiklal (formerly known as Grand Rue de Pera and Cadde-i Kebir) is a wide avenue adjoining several historic streets from Karakoy Port, Galata Tower and Taksim Square. The red streetcar from the Ottoman days is probably the best-known image of the avenue, which has long become the symbol of Istanbul.

Istiklal Avenue has been viewed as a relatively successful gentrification example of the Beyoglu beautification effort compared to other areas. With political gatherings of all sorts, popular cultural events, countless shops and an active nightlife, it was the place to be seen.

Fancy cafes, international chains and upscale restaurants replaced the seedy underground lifestyles of the back alleys for which Beyoglu was notorious in the 1980s and 1990s. At one time, no trip to Istanbul would be complete without strolling down Istiklal Avenue, enjoying the different scents of foods, watching the bustle and diversity of a cosmopolitan city and viewing street musicians from all over the world. Almost all are gone now.

The glitter of Istiklal Avenue is fading, and the deterioration is acknowledged in the graffiti-decorated shutters of abandoned businesses. Erdem Dilbaz, a resident of Beyoglu for 15 years, has been taking pictures of all the businesses shut down in Istiklal this summer. His photo archive has generated a preliminary report by the 140 Journos network. Several international brands left Istiklal Avenue in the last three months, and almost none of the emptied lots have been rented. Starbucks, Columbia Sportswear, Pizza Hut, Teknosa, Media Markt, Otto, House Cafe, MidPoint and Mama Shelter along with prominent Turkish establishments such as Pasabahce have shut their doors. Several of the vendors in Istiklal told Al-Monitor that the first flight of major businesses was in September 2015, when telecommunication giant Turkcell, with its 2,000 employees and thousands of daily customers, took off from the neighborhood.

Why have the upscale stores fled from Istiklal? Indeed, the incompetent city planning and greedy regulations of Beyoglu municipality should be held responsible for the current situation. With the slogan of gentrification, Ahmet Misbah Demircan, the district’s mayor from the Justice and Development Party (AKP), repeatedly told the press that in his vision Istiklal Avenue was just a big shopping mall. Gradually, yet diligently, Demircan and his party altered the identity of Beyoglu.

Despite diligent resistance from the district’s businessmen, the AKP established a city ordinance where all street tables were banned in July 2011. It is crucial to understand that life in Istanbul and especially in Beyoglu happens on the street. Establishments have been paying the municipality for each table regularly, but it was not sufficient. Cafes, small taverns and pubs were all negatively affected. In addition, rigid alcohol regulations also made it difficult for small establishments to survive. In the meantime, the Beyoglu municipality added 2,200 new business licenses for entertainment places, increasing competition to an unprecedented level. Making the survival of old and unique businesses against big chains impossible, consumption taxes and entertainment taxes were increased. Overnight, the entertainment tax was increased 6,600%, which butchered the struggling arts and entertainment industry to its core. Changing the sidewalks every season with loud and disturbing machines did not help the businesses in the neighborhood, either. The municipality had also declared a war on the trees, so much so that now only a few trees remain at the Huseyin Aga Mosque’s entrance.

As historic businesses left Beyoglu one by one, mega shopping malls and upscale chain restaurants replaced them. These upscale businesses could have lasted longer had it not been for a series of unrelenting terror attacks and disastrous foreign policy adventures dramatically curbing tourism.

Banking on an increasing number of visitors, Demircan bragged about the increasing number of beds since 2006 from 6,000 to 21,000 in 2014 and finally to 45,000 in 2016. Yet in the summer of 2016, he also had to accept that 80% of those beds were empty, as the tourism sector collapsed. Demircan acknowledged the reality of Beyoglu falling into disrepair and decrepitude. Declaring global forces to be the culprit of these difficulties, he promised that Istiklal will soon go back to its days of glamour because the municipality is launching a smart Beyoglu portal. Although he would not explain what the portal would do, there are a handful of YouTube videos available in Turkish where small Beyoglu establishments introduce themselves under the banner of smart Beyoglu.

Yet strolling up and down Istiklal Avenue one cannot help but realize the loss of vibrancy. The regular crowds — families, tourists from all over the world, college-aged youth, young lovers and street entertainers — are no longer there. There are quite a few young, idle-looking men and a few tourists.

Al-Monitor spoke with several establishments struggling to survive in Beyoglu. The famous confectionery Ali Muhiddin Haci Bekir, established in 1777 and operating from Beyoglu since the early 1900s, and the 100-year-old Cumhuriyet Tavern and Cumhuriyet Soup Restaurant concurred that in the last 36 months they have been just barely breaking even and praying the tide will turn. However, it has been getting worse. When reminded of the crowds, a senior member of the Haci Bekir confectionary told Al-Monitor, “Look around, these are not your regular tourists. They come here for either a nose job or hair implants from poor Arab countries. No longer Iranians or Gulf tourists. We used to play a guessing game of where the customers are from among the staff here. There has not been a single American or European visitor in months.” At the Cumhuriyet Soup Restaurant, one customer chimed in, “They forced out all beer serving places promising champagne for glamorous Beyoglu. Now we have none.”

The remaining places try to stay in business by posting signs in Arabic, while middle- and upper-middle-class Turks are further turned off Istiklal Avenue, as hookah shops and decadent nightclubs replace taverns. In the back alleys, drug pushers and prostitutes are visible before dusk, and the police seem to look the other way while petty crime is on the rise. Even the remaining bookstores no longer sell Istanbul memorabilia. When Al-Monitor asked why, one storekeeper replied, “No one buys it.”

While the current news in Turkey report only the recent flight of popular chains from Istiklal Avenue, the neighboring streets are not doing any better. Bagdat Avenue, Karakoy and other popular areas where housing prices have skyrocketed are facing tough times. The property values declined more than 20%, and the owners no longer demand payment in US dollars.

Beyoglu’s gentrification has become a victim of “hedonistic neoliberalism,” a term used by Vasif Kortun, the director of SALT Art Center. SALT Beyoglu shut its doors in January 2016.

If streets leading to Istiklal Avenue tell the story of Istanbul, then we must brace for approaching hard times. To understand what I mean, leave Beyoglu behind, take a stroll from the Egyptian Spice Market into the meandering streets of the Mahmutpasa businesses, and finish at the Grand Bazaar. You will quickly observe the jostling crowds are long gone. Ask Grand Bazaar shopkeepers how their businesses are and they will tell you in unison they have not sold even half of their inventory from last year.

Overall, Beyoglu is likely to remain animated by its continuous creative restlessness and survive the rough tides; however, if the economic hardship is prolonged, how long can Turkey ride the tide of recession?