State-led gentrification of Istanbul might be the most important and irreversible legacy of the conservative Islamist AKP government. 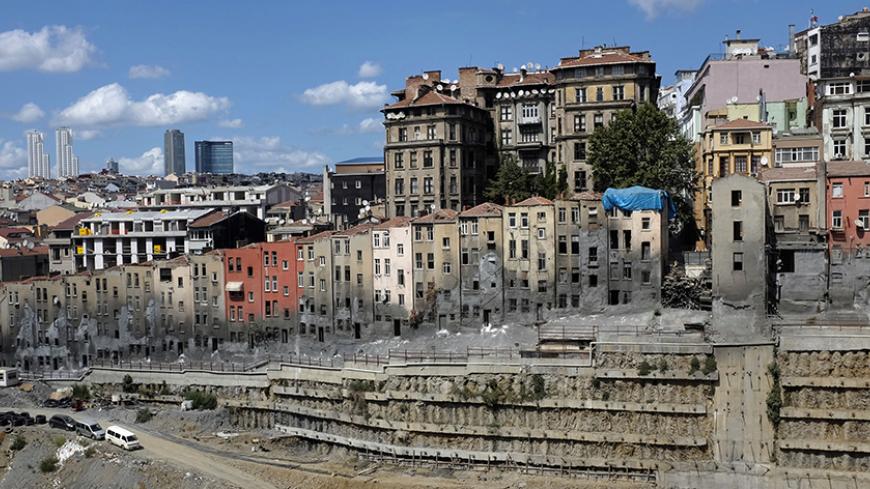 Emptied old buildings are seen at a construction site in the Beyoglu district in central Istanbul, Aug. 29, 2014.

Hurriyet daily posted June 30 a story titled “Putting Breaks on Tarlabasi,” announcing that the decision of the Council of State (Danistay, the highest administrative court) on the Urban Transformation Project of Tarlabasi was guilty of “not serving [the] public good” and should be halted. This decision could set a precedent for several other mega urban transformation projects of the Justice and Development Party (AKP) era. Yet on July 2, pro-AKP newspapers published news with the photo of Ahmet Misbah Demircan, mayor of Beyoglu district, denying the news. Demircan told the press, “All court cases against the project have resulted in our favor. The urbanization project of Tarlabasi continues full speed.”

Tarlabasi is located in the center of Istanbul. Being the hub of social and economic life in Istanbul, it was settled by non-Muslims during the Ottoman era. Serving as residences for those who worked in Beyoglu, Tarlabasi was home to Jews, Greeks and Armenians. Most of the buildings date back to the 19th century. Yet the glorious days are gone, along with the non-Muslim population of the district. A series of unfortunate events, such as 1942 wealth tax on non-Muslims, riots against Greek Orthodox citizens that destroyed their businesses and residences in 1955, and legislation requiring the departure of Greeks in 1964 has affected Tarlabasi significantly. These abandoned residences in walking distance to the commercial district provided ample opportunities for inner-city squatting.

In 1986, the demolition of more than 300 Levantine buildings to construct Tarlabasi Boulevard expedited the social, economic and physical decay of the neighborhood beyond repair. It was the beginning of “ghettoization” or “slummization” of the neighborhood. Seasoned journalist Isa Tarlabasi produced a searing documentary titled “Step Child of Beyoglu: Tarlabasi” in 2012. Tatlican, who was born and raised in Tarlabasi, explained the process of gentrification to Al-Monitor. “Neither of the news is necessarily wrong. There were grievances as the project progressed, but it is not possible to halt it at this stage as several buildings have already been demolished,” said Tatlican. He projects a sober view of the district. On the one hand, he is sad that not more buildings could be preserved in their original spirit; on the other hand, he acknowledges the depth of decay causing health and safety concerns.

The sterile “Disneyfication” process is a top-down approach advised by the then prime minister, now President Recep Tayyip Erdogan. The first stage of the Tarlabasi project designated 278 buildings in nine blocks as a renewal zone in February 2006. Rather unusually, Tarlabasi was put on a tender by the Beyoglu municipality. On April 2007, a private developer, GAP Construction Company, won the bid. Interestingly, GAP is a part of Calik Holding Group, infamous in Turkey due to its ties to the AKP. The CEO of Calik was Berat Albayrak, Erdogan's son-in-law.

In 2006, promising to turn Tarlabasi into the Champs Elysees of Istanbul, Demircan initiated the mind-boggling process of destroying historic buildings that have been under state protection since 1993.

This has been possible because the AKP has successfully passed a legislation, known as Law 5366, on June 16, 2005.

Not only is the Tarlabasi district in a prime location for profit, but also the notorious Law 5366 established that all transactions and costs within the project area are exempt from taxes and duties. In real terms, this means an extra 30-35% increase in profit.

City and government officials working in sync with the private GAP Construction Company with strong legal, coercive and financial powers, publicized Tarlabasi as a crime-ridden, rotten neighborhood that cannot be saved unless completely destroyed and rebuilt. It was easy to project this horrid image of Tarlabasi as it has harbored legally vulnerable and culturally marginalized populations. Tolga Islam, associate professor of urban planning at Yildiz Technical University in Istanbul, told Al-Monitor, “In the renewal plans, all buildings are designed to have underground parking where residents could pull in with their cars and reach their flats without having to go out of the complex.” This kind of planning has some implications: First, from the initial stage of planning, when renewal plans were designed with the goal of building of new estates, renovation was possible just for a few buildings. Second, as Islam said, “The project was designed with middle- and upper-middle-class residents in mind for these new buildings who own cars and who would rather not step outside to the neighborhood for security reasons.”

Indeed, the image of Tarlabasi has deteriorated significantly in the AKP era. After state-led gentrification plans were revealed, many academics, attorneys and architects along with artists visited the district. In all interviews, residents go on the record that the municipal services have steadily deteriorated. Trash piles on the narrow streets, empty houses are left unattended for squatters and corrupt local authorities have facilitated drugs, prostitution and other illegal activities. In the midst of all this, there are also families. Lacking any parks or socialization spaces, little kids play on the busy streets. Almost half of the population of Tarlabasi is estimated as Kurds who are displaced from their towns. There are also waves of illegal and legal immigrants from Africa, Iraq and Syria who are struggling to make a living. Tarlabasi hosts a sizable transvestite population as well, along with Romans who have long worked in the entertainment sector of Beyoglu nightlife. Poverty may be the only common factor that brings together such a diverse population in this secluded area.

With such colorful residents, Tarlabasi has resisted the crude gentrification process. Erdal Aybek, an impressive community organizer and the former spokesman for the Tarlabasi Solidarity Organization for Property Owners and Tenants, told Al-Monitor, “Seventy-five percent of the Tarlabasi population are tenants. Initially, they were voiceless. If you painted your building without proper permits, you would get fined thousands of dollars. All of a sudden, it has become acceptable to completely destroy these historic buildings, which were allegedly under state protection.” Aybek explained in detail that there were hundreds of individual court cases against the municipality as people resisted eviction since 2008. Yet once evicted, they could no longer remain in the Beyoglu area. Rents are simply too high for their budget. Aybek said, “Hundreds of people, families have not only lost their shelter, but also their livelihood. Having to move to the outskirts of Istanbul, they can no longer financially afford to work in Beyoglu.” Tarlabasi residents — mostly below the poverty line and sustaining on black market activities — were legally not savvy enough to carry a long-haul resistance against the profit-seeking companies. That said, they even reached out to UNESCO and achieved support from the organization.

However, it has become more than that. Being a no-go zone for middle- and upper-class Turks, Tarlabasi has welcomed international students, scholars, journalists and artists. When you walk along a narrow hill of Tarlabasi, you will most likely see freshly laundered clothing hung to dry. Aybek told Al-Monitor, “Those clothes lines are rolling strings from one window to the other across the street. One day one neighbor hangs their laundry; next day is the other’s turn. What was destroyed in Tarlabasi was not just centuries-old buildings, but human relations. People who had nowhere else to go found a way to live and establish social bonds here.”

There is no sign yet that Tarlabasi is evolving into the Champs Elysees of Beyoglu, but its streets have beautiful names. In 2006, Yorgo, an elderly Greek Orthodox who refused to leave the land he was born on had poignantly observed, “Where there is no history and social bonds, they number the streets.”