The last remaining Jewish merchant on Istanbul's historic Istiklal Avenue is facing eviction, made legal by a new landlord-tenant law, by a Catholic church. 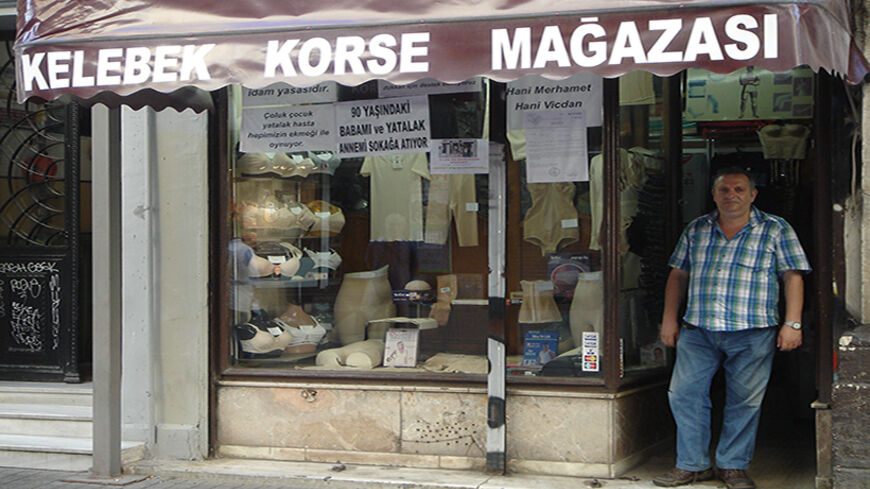 Known in the 19th century as the Grand Rue de Pera, Istiklal Avenue had its own merchant culture. Business owners and their clients built friendships, enjoyed tea and coffee together and looked after each other. No man dared show himself on Istiklal unless he was wearing a suit and tie; women were reluctant to be seen in anything but their best dresses and hats. Istiklal’s heyday came to a sudden end, however, on Sept. 6, 1955. In one night, the avenue’s minority shops were reduced to rubble and many Greek homes were invaded and damaged. Afterward, Greeks emigrated en masse. Many of Istanbul’s Jews, also affected by the pogrom, followed. The grand avenue and its beautiful Ottoman-era buildings crumbled, but a few stubborn old-time shopkeepers continued operating in their landmark locations until very recently. Now only Kelebek Corset Shop remains.

Surrounded by the generic chain stores and fast food restaurants, Kelebek stands out like a museum piece. Its shop window is filled with men’s and women’s corsets, bras and other undergarments displayed on neat headless mannequins. Behind the glass hangs a modest wooden panel bearing the shop's name. Everything looks as if it has been transported by time machine from the 1950s. Yet its orthopedic hosiery and corsets are still in demand. Turkey’s film and television industries make regular orders for their casts, and many locals of both sexes would not dream of buying undergarments anywhere else.

“My parents are Karaite Jewish Turks, and my wife and children are Sephardic,” says Avramoglu, switching between Turkish and Greek. “My family has lived in Istanbul since Byzantine times. My grandfather opened his first corset shop in Terkos Arcade, across the way, in the 1920s. Back then there were no corset factories in Turkey. Armenian, Greek, Jewish and Turkish women sewed made-to-order corsets in their homes and delivered them to us. In 1936 my grandfather moved the business to this location.”

Kelebek means "butterfly" in Turkish. Avramoglu’s grandfather chose it because he wanted women to feel as light as butterflies in his corsets. Pointing to the tiny wainscoted mezzanine above the shop door, Avramoglu continues, “My grandfather bought three sewing machines in 1936. Our seamstresses produced our corsets in house. We also began having some of our products produced in new factories. During the September 1955 pogrom, Kelebek was attacked along with other Greek and Jewish shops in the area.”

Avramoglu goes to the back of the shop, lifts plastic bags hanging from a wall hook and shows me the hatchet gashes left during the 1955 assault. Kelebek is probably the last business in Istiklal still bearing the scars of the pogrom. If Kelebek closes, the material history of the Sept. 6-7 events will be lost.

“All our wares were destroyed in 1955,” says Avramoglu, “but we rebuilt and have been here ever since. I know this shop centimeter by centimeter. We haven’t changed a thing since my grandfather’s day. Most of the woodwork is original, although some had to be restored in 1955. We love Istiklal, and Istiklal loves us.”

Avramoglu supports his bedridden elderly parents, his wife, his two children, a divorced sister and his sister’s children with Kelebek’s profits. The prospect of losing the shop pains him not only because his family history is tied to it, but also because his survival depends upon it.

“Father Claudio Cecevelli, the Italian priest who used to represent Saint Mary Draperis, was a saint. Really, he was one of the best people to ever walk this earth, may he rest in peace. Two foreign priests took his place. I don’t care what a person’s religion is, whether he is Jewish, Christian or Muslim. I am Karaite Jewish. We believe in tolerance. We believe that all prayers go to the same place. I only care if a person has a good heart or not. But those new priests don’t understand our history. If I lose my shop, I don’t know how I’ll cope. I’m not a rich man.”

The bell of Istiklal’s antique red trolley rings three times as it passes. An Arab family enters the shop. Avramoglu welcomes them with the traditional Islamic greeting of peace, "as-salaam alaikum," and then continues assisting them in English. When a Parisian woman comes inside looking for a bra, polyglot Avramoglu responds in French. He didn’t learn these languages in order to communicate with tourists. Istanbul’s minority merchants have a centuries-old tradition of multilingualism.

Avramoglu reminisces, “Safiye Ayla, one of Turkey’s most famous singers and a favorite of Ataturk, was a regular customer. She had a problem with her lower back. We made special corsets for her, just like this one.” He points to a model in the shop window. “There are things here that you can’t get anywhere else in Turkey.”

When asked what Istiklal was like forty years ago, Avramoglu replies, “Back then, you had to be somebody to get into the exclusive pastry shops like Markiz and Lebon. You had to be properly dressed, elegant and cultured. Kelebek is part of that culture, part of Istanbul’s history. No one wants it to disappear.”

Avramoglu hopes that public support, both domestic and international, and a Change.org petition to His Holiness Pope Francis will convince Saint Mary Draperis to reverse its decision. “Otherwise,” he says, “the 1955 pogrom continues to the present day.”