Will Non-Muslims Return to Turkey?

Although Turkey's Minister of Culture Omer Celik of the AKP is inviting Turkey's non-Muslims to return to their country, many do not feel welcome because of a complicted history, writes Orhan Kemal Cengiz. 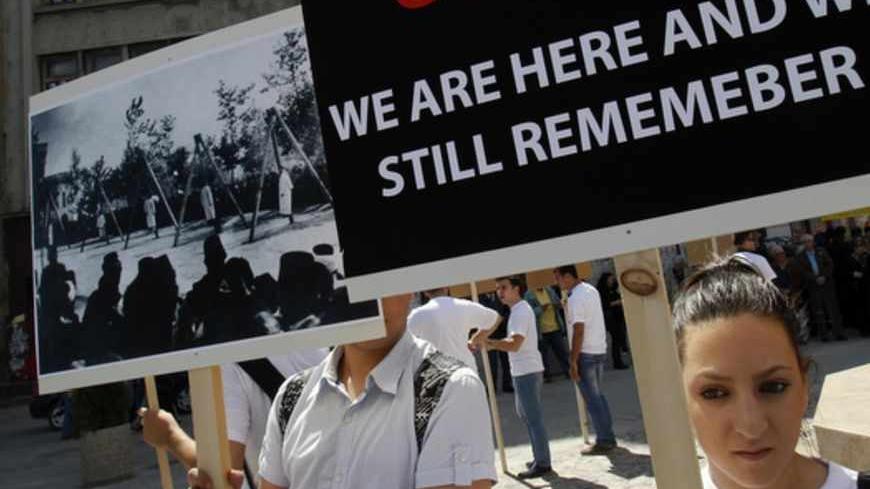 Members of the Armenian community in Romania hold banners during a rally marking the anniversary of mass killings of Armenians in the Ottoman Empire in 1915, in downtown Bucharest, April 24, 2012. - REUTERS/Bogdan Criste

Omer Celik, minister of culture of Turkey's Justice and Development Party (AKP) government, has made repeated calls recently in which he invited non-Muslims to come back to Turkey. In his most recent TV interview on March 29, Prime Minister Tayyip Erdogan himself repeated this call and he said their government is calling non-Muslims back to Turkey. Do these calls have any potential to create a mass return of non-Muslims to Turkey? Has Turkey made profound changes in the way it handles its non-Muslim citizens?

I do not think that these questions have simple yes-or-no answers. Before I try to give my own answers, I have to give little bit background to illustrate to what extent Turkey’s non-Muslim policies have changed.

Some of these people certainly had fallen victim to massacres in 1915 and onward. Some had left the country in population exchanges with Greece, and some went to Israel. But during the whole Republican era, non-Muslims continued to leave the country to escape from the endless suffering they were subjected to. In 1934, Jews were targeted in the Thrace region, their homes and shops looted. In 1942, the so-called “wealth tax” dealt a huge blow to all non-Muslims who had to sell everything in their possession to pay these extremely arbitrary fees. In September 1955, Istanbul’s Greek and Armenian residents fell victim to a two-day brutal pogrom. In 1974, with an extremely arbitrary judgment by the Supreme Court of Appeals, non-Muslim foundations lost all properties they had gained since 1936, as a result of legal tricks created by courts which made their acquisitions illegal.

I do not want to suffocate you with all the details of this extremely complicated history. But all these pogroms, financial tricks and attacks were different applications of a fait accompli strategy to get rid of every single non-Muslim from Turkey. This strategy’s application started in 1915 with the massacres of Armenians by the Committee of Union and Progress (CUP) and continued during the whole Republican era by so-called deep-state elements which inherited the its traditions.

Here we come to one mind-boggling element which makes it extremely difficult for outsiders to understand Turkey. The people who were trying to create a nation-state by getting rid of non-Muslims were the same who modernized the country. But this secular elite was also the one who oppressed pious Muslims for not fitting the "ideal citizen" role they wanted to create in Turkey.

It is obvious that the AKP, which consists of conservative and pious Muslims, is not an inheritor of this tradition. Therefore, it is not a coincidence that non-Muslims of Turkey have been going through their most comfortable period, relatively, since the beginning of Turkish Republic in 1923.

However, not coming from the CUP tradition does not mean that the AKP is immune from this nationalist virus which created a hell for non-Muslims in Turkey.

For example, when Erdogan cites different ethnic identities to show how heterogeneous Turkey is, he never adds non-Muslims to his long list of Kurds, Turks, Circassians and so forth. His government has never considered making an apology for 1915. On the contrary, they continued the old denialist attitude of the former elites when it comes to the Armenian genocide.

The AKP put an end to the deep-rooted fait accompli strategy against non-Muslims, but they were not able to create a profound change in this area. All improvements remained unfinished, uncompleted. For example, they allowed non-Muslims to use their historic churches in different parts of the country; however, this permission was only given one single day a year. The government has restored some churches, but it did not returned them to their historic owners, instead recognizing them as "museums." The government changed the law of foundations to allow non-Muslims to gain new properties, but they gave back only limited numbers of the properties that were taken from these foundations. The Halki Theological School is still closed. It is this government that interfered with the election process in the Armenian patriarchate to get their favorite candidate chosen.

When the Assyrian people started to return their traditional lands in southeast Turkey, feeling assured by the policies of this government, the 1,600-year-old Mor Gabriel monastery faced a devastating legal struggle, in which the treasury claimed to be the owner of its lands. The treasury won the case, and the Assyrian community, whose faith in the government has been shaken to the ground, is now planning to take the case to the European Court of Human Rights.

The essence of this story is this: This government has ended the hostile and devastating policies of the secular nationalist elites, but they could not create a new paradigm to reassure everyone that there will be no return to the past and that a new Turkey, as far as non-Muslims are concerned, is established. We are not there yet.

Orhan Kemal Cengiz (born in 1968) is a human rights lawyer, columnist and former president of the Human Rights Agenda Association, a respected Turkish NGO that works on human rights issues ranging from the prevention of torture to the rights of the mentally disabled.