Turkey has been secretly coding its Armenian, Greek, Jewish, Syriac and other non-Muslim minorities since the beginning of the republic in 1923. 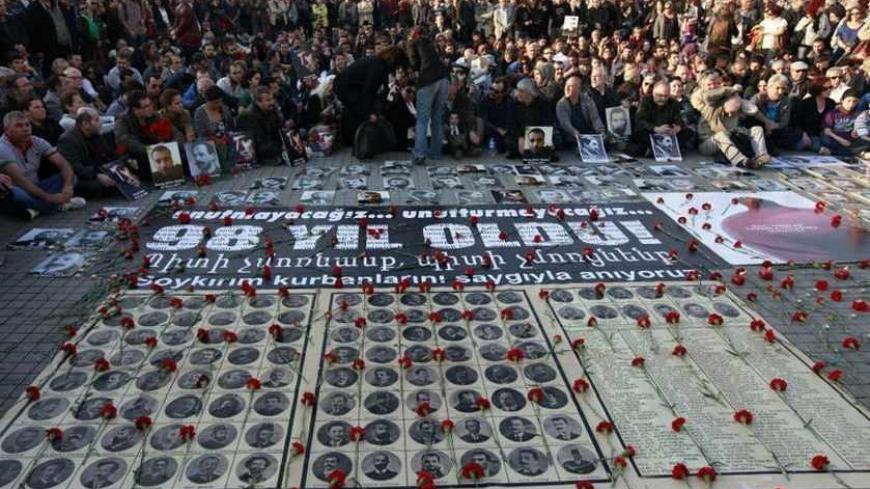 Human rights activists sit behind pictures of Armenian victims, at Taksim Square in central Istanbul, April 24, 2013, during a demonstration to commemorate the 1915 mass killing of Armenians in the Ottoman Empire. - REUTERS/Osman Orsal

It all started when a mother in Istanbul tried to enroll her child at an Armenian school. Like so many other Armenians who wanted to save themselves from the 1915 massacre, this woman's family had converted to Islam. Now she wanted to assume the identity of her ancestors. She underwent baptism, and her identity card was changed to show she is a Christian.

She thought her identity as a Christian would be enough to enroll her child at an Armenian school, but she soon found that it would not be so easy. There were bureaucratic steps to be taken. She was told, “You must get an official certification from the National Education Office attesting that there is no impediment to your [child's] enrollment in this school.”

The family went to the local National Education Office and requested a document allowing the child to be enrolled at the Armenian school. The written response of the Istanbul-Sisli District National Education Office was a shocker: “It is required to know whether the parent of the student to be enrolled had changed religion, name and sect by a court decision. Therefore her confidential ancestry code must be extracted from the population register [maintained] since 1923. The said student can be registered if his parent’s confidential code is 2 at the relevant population and citizenship directorate register.”

Research by the daily Radikal and interviews with officials following the news reports confirmed a century-long saga of discrimination. Registering populations using “ancestry codes” dates back to the 1923 Lausanne Treaty. According to Radikal’s findings, the Population Directorate codes Greeks using the number 1, Armenians 2 and Jews 3.

Officials told Radikal that the ancestry codes are only for regulating who will be allowed to enroll in the educational institutions of minorities. Further research by Radikal, however, revealed that this pretext is false. This became evident when it was discovered that the Syriacs were coded as number 4 and other non-Muslims as number 5. The minorities coded 1, 2, and 3, indeed, have their own schools, but Syriacs and other minorities do not.

This is obviously a scandal that should shake Turkey to its core, but the country is so busy with its own agenda. Given Turkey’s history, which is full of unfair practices toward non-Muslims, perhaps the significance of this scandal can best be understood through comparison. For a moment, imagine that Jews in Germany today were secretly being identified through coding by the German government and that this was exposed. It would register as a political earthquake big enough to shake the German political system down to its roots. In contrast, the scandal in Turkey remained in the news only for a few days in a few newspapers.

What has been exposed is a practice that some suspected of existing, but could not prove. For instance, there is not a single non-Muslim in the Turkish military or security services today. Turkey has not had a Jewish colonel, a police chief of Greek origin or a judge of Armenian extraction. It appears that the confidential coding of ancestry has been used to ensure that should non-Muslims change their identities, they still can be excluded from public service.

This ongoing practice will perhaps initiate a fresh review of a number of events in Turkish history. For example, was the 1946 Wealth Tax, essentially aimed at non-Muslims, enabled by coding ancestry? Did the coding play a part in the 1934 pogroms against Jews in Thrace and in 1955 when homes and residences of ethnic Greek citizens were ransacked? Further, does this practice confirm that all the policies of the Union and Progress regime that ethnically cleansed Turkey of Armenians in 1915 were adopted in their entirety by the Turkish Republic established in 1923? Is population coding institutionalized racism? What kind of invisible walls were erected around the non-Muslims of Turkey with these codes? How did (and does) it restrict their lives?

There so many questions we must ask about the sufferings of the non-Muslims. These newly discovered ancestry codes might also indicate how important and urgent it is for Turkey to deal with its past.

We are now waiting with great interest to see whether Turkey's non-Muslim minorities will take legal action after learning about the coding. According to the law, the government is required to pay compensation for “service faults” it has committed. Because of this legislation, Turkey's non-Muslims can sue for such discriminatory practices at administrative courts and then at the Constitutional Court. If no satisfactory outcome is derived from domestic legal recourses, then there is the possibility of  taking the matter to the European Court of Human Rights and UN bodies.

This ancestry coding scandal is actually a golden opportunity to take a fresh look at the history of modern Turkey, the hardships non-Muslins have endured and Turkey’s discrimination issues. Perhaps the country will make use of this opportunity.