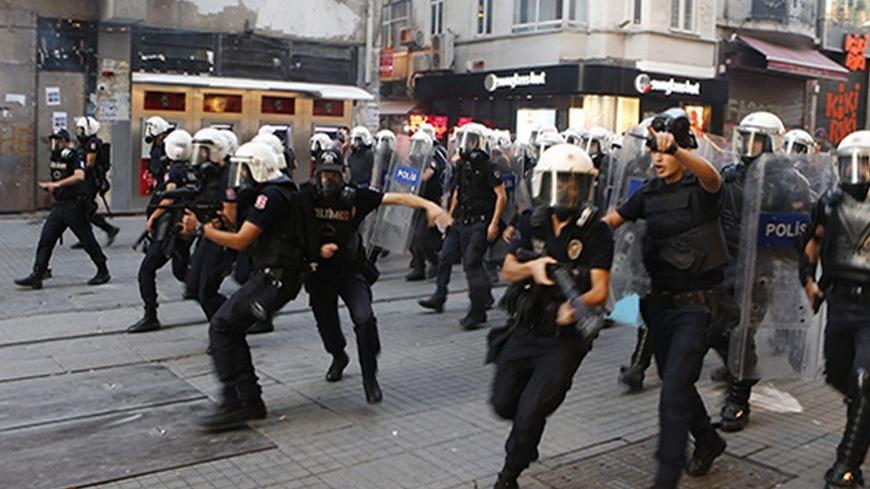 Even though no such rule exists on the books, it so happens that not even one single non-Muslim army officer, policeman or judge exists in Turkey. Non-Muslims are absent not only from the security and judiciary establishment but from the public sector altogether. Why? Is it because of their small numbers?

Turkey’s non-Muslim population today is estimated at about 100,000. According to figures by the London-based Minority Rights Group International, it includes 23,000 Jews, 3,000 Greeks, 60,000 Armenians and 15,000 Syriacs. In addition, there are Turkish converts to Protestant Christianity, estimated to number between 3,000 and 5,000.

Could it be a coincidence that none of those 100,000-plus people are public servants? In an Aug. 8 article for Al-Monitor, I wrote about how non-Muslims are marked with secret codes in the birth registers. This practice became public knowledge by mere chance earlier this year when a woman, who applied to enroll her child in an Armenian school, received a reply from the Education Ministry which revealed that birth registration offices have been using ancestry codes to secretly mark citizens of Greek, Armenian, Jewish and Syriac origin.

In any other country, such revelation would have sparked a huge outcry and long occupied the public agenda, but in Turkey it merited only short-lived media coverage before being forgotten. The coding practice, in fact, provides an indirect explanation of why non-Muslims fail to become public servants in Turkey, since birth registration offices appear to keep records of ethnic and religious origins even after people change names or convert, almost like a permanent “criminal record.” The practice suggests that whenever a non-Muslim applies to become a police or army officer, the “secret” information in birth registries instantly flows to the related institutions.

The veto that non-Muslims face in the public sector came under the spotlight again this week through an intriguing incident. The spiritual leader of Turkey’s Syriacs, acting Patriarch Yusuf Cetin, gave an interview to the Milliyet daily, in which he questioned why “people of other faiths are not assigned posts in public administration, the military and the police.”

The directorate-general of police responded in a message on its official Twitter feed: “Mr. Yusuf Cetin, the Istanbul Metropolitan of the Syrian Orthodox Church, has made remarks asking why Syriac citizens are absent from the police department. All citizens of the Turkish Republic, regardless of religion, race and sect, are able to become police officers. We invite our Syriac citizens, too, to enter the exams of the police department and become police officers.”

The Hurriyet Daily News reported that representatives of Turkey’s non-Muslim communities greeted the message with skepticism. They stressed that the problem cannot be resolved with just an appeal and that the discrimination non-Muslims face in the public sector under unwritten rules cannot be eradicated overnight.

In a comprehensive article on the police department’s tweet, Armenian columnist Aris Nalci explained why the appeal was not as easy to heed as the police suggested it might be. The article, published on the T24 news website, drew attention to the “police oath” that officers are required to take before assuming duty. The text includes lines in which officers swear “to adhere faithfully to Turkish nationalism” and to “endorse” and “work for” the values of “the Turkish nation.”

The oath, as Nalci points out, clearly shuts out those of non-Turkish ethnicity. In another intriguing paragraph, Nalci recounted his own experience when he dreamed of becoming an army officer and attempted to enroll in a military academy after high school.

“It was 1997. I faint-heartedly telephoned the Air Force Academy. After the greeting, I asked about the enrollment procedure. They eagerly put me through to the enrollment officer — it seems not many people were calling that year. The first thing the clerk — or whoever he was — asked, was my name. It took him about five minutes to decipher my name and then the line went dead. I had already been nervous about whether I was being monitored. So I did not call back. But now when I remember that day, I believe he definitely hung up because of my name. … ‘Hi! I want to be a pilot. My name is Aris,’” Nalci wrote.

I agree with Aris that the line went dead because his name indicated he was an Armenian. Set aside becoming army officers; we all know the many troubles and rampant discrimination that non-Muslims go through even when they do their military service, compulsory for all male citizens of the Turkish Republic.

True, the police department’s public appeal on non-Muslims to apply is an encouraging sign. But a whole lot of far-reaching measures are needed to eradicate the discrimination religious minorities suffer and the policy to bar them from public service. First and foremost, the removal of ancestry codes from birth registers.

Nonetheless, the police department’s statement inspires hope, even if a thin one. Who knows, maybe we will see Turkey’s Christians and Jews in uniform one day.