On the 60th anniversary of the Istanbul pogroms, Turkey’s exiled minorities and their descendants are demanding acknowledgment and restitution from the Turkish state. 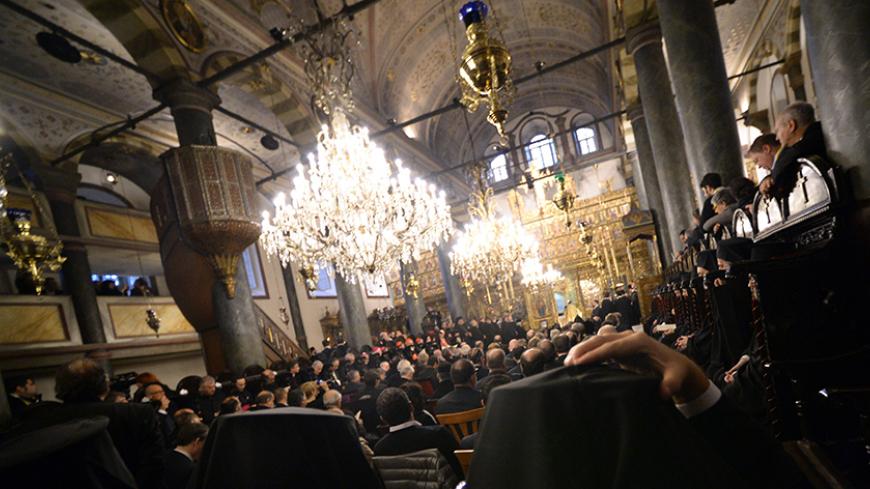 Sept. 6-7 marked the 60th anniversary of pogroms against non-Muslims in Istanbul that forced thousands to emigrate from Turkey. For the first time, the city’s remaining non-Muslims, now a dwindling community, held a church service to honor the victims of the pogroms.

Riots erupted on Sept. 6, 1955, after a newspaper fabricated a report of a bomb attack on the house in which Ataturk was born in the Greek city of Thessaloniki. Turkish-Greek relations had soured at the time over the future of Cyprus. Turkish mobs that were clearly pre-organized took to the streets, attacking and plundering homes and shops owned by non-Muslims, mainly Greeks. Churches and cemeteries were vandalized. Several non-Muslims were killed and many injured.

The service was held at the St. George Greek Orthodox Church, which was damaged in the riots. “The memories of the Greeks remain alive on the 60th anniversary of the deplorable Sept. 6-7 events,” read an announcement from the church in the Greek-language newspaper Apoyevmatini. Representatives of the Jewish, Armenian and Syriac communities also attended the service.

Jewish businessman Ralf Arditti, now 70, was a 10-year-old boy at the time of the pogroms. In an interview with Al-Monitor, he recounted his memories of Sept. 6, 1955: “We were in our house on Buyukada [one of Istanbul’s Princes’ Islands]. I was sleeping when suddenly the noise began. My father woke me up. He took us to the Anatolia Club, which was 50 meters down the street. The club was a state-owned place where parliament members stayed. So it was supposed to be safe and we took refuge there. A huge mob was coming on boats. They were not residents of the island. While rushing to the club, I saw men with sticks in the distance. We waited until the next morning for the unrest to abate. When we stepped out in the early hours of the morning, we saw that the seafront restaurants, sweet shops and offices owned by non-Muslims were destroyed. They were all plundered. My family agonized over whether to stay or leave Turkey. Eventually they decided to stay despite all the difficulties.”

Lydia Franco Albukrek, a 69-year-old Jewish woman, was 6 when she witnessed the riots. In an interview with Al-Monitor, she recounted how a truck full of men came to their street. She described what happened afterward: “The men on the truck were shouting ‘Cyprus is Turkish.’ There was a furniture shop across the street, which I guess was owned by Greeks. They stopped there and broke the windows, throwing armchairs into the street and cutting their upholstery with knives. ‘Hang your flags, turn on your lights,’ they shouted. I remember my mother trembling and looking for a [Turkish] flag in the house, which she eventually found and hung up. The unrest continued until 8 or 9 p.m. After we went to bed, we heard police sirens after midnight. I realized police had not intervened until then. We had a shop in Beyoglu [Istanbul’s main commercial area]. As the events unfolded, my father kept calling the shop to ask the watchman what was going on. We went to Beyoglu the next day. The whole Istiklal Street was littered with goods and cloth batches from the shops. It was as if a war or an earthquake had happened. The events forced us to leave Turkey.” Albukrek’s family immigrated to Italy. In later years she would return to Istanbul, where she is still living.

During the two days of pogroms, the state authorities had vanished from the streets as the mobs rampaged. It would later emerge that the unrest was orchestrated by the so-called deep state. In striking confessions 36 years later, Sabri Yirmibesoglu, who was a four-star general in a military unit affiliated with the Turkish General Staff at the time, gleefully revealed that the pogroms were organized by the Special Warfare Department, often referred to as the “Turkish Gladio.”

“Sept. 6-7 was the work of Special Warfare. It was brilliantly organized and achieved its objective. Wasn’t it a brilliant organization?” he boasted in an interview with journalist Faith Gullapoglu.

The pogroms forced thousands of non-Muslim Turkish citizens to leave the country. Those who stayed behind would face occasional similar attacks in the following years. Nikolaos Uzunoglu, an Istanbul-born Greek, was only 4 in 1955 and has only a dim recollection of the events. But he remembers well how his family struggled in the 1960s.

“I experienced closely the oppressive and very aggressive atmosphere that prevailed in 1964-1966 in particular. This atmosphere was created by the press of the era, which obeyed the orders it received,” Uzunoglu told Al-Monitor in an interview over email. “The last straw came on July 20, 1974, when our house in [Istanbul’s district of] Kadikoy was stoned. Thank God the young Turkish teacher who lived downstairs protected us. Two years later we left Turkey.”

Uzunoglu, who now lives in Greece, heads the Universal Federation of Istanbul Greeks, which represents more than 100,000 people who were forced to emigrate from Istanbul to various countries across the world.

Uzunoglu worries the tiny Greek minority that remains in the city will die out completely in a decade if action is not taken. To prevent this, the federation, backed by Greek foundations in Istanbul, started a project last year in cooperation with the Turkish government’s Directorate for Turks Abroad and Related Communities.

“As part of the project, second- and third-generation Greek youths who were not born in Istanbul have made trips to Turkey. Our actual demand, however, is the introduction of comprehensive, long-term programs to allow young people [who have roots in] Istanbul or the islands of Gokceada and Bozcaada to return to their ancestral lands,” Uzunoglu told Al-Monitor.

“We’ve submitted a list [of demands] to the government for the return of the Greeks. It includes citizenship rights, the creation of job opportunities for young Greeks in Istanbul, the resolution of the problems of Greek schools and community foundations, the restitution of properties and a settlement to the institutional problem of the Patriarchate,” he said.

Last month, the federation wrote letters to the Turkish parliament’s presidency and the parties represented in the legislature calling for an official parliamentary condemnation of the pogroms and the encouragement of returns. Mithat Sincar, a lawmaker for the Kurdish-dominated Peoples’ Democratic Party, brought up the pogroms in a parliamentary question to the Interior Ministry, demanding an apology on behalf of the state.

An official condemnation of the pogroms and other acts of discrimination that have targeted non-Muslims over the years would be welcomed not only as a ceremonial gesture but also as a sign of a will to prevent such acts from being repeated in the future.